The Group is Starrstruck

Tracey trailed behind the group as she took a moment to herself. Things were finally looking up, and it appeared as if she found a group willing enough to help her in her search. Well, she thought, not including Mr. Berkley. She fished into her pocket and pulled out Mr. Porter’s spectacles and ring. It was nearly impossible for him to have reached two distant locations so quickly, and yet both were undeniably his own. She studied the carriages in the street beside herself, watching as an occasional steam car sped in the distance, after which leaving panicking horses and fleeing pedestrians. She shuddered. I hope none of those machines come close to here. She somberly thought as she safely secured the spectacles and ring back into her pocket.

Tracey quickened her pace to catch up to Mittie. “Mittie?” she inquired as she finally fell into step with Mittie’s brisk walk. Mittie turned to her, her eyes beaming with excitement.

“Can ya believe it?” she squealed. “We’re going to meet Jon Starr! The Jon Starr!”

Tracey hesitated, her hand touching the embroidered handkerchief. Mittie glanced at the pocket before fixing her inquisitive gaze back to Tracey. Dare she say anything about the handkerchief? After all, she thought, this is my only solid lead, and I don’t know anyone very well… “No, nevermind,” she finally said. Mittie frowned. “Actually, yes!” Tracey quickly corrected. “Do you think that he will have us for tea? I know he may be busy, but I am rather curious about this man.”

“Oh!” Mittie said, her eyes brightening again. “If ya were embarrassed ta say so, don’t be! l don’t mind talkin’ ’bout ’im. I hope he does! I can only imagine Reggie’s reaction when I tell ’im I met Jon Starr ’himself!”

“Oh, yes, I don’t think I told ya ‘bout Reggie, huh? Suppose we’ve only met each other a couple a’ hours ago anyways.” Mittie said, blinking. “Reggie—or Reginald—is my beau. I had stopped here in Mondon to pick up some supplies before I sail off to meet ‘im on the southern coast. Never thought I’d stop here longer than a half-day or so, but he’d understand. He’s a big fan of Jon too, ya know; he was the one who got me into his acting in th’ first place.”

“M-me?” she squeaked. “I-I’ve never thought much about dating—.”

“Ah, no worries, I see I took ya off guard there,” Mittie amiably said with a bump to Tracey’s shoulder. “Looks like we’ve reached Mr. Starr’s home!” she said, looking up and pointing to a prominent apartment ahead.

It wasn’t the towering windows, nor grand staircase that made the apartment so prominent. Nor was it the fact that it was a full story taller than the surrounding buildings. Nor was it its trees that flanked the front nor ivy that climbed the facade. And not even the fact that this starkly baby blue home stood on its own large property, with the surrounding beige apartments looking cramped and dark in comparison. No, for it was what sat glittering in its driveway, sitting dormant as if it were waiting to roar to life. “A steam car!” Tracey gasped. 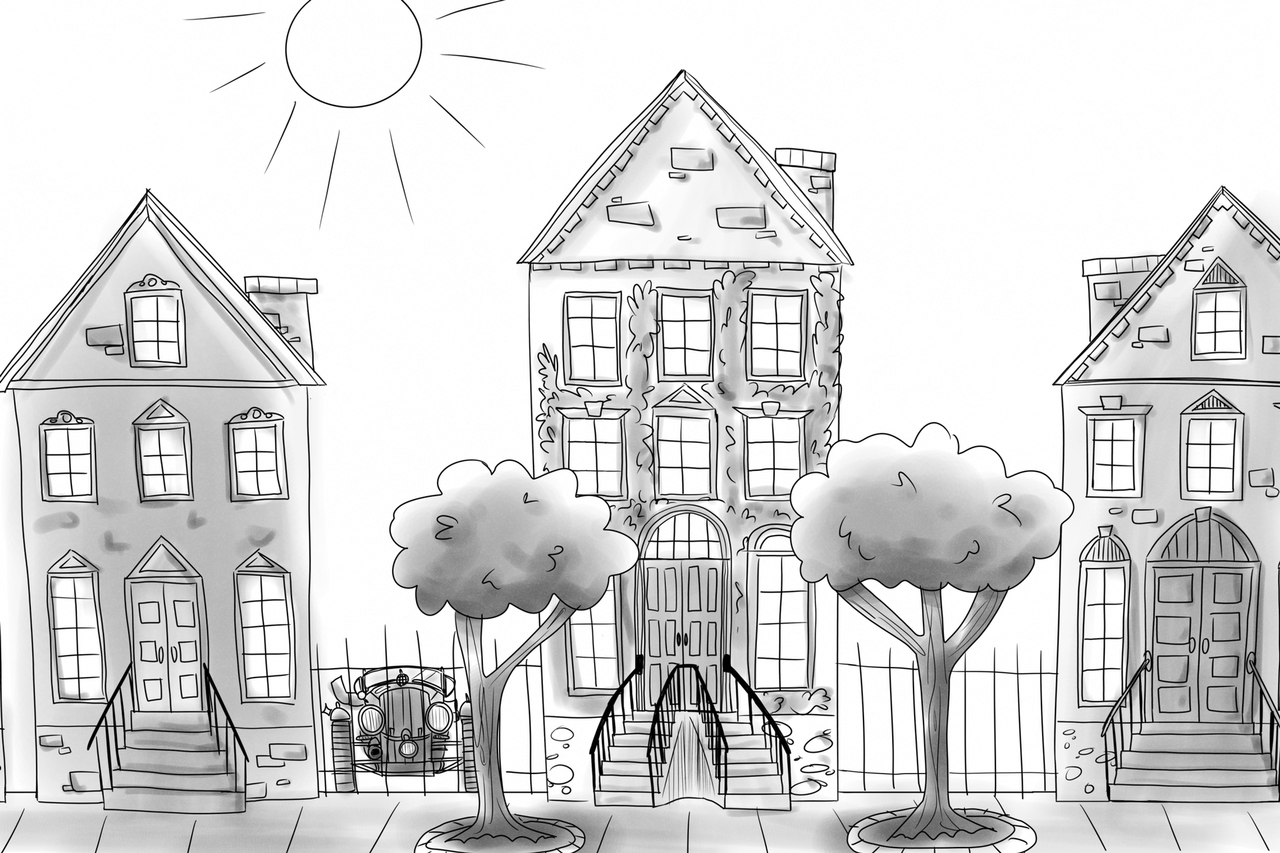 Yes, dear reader, as this invention was only owned by the rich (as Charlie earlier stated), it was of no surprise that a famous actor like Jon Starr would be an owner of such a contraption. Tracey shuddered. “What? You don’t like ’em?” Mittie said with a surprised glance. “I thought they looked pretty snappy if ya asked me.”

“No, no I’m not fond of steam cars. The less I spend around them, the better,” Tracey stiffly replied, carefully making sure her gaze didn’t fall on the car again. “I had a…rather bad run-in with one when I was younger.”

“Ah, I see,” Mittie said with a sympathetic nod. “You don’ have ta talk about it if you’re not comf’table with it.”

“Thank you,” Tracey said with a small smile.

“Ladies?” Mr. Berkley’s voice sliced through the air. “I would appreciate it if you kept pace. Now,” he continued as they hurried forward, “Mr. Starr is a rather peculiar person. As I was telling these two over here—I don’t believe I’ve gotten your names?”

“Yes, as I was telling Harriet and Charlie, he does not appreciate fanfare.” He said these words with a piercing stare to Mittie. “Your name, please?” he said.

“Mittie—er, Mitilde?” Mittie stammered, taken off guard by the sudden attention. “But I prefer Mittie, if ya may.”

“Thank you,” he responded. “Mittie—I’ll call you as you prefer—I noticed you seem to be an enthusiast of Mr. Starr, no?”

“Hm. Mr. Starr does not like fanfare in the least bit. So, no cheers, no bouncing in excitement, and by all means, do not ask for an autograph.”

“Why not an autograph? What happens when you ask for one?” Mittie asked.

Mr. Berkley simply raised an eyebrow. “Let’s just say, that it would be best if you do not know.”

“So, no fanfare. Understood?”

“Now, I don’t believe I’ve introduced myself. I am Mr. Bentam Berkley, a records keeper from the High Constable office.”

“Wow, a real constable!” Charlie said, his eyes lighting up.

“No, a records keeper,” Mr. Berkley coolly corrected. “For the sake of visiting Mr. Starr,” he continued, “You may call me Bentam. Now, now that we’ve all met each other—.”

“I’d hardly call this meeting each other…,” Tracey said with a frown. Bentam squinted at Tracey before continuing.

“Now that we’ve met each other, we can now proceed to Mr. Starr’s home.”

“What do we call Mr. Starr, sir?” Harriet quietly piped.

“Mr. Starr unless otherwise told,” Bentam said as he approached the stairway. Besides the massive double doors was a gear handle far grander than even Mrs. Pinot’s own. Bentam turned the ornate door gear’s handle, starting off its chain of gears. They soon began to produce little puffs of steam and ended in a melodious ‘ting-ting’.

“Wow, impressive doorbell!” Mittie said, her eyes full of curiosity. “I wonda why I haven’t seen these kinda ones sooner!”

“They’re very common here in Mondon,” Bentam replied. “I’m not certain if you’ll find steambells like these outside of the city.”

“No,” Mittie said with a shake of her head. “I’ve been all over the country, and this must be the first place in Dnalgne I’ve seen these!”

Bentam nodded. “Marvelous contraptions, those things. In fact, the inventor of it is an acquaintance of mine.”

Bentam started as if to speak again when the door opened.

There stood a tall and slim man, his dark hair neatly parted and combed flat against his head. He wore a neat beard and sported a sharp outfit, everything from his bow tie to shoes pristine and orderly. 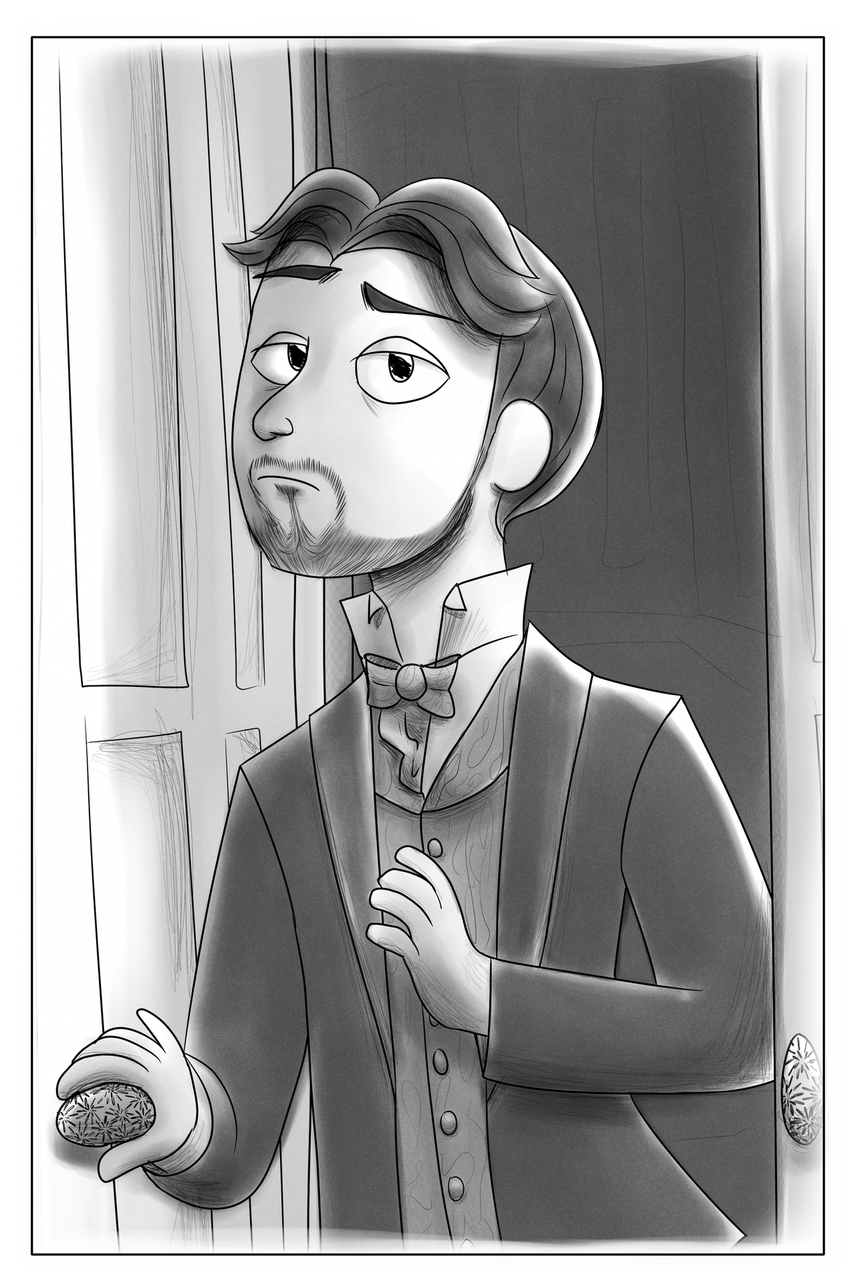 “Gears! I can see my reflection in those shoes!” Charlie whispered to Harriet.

“Wouldn’t expect anything less from a butler!” Harriet whispered back.

The butler’s thick eyebrows furrowed as his mouth formed into a perplexed frown. “May I be of assistance to you?” he said as he looked over the dysfunctional group.

“Yes,” Bentam said, gesturing to the group. “They’re with me on business. You may remember me, Mr. Bentam Berkley? I’ve been here several times to help Mr. Starr with tracing back false fliers for his performances?”

The butler nodded. “Please, enter,” he said, stepping away from the door. “You may already know, Mr. Berkley,” he said as they shuffled into the entry, “But for the new visitors: Mr. Starr does not like…dirt or dust.”

“Please take these complimentary house slippers. You may take them with you when you leave,” he continued as he turned to a console by the entryway and pulled out a box of slippers.

Tracey turned her attention to the room about her. It was surprisingly darker than the exterior’s light paint had suggested. The room seemed to stretch off into an indiscernible point, likely ending at some stairs from what Tracey could see. The tall ceilings reached up towards an enormous chandelier. Below it, the walls were covered in deep burgundy, offset by dark brown wainscoting closer to the ground level. The floors were a dizzying checkered pattern. Adding to its disconcerting patterns, it was so polished that she could see her own reflection in it. “I’ll say…,” Tracey said in impressed awe.

“As I see you have all changed, please follow me,” the butler said as he rearranged everyone’s shoes into a neat line by the door. He turned and whisked away into an adjoining room.

This room resembled the outside of the apartment much more than the foyer. The walls matched the baby blue exterior, and the wainscoting—similar style to the one of the foyer—was painted to a cheerful white. Everyone cautiously perched onto an assortment of cobalt chairs that sat about the room. “Mr. Starr will be with you momentarily,” the butler said, whisking out of the room.

Everyone, except for Bentam (who was busily sorting through stacks of paper), looked about at one another. Harriet sat in a chaise near a window, looking as if she were trying her best to be at ease. Charlie sat nearby her on a bench, sullenly looking out of the window. “I thought we were gonna eat…” he sighed.

“There was food at Mrs. Pinot’s,” Harriet replied.

Mittie, who took a seat nearby to Tracey, leaned over. “Spiffy place, eh?” she said with a smile.

“Yes,” Tracey agreed. “It’s quite different from what I expected to see in here based on the foyer.”

“It was kinda’ dark, don’t you think? I thought it reminded me a bit of a funhouse!”

“You’ve neva’ been to a funhouse?” Mittie gasped. “The steamchairs and gear-mirrors?”

“Ooh, or those spinny walkways!” Charlie piped in, turning his attention to them. “Harrie an’ I been to one a couple a’ years back, blazing fun!”

Mittie nodded enthusiastically. “My fam’ly went every summa’ when I was a girl. Don’t see ’em as much nowadays with all the travel’ing, but you can bet we’d go to one the next time we’re together!”

“Harrie, can we go this year?” Charlie said with a small smile. Harriet frowned. “We can save up some extra spigots, take a few jobs here an’ there—.”

Bentam merely looked at them and resumed sorting through papers.

“After we find Mr. Porter, of course,” Mittie added, much to Tracey’s relief. “Don’t think I’ve forgotten! And you’re invited too, Bentam!”

“Funhouses have never been my sort of scene,” he replied, pausing to look up to Mittie. “I’ve been once…as a child. We never went back.”

“Oh, well, maybe ya haven’t been with the right group a’ people!” she cheerfully answered.

“Bentam! Fancy seeing you here!” a sudden voice sounded from the dark foyer. All eyes turned. There stood Jon Starr himself.