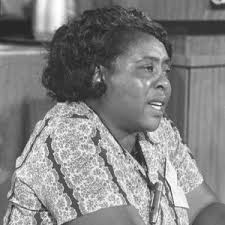 Fannie Lou Hamer was born October 6th, 1917 in Montgomery County, Mississippi. She was the youngest of 20 children, born to sharecropper parents. Her family was poor, and once she turned six, Fannie was out in the fields picking cotton with the rest of her siblings and parents. She began to receive an education when she was 12 years old.

In 1944, she married Perry Hamer and moved to live on a plantation. Since she was the only one who could read or write, she also doubled as the timekeeper (the person who made sure everyone did their jobs when they said they did them).

In 1961, Fannie received a hysterectomy without her consent by a white doctor. A hysterectomy is when doctors remove the uterus, and the female is unable to have children. She had originally been going to get a urine tumor removed. Things like this were completely normal for white people to do at the time, a way to decrease the Black population. Hamer was enraged. Angry, as she should have been.

In the summer of that same year, Fannie attended her first Student Non-Violent Coordinating Committee meeting, where they discussed the mistreatments of black people. Soon, she became an SNCC organizer and led 17 other people to register to vote at the Indianola courthouse in Mississippi. The group was harassed by the police on the way home, fined $100 because their bus was, “too yellow”. That same night, she was fired because she went out to go register.

In 1963, Lou Hamer finally gained her right to vote. She and several other back women were arrested for sitting in the “Whites-only” section of the bus station restaurant. While being detained, the women were brutally beaten by the police. Fannie was left with lifelong injuries such as; a blood clot behind her right eye, a permanent limp, and kidney damage.

1964 became the year that Fannie Lou Hamer was nationally known. She was the co-founder of the Mississippi Freedom Democratic Party, a group that challenged the Democrat’s treatment of black people during that time. They demanded to be seen as the official delegation. The President at the time, Lyndon Johnson held a televised press conference so that she wouldn’t get any air time, something that wasn’t allowed for black people at the time.

His efforts were in vain because her speech (told descriptively of racist actions towards her and others) became televised later on in the year. In 1968, her hard work paid off and Hamer became the first person to sit on an integrated (desegregated) delegation. In that same year, Fannie also launched Freedom Summer, an organization made of both black people and white to get rid of racism and black suppression in the voting process.

In 1968, she began a “pig bank”, something that provided free pigs for Black farmers to breed, raise, and slaughter. With the help of many donors, Fannie was able to buy about 640 of land, where there were houses for low-income black people (some of these houses are still up today). In that time period, she also created a coop store, boutique, and sewing busisness.

Fannie Lou Hamer lost her life to breast cancer in 1977.