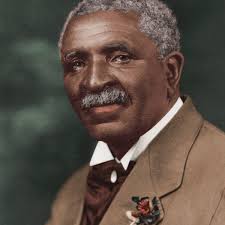 Many people confuse this great African-American scientist with the United States’ first president. He did nothing related to wars or governing a country but he excelled in all things science. He

George Washington Carver was most likely born sometime near 1864- during the time of the Civil War. Because of this the exact month and day of his birth are unknown. His parents were Mary and Giles, slaves to Moses and Sue Carver. Not too soon after that, a horrible tragedy struck. A log incident killed his father. In 1865, he, his mother, and younger sister were kidnapped by bushwhackers- people who stole slaves and sold them to the South. Moses was able to rescue George, but he never saw his sister and mother after that.

Once the Civil War ended, the Carvers decided to keep George and raise him alongside their daughter. Moses, who was afraid of George raping his young daughter, had George castrated when the boy was only eleven years old. Because of this, George grew up with an extremely high-pitched voice (most likely because his testosterone never had a chance to develop) and a stutter that eventually faded away. While growing up, George spent a lot of time outdoors which was the start of his love of nature and science. During his childhood, he was dubbed the “Plant Doctor” because he would help his neighbors with problems with their plants.

In 1877, George moved to a nearby town to live with a childless African-American family named the Watkins. He learned as much as he could, and sometime later, he moved again. He worked as a cook at the school in Fort Scott. Unfortunately, in 1879 he witnessed the lynching of another African-American student and booked it back home as fast he could. He attended a number of other schools during the remainder of his childhood.

He moved to Iowa to open a laundry business (doubling as a chef as well) with the money had from homesteading. In 1890 people began to encourage him to enroll at Simpson College, which had previously admitted another African-American student. He studied mostly art (occasionally dabbling into music and piano) there, but once his teacher saw that the main focal point of his pieces revolved around plants, urged him to go for agricultural science instead. His teacher also encouraged him to transfer to Iowa State University, where he eventually earned his Bachelor’s in Agriculture. He became the first African-American to graduate from Iowa State University.

Not too soon after that, Booker T. Washington of Tuskeegee Institue offered him a job as a faculty member. Promised a hefty paycheck and a room to himself, Carver accepted. He researched crop rotation and alternate cash crops to the normally produced cotton. He taught farmers about his findings, which he called Jessops Wagon. He went on to become a prominent figure in the science world. In fact, Theodore Roosevelt admired and often asked for his advice on agricultural matters concerning the United States as a whole.

George Washington Carver was also recognized abroad for his efforts. In 1916, he was made a member of the British Royal Society of Arts- rarely achieved by Americans. He died in 1943 with a National Park created in his honor. He was the first African-American that this was done for.