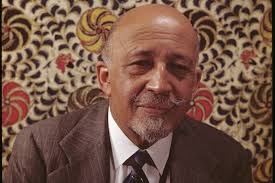 William Edward Burghardt du Bois (dubbed just W.E.B. du Bois) was born on February 23th, 1868. He grew up in a mostly white town, known to its inhabitants as Great Barrington in Massachusetts. He freely attended school with his white peers and was encouraged by his white teachers.

In 1885, he accepted a scholarship for Fisk University in Nashville. It was there that he first encountered Jim Crow laws- unjust laws placed to limit the African-American race. He began to analyze and come to terms with and troubles of racism in America. After earning his bachelor’s degree at Fisk University, he went on to get further education at Harvard- paying his way with summer job money, scholarships, and loans from his friends. In 1895, W.E.B. was the first African-American to graduate from Harvard with his Ph.D. He also was selected to become a student in Berlin, Germany.

In 1896, du Bois was invited by the University of Pennslyvania to conduct a study. After interviewing an estimation of 2,500 households, du Bois was able to create his masterpiece: The Philadelphia Negro (1899). The study was both empirical (based on observed phenomena) and hortatory (meant to exhort). Also in 1896, paired his speech “The Negro Problem” which explained the race problem in America and how it should be fixed (from a political standpoint). “The Conservation of Races” explained race as a theory and its historical sociology. It spoke of the importance of defending black culture and identity.

During July and August of 1897, du Bois did another study. The Negroes of Farmville, Virginia: A Social Study, and coupled with it was the published article “The Strivings of Negro People”. In 1903, there was a slightly edited version of it titled The Souls of Black Folk. After that, du Bois went on to teach two long tenures at Atlanta University. He taught sociology and empirical studies. While teaching he wrote another book, John Brown (1909). The book was an interpretation of the life of a martyr and abolitionist. He also edited for two short magazines, Moon and Horizon.

W.E.B. emerged as the most famous opposed of Booker T. Washington. In fact, W.E.B. preferred not to interact with the man and escaped many offerings of working at the Tuskegee Institution. Washington seemed to give up the chase for a while when du Bois taught summer school there in 1903. A year later, du Bois joined William Monroe Trotter and others to form the Niagra Movement, an organization that fought for full civil and political rights for African-Americans.