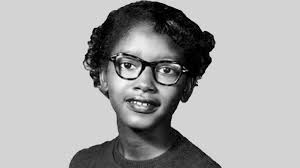 Before Rosa Parks, there was Claudette Colvin. She was 15, and one of the first people to refuse to give up her seat to a white person on the bus- nine before Rosa Parks completed the feat.

The date was March 2nd, 1955 and Claudette was taking the bus home from school when the bus driver ordered that she get up from her seat. She had been learning about black history in school, of all the injustices her people had to face due to the Jim Crow Laws. They couldn’t eat at the counters, they couldn’t try on clothes or shoes. Filled with the pride of her ancestors, Claudette proudly stood her ground and told them no.

She told them that she paid the fee and it was her constitutional right. Two police officers threw her schoolbooks off her lap, and arrested her on the spot. They locked her in a jail cell- and then the panic finally settled in. There were lynchings and burnings for people who did this sort of thing. Her friends told her it was her squeaky voice and tiny stature that protected her from getting beaten or even raped.

Colvin was also one of the four women present in the Browder v Gayle case- the case that finally overturned the bus segregation in Montgomery and Alabama. She had made history, and she was only in high school.

People often wonder why everyone knows so much about Rosa Parks, but not those who came before her. Usually, when something like this happens, the women are fined, and thats the end of it. Her family moved to New York not too soon after- and segregation wasn’t really the focal point of people of her age range there. Everyone talked about Malcolm X, black power, and black-owned business. Claudette had no one to really share her story with.

There is also the argument that NAACP and other organizations like it thought Rosa Parks better fit the bill. She was an adult and therefore more trustworthy and reliable. Besides, Claudette had soon become pregnant and people of her community began to shun her. Rosa Parks also looked the appropriate way for someone struggling in the middle class. She was secretary of the NAACP and had a certain flair about her.

Claudette Colvin is still alive today, retired from her nursing job, and back home in Alabama.