Kishyie would love your feedback! Got a few minutes to write a review?
Write a Review

Prologue: Sweet Was Not Always your Favorite Flavor

Love was an unpredictable bitch in real life. No one knew when it’ll strike or when it’ll leave a heart broken and bleeding. The irony was, when one told a story of love, they could easily predict what was about to happen next. Young doves have the appreciation to find cliché outcomes that triggered their lust.

It was ever the earth’s endemic disease.

Love often hurt people. It made them delirious on happiness. It brought the torrential fountain of tears on tainted souls during blue moments. It made egotistical hearts brag. It can even drag them further down when they know they’re falling. But what if there was no one to break the fall? That would totally hurt. Totally.

They can spew advices to heal a scorned heart, but when they were asked to do it, they couldn’t. Easier said than done. It was always that way—yesterday, today, tomorrow, the days and spaces in between—it never really chose when. Time waited for no one. Those two hearts will always chase time.

When trying to be ‘sweet’ was not always your favorite flavor, landing true love would be far from your achievements list. So you can either suck it up for being less charismatic, less sociable, bitchy, flirt, fucker, or forget you were made for someone when there’s actually no one meant for you. Not a single soul. It’s a cruel world after all.

Love, after all, was the intense beating of a lifetime.

He wasn’t particularly gentle when he decided to deflower her this very instant either. She cried out when he pulled her delicate petals off atop the traditional mahogany drafting table. He loves me, he loves me not. Does he?

He pounded himself over and over inside her. Instantly at a fast pace. She moaned, whispered his name, and cried whenever his thrusts went so damn deep and hard. Even the table made thudding sounds at their movement.

His dress shirt was unbuttoned, lingering around his shoulders, and his pants pooled around his ankles. His necktie was somewhere on the floor. Her blouse was stripped open and bra was askew, exposing her taut breasts. And holy shit, those were the size he wanted rubbing in the palm of his hands. Pretty much like the amazons they illustrated in fantasy games. Her skirt was drawn up and panties were thrown somewhere in the office.

They felt each other’s skin rubbing against each other’s vulnerability while he eased in and out, in and out. Her legs were wrapped tightly around his waist. Her hands supported their weight at the edge of the table to accommodate him. He continued to lead her into a blissful dance. She breathed his name over and over...and over.

Who knew fucking felt this good?

He told her not to be so loud. Knowing she was a virgin until the moment he took her, he couldn’t fathom the pain it must have dealt on her part. She screamed anyway. A pleasurable cry that clouded her senses of everything else but him.

He cared less about her moans anyway. Her cries can’t penetrate through the acoustic treatment installed throughout their firm. He made sure of that. Thank goodness the walls bounding his office weren’t the typical frosted glass. That would definitely give them less privacy.

Slowly, she was filled with nothing but pleasure as the pain subsided. He wasn’t exactly gentle with his pacing since they begun. If he wanted it that way, she couldn’t find her voice to tell him to take it easy. She just wanted him to fill her with each stroke. Their breathing grew ragged. Her moans never seized. Yeah, hard was good. It felt so damn good moving in and out of her from down there.

And whoops! Had she warned viewers that this was not how a story should have started? But for her life, it did. Him inside her. Much like a What If episode on Youtube saying, ‘What If There Were No Orgasms?’ Now that’s a topic for another discussion.

“Oh, Genon...oh my god.” She moaned and arched her back when he kissed the side of her neck. “Fuck me harder.”

Someone else was already rolling their eyes. That much, she could tell.

Genon breathed a laugh against her lips at her request. Surely, it can’t go harder than that already. He can only go faster, which he did. He took pleasure in hearing her plead while calling his name against the table’s thudding.

For some reason, he couldn’t comprehend how his lack of self-esteem was taken away by this woman. He wasn’t really one to mingle around the opposite sex that much. Not unless it involved his friends. Of all people, he allowed her to penetrate through that barrier. It sounded so fucking cliché making him want to rip off this damn page right now. For fuck′s sake, why was this happening to him?

Maybe this was the thing he needed. His friends gave him all the unreasonable thoughts that he couldn’t do it. Couldn’t be with a woman. Yet, here he was, deep inside of one. He was filling them both with pleasure.

He was using protection. It was an alternative one because he didn’t have a stupid condom stashed away like some man-whores who were masters in the art of ‘Hit and Run.’

She said he could use anything as long as he had something on. Request granted, no questions asked. She didn’t protest to the idea of it anyway. He guessed it was because she wanted to fill and feel him inside her desperately.

She never knew that their dance could be the most intense pleasure one could ever feel. Now she understood why. This was why AIDS was a prevalent disease among unconventional love birds who didn’t really know the subjective definition of true love in the first place. They know sex, but they don’t know how to make love. They merely like the idea of experiencing it, because let’s face it, sex made people feel good, maybe you can even ask that to E.L. James? Maybe make Christian Grey kinky fuck a dozen women at the same time until he doesn’t have enough sperm to release, possibly kill himself of intercourse exhaustion?

Death by Sex. Wouldn’t that be an embarrassing thing to write on a Death Certificate, especially for the relatives involved?

She wanted to recall how they ended up the way they are now. She no longer lingered on that when he was filling her up to the brim when he moved faster. She was afraid she couldn’t contain it any longer as she was nearing her climax.

“Genon! Shit!” She screamed and jerked her back off the table until her breasts were flat against his chest. A whole new world? Can you feel the love tonight? Love will find a way? You′ll be in my heart? Help December let a New Year begin?

That was it for her first launch of a Broadway concerto conducted inside her. If there was an encore, she’d definitely request one more. Somehow, she was happy that he was her first. So happy that tears welled in her eyes.

He continued to move because when was a time when men came first? Unless he couldn’t really contain it or the woman wasn’t really willing and was forced into.

He went deeper still, looking at her features while he did so. She had short purple gradient hair as a color, a beautiful pixie cut almost resembling how Storm from X-Men looked like. Or maybe it was just another Halle Berry look from Die Another Day. Either way, he knew she looked luscious. Her eyes reminded him of orange marmalade.

She wanted to register his features just the same when their eyes met. She didn’t know how to describe him, but she knew he was a gem. A rare one. If he were a birthstone, she’d label him a Topaz.

He had big and alluring yellow eyes, almost resembling a cat. He wasn’t buff but was medium built. His hair was long and flaxen. She untied it moments ago and felt silk in her hands. She thought his features were almost akin to the Woodland Elves in The Lord of The Rings and The Hobbit. Heck, he might even be Lee Pace’s or Orlando Bloom’s long lost relative. 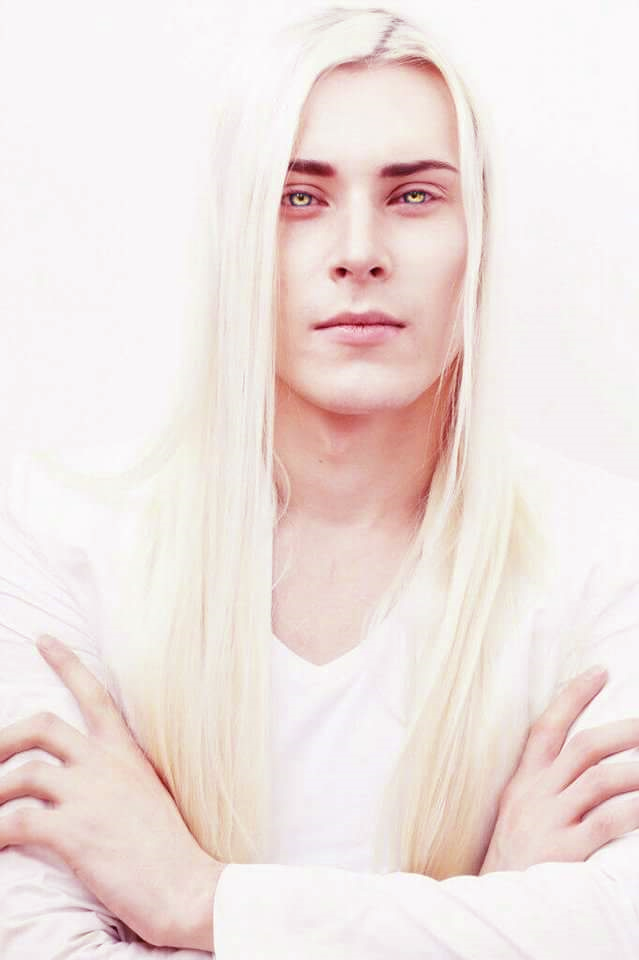 Take me and the hobbits to Isengard with you. She knew most men had beautiful long hair. She found it unfair for her part. She kept hers short because her hair was natural and frizzy. It annoyed her to fix it every time.

Genon could almost feel it. He could feel himself. How disgusting did that sound? With one last thrust, he found his release. But it felt weird as he was missing something somehow.

Their breathes were unstable at the moment. She smiled and cupped his cheek with a hand. She saw the slightest color on his cheeks and found it adorable somehow. Something caught her when she reached his face. He stiffened slightly at her touch, she wondered why.

“What is it?” She asked in a concerned and soft voice.

He stared at her for a full minute. She knew he was still inside her and decided to stay still. Would it hurt her if he asked? What would she feel about it? He wasn’t really around women that much to know how they’d feel. He couldn’t comprehend how feelings often get to stand between progress and life.

Well, nothing was going to happen if he continued to stifle his mouth. So his best option was to ask and get it over with.

Mamta: Hooked to story liked it

Cassidy: Honestly I loved this book, just one grammar error here and there but other than that I enjoyed reading this book.

Read Now
Knock On Wood (Riders of Tyr #6) by AdelinaJaden

suzannedharvey11: Awesome story read all of them so far. Characters are so believable, can't put these stories down. Keep up the good work 😎😍

Read Now
Beauty Is The Beast by Queen Vega

Antanina: Loved it has a very exciting twist

Read Now
Tempted By My Boss II by Taniashava

Cherise Hill Masry: It's a good story, i liked it

Jfidela09: Excuse me but can I use your first 3 chapters of this book and the rest I can just guess what would have happened next. If I can't it's fine I was just wondering because I can't find it on the link you gave us.

Brittany Bergantzel: I love it just love it. it keeps getting better and better keep it up can't wait for the update

Read Now
Because I Kissed a Vampire! (Book 1) by Presley's Angel

Marissa: Awwwweeee loved it and the sorry was cute

robinson13115: Loved it. Love how they all care so much for each other.

Satya Lakshmi: It's really nice and interesting please update soon eagerly waiting for your next update