T. M. Luna would love your feedback! Got a few minutes to write a review?
Write a Review

How long have I seen these same walls, just how many days have I stayed trapped in this room? It’s as if I’m a flower, caged inside a glass unable to bloom and breathe freely. Why am I still here, what’s the point in keeping me locked away? As I lay in my bed, the only thing that’s been keeping me sane was the window that would let me see the outside world. But whenever I would replay the words Elijah had told me, I find myself having a mental breakdown. It’s still too much for me to bear, but the only things that were keeping me strong were my family and the people I loved...

I quietly said while gripping the bedsheets, with every minute that passes my nerves just grow anxious. That is until I hear the doorknob being unlocked! Quickly getting off the bed, I stood in the very corner of the room. My heart always seems to go through a panic attack when this happens! I’m always paranoid and afraid that it’s probably him. Ever since I found out that he was the King of this world, it’s only made me more frightened. But I’ve grown to loathe and despise him for what he has done...

“Good evening, my lady,” Carla spoke out as she entered the room.

The built-up anxiety within me was slowly going away when I realized that it was just Carla, I’ve grown a bit used to her presence since she would always come and bring me food every day. She would also draw my bath and hand me a new set of clothes... even if they are just underwear. At least I’m not completely naked, I just wish she would talk to me more other than just saying her greetings and her goodbyes. I really need to talk to someone...anyone, enough for me to stay sane. I don’t want my sorrows to consume me entirely...

“Carla, please...I can’t stay in this room any longer. It’s complete torture here, being locked for so long. I need to go home, I’m sure my family is worried sick! I have to leave, please... I beg you, let me leave.”

I pleaded in desperation...

“You will no longer be in this room,” Carla responded as she handed me a black robe.

Hearing her words, was like having my prayers be answered! Quickly grabbing the robe, I wrapped it around my body in relief. I’m so happy I no longer have to stay within these four walls any longer. But if I’m not gonna stay here anymore, where is Carla taking me then? Am I finally going home, will I be able to see Ren now?

“Before I escort you through the castle, the King has ordered me to have you put these on,” she said as she placed a pair of black high heels next to my feet.

The shoes weren’t the issue I was having in wearing, it was the metal chain that was attached to it that made me shocked! What the fuck is this shit?! Does he think I’m some kind of slave?!

“I’m not wearing these stupid things!”

I voiced out in anger as I kicked the heels away from me! I will not degrade myself in putting these chains on, Eli has lost his fucking mind if he thinks he has control over me!

“Behave little one, that’s no way for a young lady to act...”

Hearing an unfamiliar voice, my eyes then locked gazed with a man leaning by the door as I turned myself around! He had short white hair and his eyes were as red as the petals of red roses. His skin looked smooth to the touch and he was very tall!

I hesitantly asked as I got behind Carla in fright, I knew Carla wasn’t human either but she’s been the only one who’s treated me nice so far. Though I’m still surprised that the finger she bit off was now attached to her hand again. Regardless of her actions, she is the only one I can trust right now. And after seeing what Eli can become, I have to keep my guard up with anyone I come across!

“There’s nothing for you to fear, I won’t eat you if that’s what you’re thinking. I’m just here to give Carla a hand if she needs it...” Said the man as he began to take a few steps inside the room.

“Your services will not be needed, the king specifically gave me the orders to have me bring her to the dungeon floors. I do not require any help from anyone or you, Lord Crow.”

Carla explained as she went to pick up the chained heels that I had kicked away. Though I was still focused on the man looking at me so intently, his name is Crow? What an odd name to have, why is named after a bird? But who am I to speak when my name is literally named after a rock in space. Letting out a sigh, I continued to stand there until I realized what Carla said earlier!

I asked in concern as I took a few steps back from the both of them...

“My lady, please don’t make your king wait any longer than you have already. We must hurry, put your shoes on and come with me.”

Carla responded as she laid the shoes next to my feet in a rush! This was ridiculous, why should I put these on as if I’m some kind of prisoner! Also, what are the reasons for me having to go down into the dungeons? Is Eli upset with me, did I do something wrong?! My mind was running back and forth until I didn’t know what to think anymore...

“This one is a little more feisty than the others I’ve come across. Most humans just shut their mouths and do what the fuck they’re told. But this one...I think I’m gonna enjoy having fun with this one.”

Crow said with hunger in his eyes, I’ve never in my life seen anyone with bright red eyes like him! It was honestly frightening and it made it even more terrifying with what he just said. I wonder if he can turn into a monster just like Elijah?

“Don’t let the King hear you say that or you’ll be the next one to get their head torn off,” Carla warned him as she came to her knees in front of me!

Watching her place my feet into the set of heels, I felt so confused and afraid of what was to come. The way that Crow was looking at me wasn’t helping either, especially with how his eyes wandered up and down my body frame...

Carla politely said once she finished setting the shoes on me, taking my hand she made me follow her out the room. Though I couldn’t help but keep my head down as I felt Crow’s eyes staring directly at me...he’s so strange. 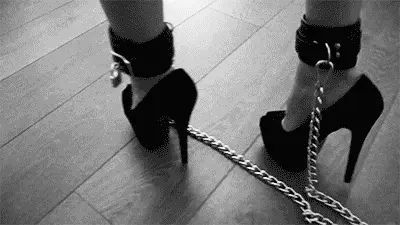 “Lord Crow, the second son and third in line to the throne. It’s best to stay clear from him, especially since he made a new contract with his demon not too long ago.”

Carla strictly explained as we made our way down the hall, I became slightly curious about what she was talking about. Paying little attention to my surroundings, all I could do was just keep quiet and listen to what Carla had to tell me. However, the more we talked about what was going on and where I was at. It made me very sick to my stomach that I was stuck in a castle full of demons that could kill easily kill me...

This all seems like some ugly twisted dream that I was having and the problem was that I wasn’t waking up! Why did this have to happen to me!? When I was little, I would sometimes hear scary stories when I would go to church, about how demons would kill or even torture humans that have committed sins. But I would have never thought in a million years that I would be here with these types of creatures, I just hope that I don’t see any of my loved ones here?! My heart still aches in pain from what happened to my pregnancy. but I can’t let anyone else that I love get hurt...

Deep in my thoughts and self worry, I started to hear a faint melody being played the more we walked. It sounded beautiful and calming, but there was something sad about it as well. But as we got closer to the sound, it became very evident that the piano was. It helped me feel slightly relaxed, but I know that I was far beyond being okay. Fear already has me by the throat and I know that I can’t run away without being killed by one of these monsters...

“Watch your step, my lady. The steps get very steep the farther we head down,” she said with caution as she unlocked a gated metal door.

I almost felt like passing out as I stood there unable to move, though I’m sure Carla noticed how much I was shaking since she grabbed hold of my hand. I guess that was her way of comforting me and as much as I appreciate it, it wasn’t helping me at all. But I could see it in her eyes that she didn’t want me to worry, but it’s impossible not to be when I knew who I might be seeing. No matter what I say, Eli won’t take no for an answer. Closing my eyes, I took a deep breath before taking one step at a time...

The number of stairs heading down wasn’t much since we came across a long dark hallway. The only source of light that could be brought down here was the many candles attached to the walls. And even then, it was still hard to see where I was going. I would be lying if I said I wasn’t horrified, my body couldn’t stop shaking. I was hoping that everything was just a sick twisted dream that I was in, and I wanted to wake up from it. But I don’t think Eli will ever let me have a peaceful life after this, I’ve already lost something so important to me. So what more can Eli do to damage me, what can he possibly want?! I have nothing left he can take away...or at least that’s what I thought as I entered deeper into the darkness.