Wandered Writer would love your feedback! Got a few minutes to write a review?
Write a Review

The Leap of faith

I stood in front of Roger’s mansion door. When help opened the door, her eyes widened and jaws unhinged. Needless to say, they knew who I was. Their baffled expressions might be because even though engaged, this was the first time I was stepping into Roger’s place.

Placing a hand on my lower back, Roger gestured me inside. I followed the path where his hand directed. His lowered voice dictated something to the help. I was spellbound by the length and width of the place to hear him. Till today, I thought Oswald mansion was big, but I was wrong. This was bigger, better.

Unlike our place, it didn’t have huge chandeliers hanging overhead, always having me worried for a day when a quake might bring it down. Roger’s place was minimalistic. It was painted in cream and the beige and beige colored furniture matched the surroundings. Dark mahogany tables with a transparent glass vase filled with white lilies provided the contrast to the otherwise lighter surroundings.

I walked as directed. The pretense to be a loving, understanding fiancé was portrayed well. I would end this play only if the allegations stated by Brandon were true. ‘Innocent until proven guilty’ revolved inside my mind.

Roger opened the door at the far end of the hallway. He stood straight, holding it open for me to walk in. I witnessed his surprise when I supported him against Brandon’s allegations. He spoke nothing about it on our way.

Standing inside his room, I saw the reflection of his personality.

Nearly arranged work table at the far end near the window, another entrance to his bedroom and a place to meet people. All were in black and white. There was no other color. Clearing his throat, Roger broke the silence.

“I will understand if you don’t want to continue this contract after what Brandon told you.”

I turned to watch his expression. Was he guilty? There was no remorse on his face. “Did you do it?” As straightforward as I could be, this question begged to be asked.

He placed his coat on the back of his study chair and walked back to me. Lifting my hand in his, he ran the pad of his thumb over my knuckles. We were at another staring contest but this time, something changed. I wasn’t scared to look into his eyes. I wasn’t intimidated. Ready to confront, all my inhibition melted away.

His hoarse voice asked, “What do you think, Arin?”

As much as I liked playing, the moment begged for a straight answer. “Tell me. I don’t want to guess.”

Coiling his arm around my waist, he pulled me closer. His warm breath caressed my face. I inhaled deep and exhaled slow. No time to be nervous. No time to think of him as someone who could induce cardiac arrest in me. It was time to get some answers. I chanted in my mind, ordering my brain not to shut down midway. We were glued together by his hand’s force from behind. Seeing no struggle from me, he scanned my face.

“I want you to guess, Babydoll.”

A man, who would be guilty wouldn’t play around. He would definitely not be calling me that, knowing how enraged I would be if his answer was a yes.

I replied with another doubt, “Why did Brandon say it then?” It seemed like Roger got the answer he was looking for. My counter-question was an affirmation of my belief in him.

Falling back on the couch, he narrated the whole incident about Stella’s betrayal and her false allegation. My insides burned in rage. If Stella was present anywhere close to me, she would have been punctured. Hell, she would be murdered by me. How dare that privileged piece of human garbage assumed it was fine to make up an allegation to ruin a man’s life. A rape charge against a man who once loved her.

Roger looked up at me. I was fuming, walking around the place. He patted the seat next to his. When I fell back the same way he did, the bouncing sensation eased my strained muscles. Roger’s silky voice did the rest.

I was quick to retort, “Have you?”

With genuine concern in his eyes, he looked back at me. Was he telling me he hasn’t? Was the damage irreparable? Will he never trust a woman again?

With a huff of air release, he nodded. I have known Roger far too long in person and over calls to understand he was lying. There was nothing I could do to ease the pain. Being there as his friend was the only way I saw fit.

Running a hand through his back, I turned him to face me. “I know it would take eons to get over things like this. I just wanted to let you know, if you ever want to talk about something, I am always available.”

With a single head bob, he stated his affirmative answer. When I pulled my hand back, he was quick to hold it in place, intertwined into his. “Why are you doing this?”

I had that answer ready, just in case. Since the day he knew about my identity and the debacle that ensued, I had a mirrored rehearsal of the question. The truth was only privy to me.

“Because I am a bloody good friend, silly. And friends always help one another.”

He slipped closer on the couch. His free hand pulled me closer to him. I tried to wriggle out of our clutched palm, he didn’t allow it.

“Babyyydoll..” There it was. The one word which cut through all my facade and forced me to tell the truth.

I resisted. One final attempt, to salvage the wreckage, to protect me. “I am telling the truth. What? You won’t do that for me if you were in my place?”

He didn’t answer. His eyes remained fixed on me and occasionally dropped down to watch my hand wriggle. He knew I was lying. The man was better at it than anyone over calls but he was the best to detect it in person. I pleaded with my eyes. There was no way out of it than the truth.

A rogue tear formed in my eye and dropped. My chest felt heavy, flooding my eyes into a hazy vision. This moment was what any girl would dream of. Confession.

The time when she would state her feelings, knowing it would be reciprocated. I knew it wouldn’t. Wanting to end the torture, I looked up at Roger. My hazy vision cleared when the brimming tears overran. Roger’s eyebrows bridged, his thumb wiped away the jet black stream. He showed me his hand for me to realize my mascara wasn’t waterproof. His last attempt to make me laugh.

“Why?” was a single word I uttered, asking him the reason.

He too responded the same way. “I need to know”

The locked up dam of feelings inside burst open upon hearing his words. There was no turning back, there would be no reciprocation, yet I took the plunge.

There it was. The spillage. Words were spoken. He knew everything. There wasn’t anything unsaid. Yet, the ache in my chest increased as my words floated and disappeared without a response.

Roger’s eyes scanned the carpet beneath his feet and the ceiling above but not me. He let go of my hand and I nursed a cramp.

Straightening, he turned to me. “Arin.. The thing is..”

I raised my hand to stop his justification. There was only a certain amount of pain my heart could bear. Whatever he wanted to say wasn’t ‘I love you too’ and it would only plunge further into my wounds.

“You don’t have to justify, please. I didn’t ask you to be in this with me. So it isn’t your fault either.” Heaving, I felt the pain radiating from my chest, spreading to all parts of my body. “My only request is, if you don’t feel what I said now, please.. please leave the room. I can’t face you for now.”

The truth was, I would never be able to face him ever. ‘Now’ made it sound better. It gave hope.

I steadied my gaze low on my feet. The door creaked open. It broke my heart into a million pieces. He wasn’t in the room, he left. The residual tears streamed, running down my face. I heaved for air and this time there was no one to pacify me.

Having taken a calculated risk in answering his question, I failed in my leap of faith. A little hope inside me which screamed, telling me to open up, now sat in silence bearing pain. Pulling a paper, I wrote till my vision became blurry.

I picked up my phone and against my better judgment, dialed up. I knew he wouldn’t break my heart. He wouldn’t ever betray me. He will always love me. When he picked up, I was quick to answer.

“Please meet me at the airport.” After his concerned question, I answered, “Please.. no questions. I want to get out of London for a while.”

Thank you, each and everyone, who read and commented on this book. I am humbled.

I hope you all check out my recently completed novel- 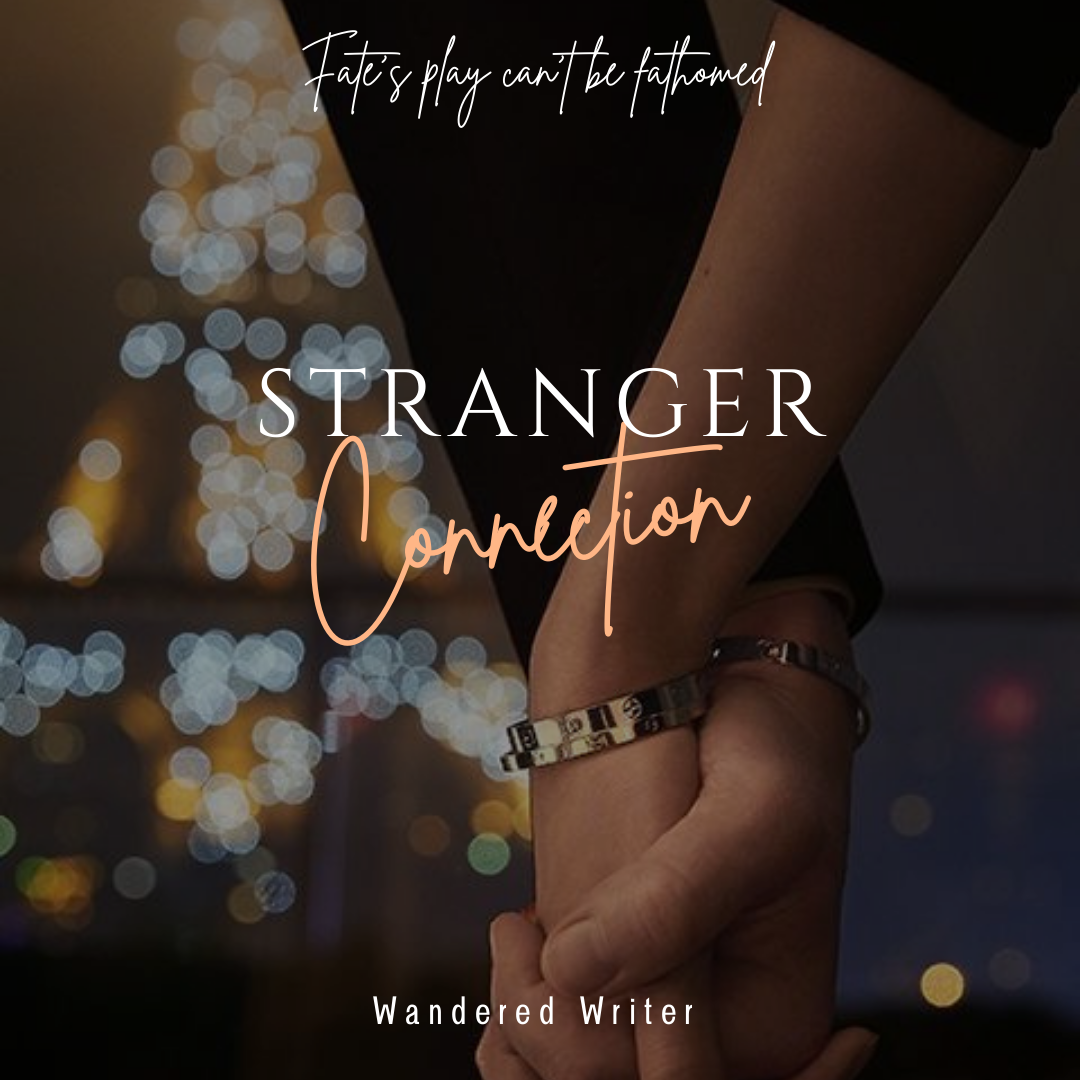