Wandered Writer would love your feedback! Got a few minutes to write a review?
Write a Review

What happened to me?

One minute I was talking to the guests and in another, I remember coiling my fist, punching Brandon.

God! How did this happen?

I remember when he waltzed in like the party was thrown in his honor. He never even bothered listening to Charles who asked him to leave. Brandon had come to create a scene and was successful in riling me up.

I turned around and with my hazed vision watched the crowd disappear. They moved back, miles away from me. I stood in the circle when the emergency came and rolled away that bleeding man. I don’t remember anything else, only the tingling sensation over my knuckles.

I only recalibrated my surroundings when Arin’s words hit me. Her soft tone brought me back into reality. I didn’t have a reply for her “What happened.”

The only words that escaped were my deadbeat father’s name.

Arin held my hand and moved me to a corner. Her icy cold hands held my face, making me focus on her. I was spinning out, unable to understand how and what happened.

“Roger,” she rattled me.

Slowly, her face emerged clearly from the haze that was before. As the smoke that veiled before my eyes lifted, | realized what may have happened.

“Brandon came. I...I don’t...remember.” I stuttered, unable to explain the takeover my brain had, upon seeing that man.

She held my bleeding knuckle, scanning it from every possible angle. The party was already over. Charles had to ask all our guests to move out.

Remorse rose in me, I realized the party was a disaster because I couldn’t control my anger. A part of me wanted to do it all over again, beat up Brandon for what he said to me but I wasn’t thinking straight to begin with.

Charles moved back to us after seeing off the guests. His face whispered concern. Of course, it would. How would a father feel, letting his daughter be with a man who beat his own father?

Arin turned to Charles. She moved him away from me, whispering.

The empty halls resonated with her voice.

“Did you see what happened?” she asked.

“No clue, kiddo. I was talking to some people and then Brandon entered. After asking him politely, he was unwilling to go so I moved on to call security. That’s when...”

Charles’ voice wavered as he relived the nightmare he witnessed. Arin nodded at him before moving back to my side. The help had already provided the first aid kid. A doctor was on the way too. Arin knelt before me, smiling. She cleaned my wound and checked my hand, top to bottom.

I felt a surge of devotion towards her which couldn’t be expressed through words. “I am sorry, Arin.”

“For what?” she questioned. Her eyes remained glued over the injured area, carefully wrapping a band-aid over it.

“For ruining this,” I said. She looked up with her eyes narrowing at me.

"He ruined it,” she pointed into the air with a stern voice. “Brandon did this. Not you.”

The doctor had arrived sooner than expected. He checked my injuries and prescribed painkillers before being escorted out by Charles.

“Do you remember what happened?” Arin’s crinkled forehead matched her scared voice. She was worrying for me.

“Not exactly, babydoll. I remember in flashes.”

Sighing she fell next to me. Tucking her head over my shoulder, she waited for the medicines before saying goodbye to Charles and driving us home.

A night that was supposed to be happy and joyous turned into a nightmare. I wasn’t willing to let anything compromise the day but the funny thing about man’s proposal and god’s disposal happened. I also didn’t consider a major factor; me.

It wasn’t an external element that screwed up the party and the night. It was me, the one and only, Roger Murphy.

Inside our room, Arin helped me with my clothing. She ordered cold pads and walked back in. Her half-smile greeted me every time she looked over.

“You know you can tell me if you are angry,” I said. She popped her head out from inside the closet area. With bridged eyebrows, she tiled her head asking me to explain. “Because I ruined it, the party.”

Emerging out in track pants, she hopped onto her side, pulling my cheeks before peppering them with kisses. “I told you already. It wasn’t you.”

I sighed, shifting uncomfortably on my side of the bed. She pulled me up, tugging pillows behind me. Her gesture pulled my heartstrings. I was an idiot to have ignored this girl for so long. Even after knowing who she was, I didn’t value her.

She placed her head on my chest, listening to my heartbeat as her arm coiled over me. She sighed before humming a soft song.

“I love you too,” she whispered, as the lights dimmed in the room.

By morning, my hand was twice the size. Although Arin tried all ways possible to help with the swelling, we had to go for an X-ray. I knew Arin was still worried but even after my million requests, she didn’t reveal it.

Her answer always remained the same that I was thinking too much but I knew I wasn’t. Having known how she looked generally, a happy and joyful person, I knew she was hiding something. A part of me wanted to jerk her out of her mental space and ask but that task would require two functional hands.

I wouldn’t say the injury was unbearable but it wasn’t a picnic either.

After the x-ray, we sat in the waiting room when voices around us started whispering. We looked up from our side hug to see my photo splashed across the news channels. The tagline was the most interesting.

Brandon wasn’t ailing and he definitely wasn’t a father. Arin walked towards the reception. There were a few in the crowd who realized I was the wannabe son who did that to his father. With the television switched off, she returned.

“What did you tell them? That you will break their screen?” I asked.

She smiled and turned towards me, holding my face in her warm palms. “No, I said I will sue them for mental agony.”

I chuckled. This wasn’t the time or place for what I wanted to say to Arin but she had won me over. In all her different ways and styles, her various avatars, she had captured my heart. I wasn’t going to spend another second, keeping this secret inside of me.

“Babydoll,” I called her. Arin stopped her hand rampage inside her bag to look at me. “Marry me.”

I saw the effect of my words. Her face lit up before falling into a frown, she smiled before bridging her eyebrows. She carried all possible human expressions on her face before her eyes glistened. She nodded, placing her hand over her mouth as a paper bag for air.

“Don’t cry here,” I whispered. “People will think I did something to you too.”

She giggled, wiping her nose onto her sleeves. “Like you can stand a duel with me!”

I pulled her close with my functional hand. “Is that a mock I heard, babydoll?” She nodded. “Then be prepared for some rough times when we get back.”

Arin leaned over her chair, whispering. “You sure you can handle me with one hand, broken boy.”

I was set on fire with her wordplay. A smirk emerged from my lips, watching her mirror my expression. The doctor called my name, breaking out power play in the hospital.

When we walked back in, he held the X-ray in the light before turning back. “So good news. There is only a hairline fracture.”

“Only. What more did you want in my hand, doc?” My cause of worry seemed to set out a giggle for him and Arin. He scribbled prescriptions on his pad before tearing it across to Arin. “Can I ask you one thing?” He leaned over, bobbing. “How careful do I have to be? I mean, can I pick up someone with my hands.”

As the doctor’s gaze shifted to Arin, she scrambled back on her feet, reduced to the size of a ball.

“Take it easy for a while, young man.” The doctor patted my back and walked away. Arin punched my gut as soon as he was out of sight.

“What were you thinking?” she sneered.

“I just wanted to win the bet I had with you.”

Although Arin bit her lips, strangling her smile to die, I knew she felt relieved that wasn’t brooding over yesterday’s incident.

Back home, Arin was the doting fiancé who cared for me like I suffered a major fracture.

“It’s only hairline,” I cried out as she tried force-feeding me soup.

I spit it onto the bowl which she held near my chin. Her angered expressions watched me as I smiled.

“You want to sleep alone?” Her threat was real. It was only soup, I told myself before rolling my eyes and somehow managing to keep it down.

“How can you feed me this while you keep having oily crap?” I protested.

“You get well, then we can have the oily crap together.”

I pulled her onto me. She carefully slid the bowl on the side table before falling to my side. “I am fine. I can bone you right now.”

She showed her thumps down and stuck her tongue out. “I won’t do anything to a man who says boning.”

Pulling her closer, I bit her lower lip. The knock on the door scrambled us back. The help walked in frantically, looking between me and Arin.

“There is someone at the door,” the maid said, fidgeting with the edge of her apron before walking out.

Arin and I walked out at the uncalled visitor. I walked slowly behind her, who reached the front door first. By the time I reached to her side, her concerned looks were back.

“They are here for you,” she moved away from the door as I watched cop cars staring at me from the driveway.

A man in uniform turned me around towards the door. “Roger Murphy, you are under arrest for grievous assault on Brandon Murphy.”

Turning back to Arin, I finally understood the concern she carried since morning. She had anticipated this since yesterday.

A happy day turned gloomy as I walked back to their car. Arin’s words called out, “I am right behind you.”

The officer turned to her. “Ma’am, family members are not allowed in there.”

Determination sprang in her voice as her chest widened, answering. “I am his attorney.” 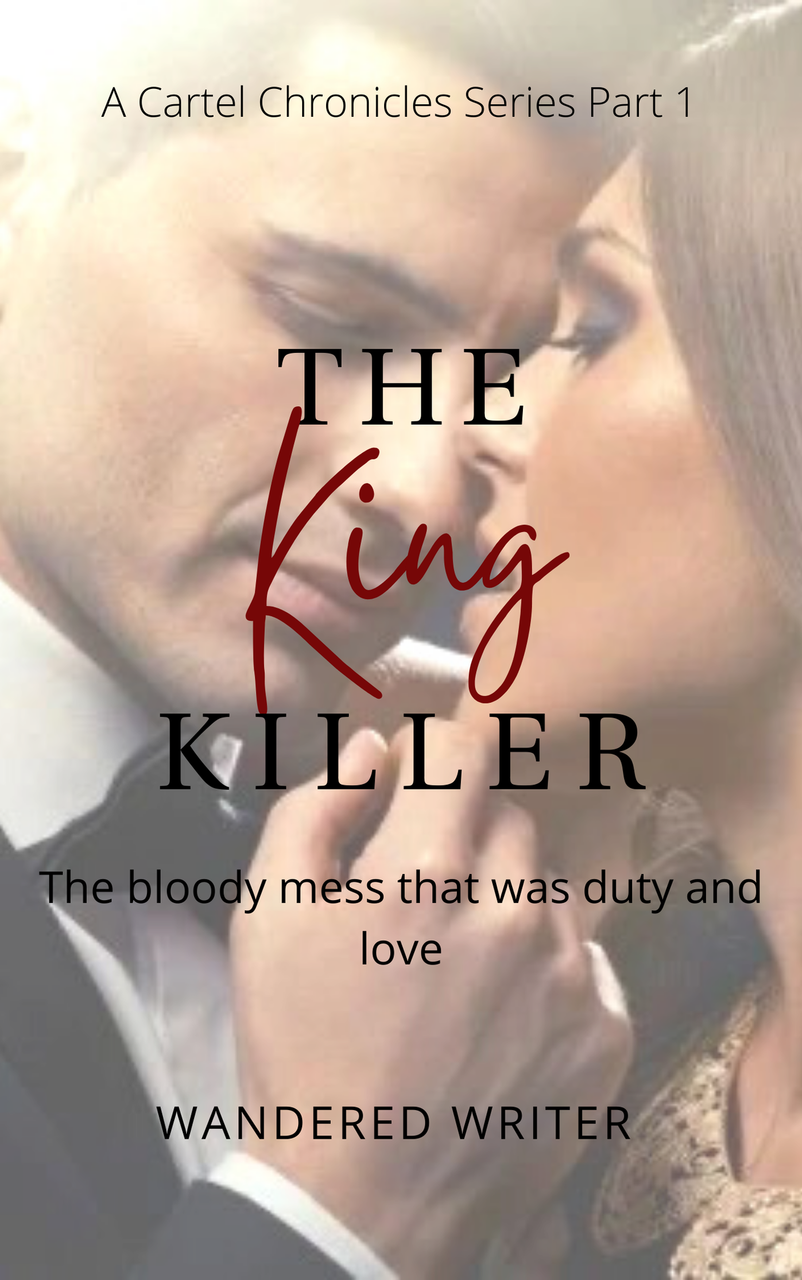 A new novel is released. A mafia series of three brothers. Hope you all show your love and appreciation for the book as much as you have for this one.

Hope to see you all soon...

Asides, did you like this chapter? Let me know in the comments. I would love to hear from you?
What do you think is Brandon’s plan? Comment your guesses.