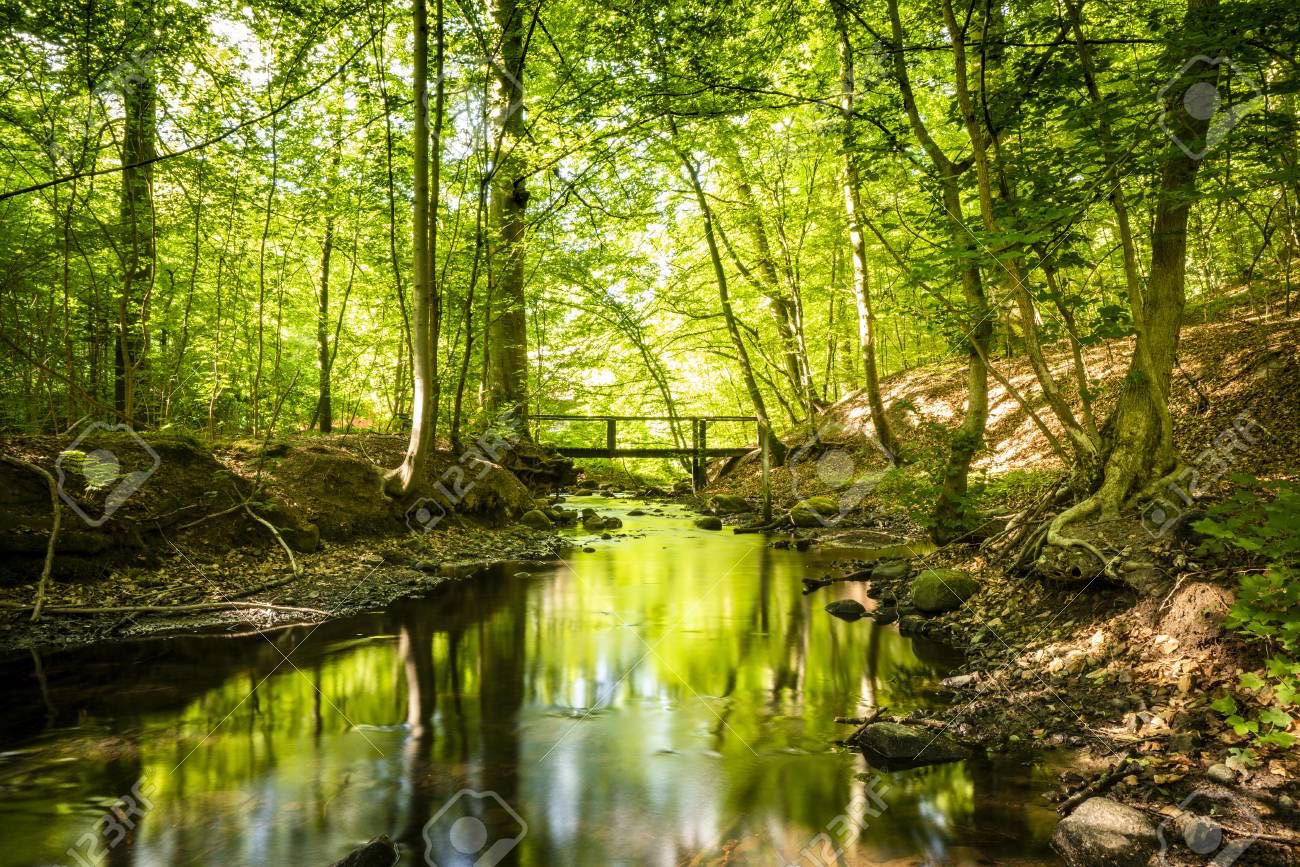 Kaira stood at the centre of her dream sanctuary. It always took her to her favourite place back home. A beautiful green forest with a bridge resting over the clearest water you’ll ever see.

Kaira cherishes her memories of picnics with her parents and sibling at this forest. She would teach her sibling how to swim in the water while her parents watched them with affectionate eyes.

As she stood on the bridge, tears began to pour down her swollen eyes. Soon, her sobs began to fill the forest as she wished with all her heart that she could return to this forest back home and see her dead family just one more time.

Suddenly, Kaira felt a sudden stillness take over the forest. She felt a presence to her right, about ten feet away. Her heart began to beat extremely fast as she turned to look at the man she ran away from. Overwhelmed by her emotions of grief, and perhaps the mate pull, Kaira looked into his cold blue eyes and ran straight towards him. Her actions seemed to surprise the Alpha himself as his eyes widened when she threw herself against his body.

“Bring them back, please. Please? I’m so tired of being lonely, why did I survive but they all had to die?” Kaira sobbed and wrapped her arms around her mate, her tears staining his shirt. She felt his strong arms wrap around her shoulders, as his hand caressed the back of her head.

“I promise, I won’t let you feel lonely ever again.” Alpha Crimson declared as he held her tightly against himself.

Upon hearing his voice, Kaira instantly snapped out of her daze and pushed Alpha Crimson away from her. She began to take several steps away before the Alpha rushed forward to wrapped his arms around her again.

“Mine” Alpha Crimson growled possessively as his hold tightened around the young woman’s small frame. He took a deep breath as well but frowned when he couldn’t smell her actual scent. She had masked it with some perfume.

Alpha Crimson looked down at his beautiful mate and wiped her tears away. His palms rested on the sides of her face.

“Why do you keep running, my little mate?” Alpha Crimson whispered in a gentle voice which took both Kaira and himself by shock. He had never spoken to anyone in his life so gently before. Not even his own mother heard him speak so gently.

Kaira found herself leaning into his touch and closed her eyes. Her wolf craved her mates touch and she couldn’t bring herself to back away.

Alpha Crimson smiled wholeheartedly as his mate accepted his touch and didn’t pull away from him. He let his eyes roam over her beautiful dark brown hair that cascaded down in curls, her cute chubby cheeks that held hidden dimples, her plump pink lips, curvy figure and her exposed neckline.

He suddenly let out a ferocious growl at the sight of her neck though. The whole forest shook as the Alpha’s growl resonated through the fields and birds could be heard flying away quickly.

“Who did this?” Alpha Crimson snarled as he gripped onto the sides of his mates trembling shoulders.

Kaira came to her senses and let out an ear piercing scream before pushing the alpha away from her. She slowly backed away from the bridge, maintaining at least five feet in between them. She had completely forgotten about the fake mate marking that she had temporarily tattooed onto her neck.

Kaira took a good look at the mate that she came to despise in such a short amount of time. He was wearing nothing but dark grey sweat pants, his hair had grown a bit more than the last time she had caught a glimpse of it. His tattooed neck, chest and arms were on full display as he crossed his strong arms over his chest and gave her a hard look.

Kaira’s eyes subconsciously drifted over his toned abs and if Kaira wasn’t utterly petrified, then she might’ve drooled over his extremely attractive body.

Alpha Crimson’s eyes narrowed and shifted to her stomach. The oversized shirt that she was wearing rode up a bit and he could make out something that looked like a bump.

“What. Is. That?” Alpha Crimson growled out in anger as he fought to control his wolf. He didn’t want to believe that his own mate would allow another man to touch her, he himself had never taken another woman to bed.

Kaira shrunk back in fear and her hands flew to her stomach in shock. This was the first night that she wore this fake bump to bed so she didn’t know that it would show up in her dream land as well.

Alpha Crimson snarled at her action that, from the outside, was the typical image of a shewolf protecting her unborn child from a threat. She should only be bearing his pups and protecting their little family.

The more Alpha Crimson thought about it, the angrier he got. He couldn’t believe that there was a possibility that his mate let another man touch her. Even he had not taken another woman to his bed.

Kaira was frozen at the shock and betrayal etched onto his handsome features.

“Who is he? I’LL KILL HIM,” Alpha Crimson questioned in a menacing tone as he took several steps closer to her.

For each step he took forward, Kaira took several steps back. Her eyes darted around the forest as she tried to plan out an escape route. She couldn’t believe that she had slept so long, she even put an alarm to be woken up after an hour!

She prayed that something or someone would wake her up soon.

“It’s okay, I grew up in this forest. I know it better than he does, ” Kaira whispered to herself before sprinting into the deep forest.

Alpha Crimson let out a thunderous growl at his mates disrespect before shifting into his large black wolf and running after her. Kaira could not shift into her wolf, if she did then her actual scent would show and Alpha Crimson would use that to track her down plus her fake baby bump would get torn apart.

Kaira knew that she was no match for the Alpha, especially while in her human form. She could never outrun him on her two feet. Hell, even if she was in her wolfs form, she would never be able to outrun an Alpha.

Kaira found the tallest tree in the forest before climbing onto its highest branch. She could make out the shape of her mates wolf circling the tree at the bottom.

Alpha Crimson shifted into his human form before glaring up at the stubborn woman. Suddenly, a loud slap resonated throughout the forest. The furious Alpha’s gaze snapped up in utter shock with his mouth agape as his mate continued to slap and pinch herself. She was clearly attempting to wake herself up.

“Kaira Regan Crimson, so help me God, if you don’t stop hurting yourself, I will come up there and make you beg for mercy” Alpha Crimson growled out as he narrowed his eyes at the shewolf.

Kaira couldn’t stop the tears from flowing down her eyes and she began to slap herself even harder.

“Come on, come on, wake up, please, wake up!” Kaira pathetically pleaded with the Moon Goddess to help her wake up.

Alpha Crimson let out a warning growl that made all the trees in the forest shake. Kaira held onto the trunk to stabilize herself before she got the perfect idea.

Kaira quickly bent the branches near her and threw them down while letting out a surprise shriek. Alpha Crimson immediately stood where the fallen branches came down, thinking that Kaira had slipped. Kaira used that to her advantage and flung herself off the tree, in the opposite direction.

Alpha Crimson barely had any time to register the fact that his own mate just jumped to her death. The moment he took a step forward, it was already too late. Kaira’s body hit the ground and he woke up screaming.

“KAIRA!” Alpha Crimson screamed loudly, waking up all the guards and wolves outside.

Beta Zachariah, Theta Grant and his tracker, Jacob, were waiting outside his bedroom to see how the dream idea would go. As soon as they heard their Alpha yell, they ran into the room.

Alpha Crimson had sweat dripping down the side of his face as he ran his fingers through his hair.

“Alpha, what happened?” Jacob inquired, hoping for a lead that would help him and his team find their Luna.

“Did you see Luna? Was she badass?” Beta Zachariah asked excitedly before Theta Grant elbowed him.

Alpha Crimson slowly lifted his head and the three men were met with his piercing gaze. They gulped and took a step back, knowing that their Alpha was absolutely furious.

“So help me Moon Goddess, I will find that woman, and I will destroy the man and pup who dared to claim what’s mine” Alpha Crimson snarled viciously, leaving the three men gaping at the new revelations.