Brook would love your feedback! Got a few minutes to write a review?
Write a Review

I got into the car and instructed my driver to head back to the building. I looked out the window and went over the intriguing conversation I had with that enticing woman. Octavia Patterson her voice rang in my head almost like a piece I’ve heard from an opera I sat for two hours to listen to the music and wake myself up to clap for the ending; not boring, but soothing enough to calm and relax my muscles to the point of sleep. Since the second she didn’t practically bow at my feet and listen to my every word I knew I needed to do more research on her. Her daughter is cute as well, polite and had a smile of a princess. I was a sucker for kids, they had a side that kept them bright and not a groggy, coffee-addicting person with a knife up their ass.

I walked into the building after thanking Lynn and told him to go on break until I came back to head home. I got into the elevator and took my chance to take a moment of silence until I entered the chaos of the 7th floor, which held my office. I heard the elevators soft ding and walked out once the two doors slid open, I tried to quickly make it to my desk until the girl who worked at the desk spoke and I groaned.

“Don’t forget you have interviews starting at 11 A.M. to 2 P.M., sir.” She seemed a bit stressed to speak up since my assistant would usually remind me of events the next day after all meetings are finished for the day, but Samantha chose to cheat then steal from me so at least I won’t have an assistant I want to yell at all the time...hopefully.

“Thank you, Clara.” I continued walking until I reached my office and shut the door before sitting in the chair and getting to work on the girl, starting simple with looking up her name and being a stalker as people called in. I just call it ‘I’m rich and I can do anything.’ When I found no pictures on images that matched her I searched up Princess’ name. There were no pictures other than two, it was one of a Octavia and her daughter walking out of the library toward the car and one with Octavia again and a man smiling in what seemed to be a hospital. She looked tired but her eyes showed she was happy, then I noticed the hospital gown and assumed that was the father and her during Princess’ birth. The photo was either taken by a nurse or family member and the father didn’t seemed so thrilled, which explains why he isn’t in the picture figuratively.

I clicked the link to the photo and sure enough, Ascension All Saints Hospital, which last I recall was just about one of the worst hospitals in Wisconsin. I soon searched up her medical records, see being rich had its perks, and read to myself about the situation. I took a deep breath when the records showed no signs of Octavia Patterson once again. The pictures all connected to the same files but the name still didn’t match. Last time Octavia was ever at the hospital was about 6 years ago when she was reported missing from the hospital after she came in with a stab wound. I took a better look and the files to figure out why the names didn’t match, nothing. Instead I got a Harry Noelle&Quintessa Noelle.

I went to the Wisconsin city website and went to ‘missing’ page, none of them came up other than one familiar one; although the name Quintessa came up again.

Reyna Noelle: 10-months-old. Last seen in her crib, there was said to be a break-in that could have resulted in this baby girls disappearance. Was presumed dead December 10th, 2013. That was all it said, I pressed the heels of my hands into my eyes and thought through the wrong connections. Now at this point I was invested and continued my research after office hours, my coworkers said their goodbyes and the only lights on were now my office ones and a few scattered ones in the hallway.

I then typed in Quintessa Noelle and immediately found pictures and social media accounts so I clicked on the Facebook profile. Her last photo was on April 29th, 2009 and no sign of anything after that. The profile seemed legit, it was Octavia alright but...maybe she had a twin sister and I was researching the totally wrong woman and stalking this girl I wasn’t looking for. 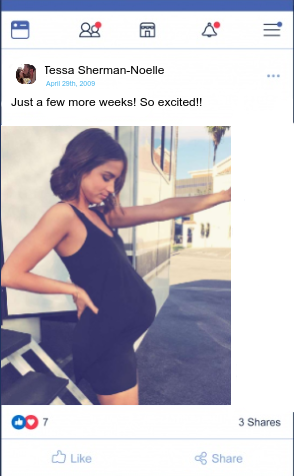 I sighed and turned off my computer, having a hammering headache. Guess I’m going to the library after interviews. I told myself and stood up from my chair, packing and soon leaving to head home.

Waking up the next morning with a splitting headache was not pleasurable nor was I grateful. I took some medication and downed it down with water as I rushed to the shower and stripped, stepping into the already steaming and scolding water head. I let the water fall down by body, it was relaxing and soothed my headache nicely as it teamed up with the pills I took.

Once I got out and brushed my teeth I fixed my hair and quickly shaved before getting dressed and leaving my house, getting in the car with Lynn driving.

“Good morning, sir. Do you plan on going somewhere today?”

“That library we went to yesterday, I believe that is it unless an unplanned meeting comes up. I apologize if there is an unplanned situation in advanced, Lynn.”

The driver smiled to himself a little as I thanked him. He pulled into the parking space and wished me a good day as I left the car and walked into the building. I received many good mornings to which I didn’t give back on my way to the elevator, I pressed my floor and successfully made it to my office without any complications. My morning was going a bit better than I hoped.

I spoke too soon.

“Would you like to start interviews, sir? There is a line of people...or...girls...waiting.” Clara spoke from the phone. I told her to send them in and then began my torture of listening to flustered woman ages 18-the oldest of 47. I didn’t exactly like any of them but the one that fit most of my needs as an assistant and seemed to have a good resume was a 27-year-old female named Harper Maddox. She had dirty blonde hair and came in clearly prepared for the interviews, I only thought about how a part of me had hoped Octavia would come in throughout the whole thing. No luck...

I walked into the library with a file, took me a whole damn month to finalize my theories on the mysterious librarian named Tessa. After deep deep digging I found out her birth name, maiden name, married name and her legally changed full name. At first I kinda thought she had a twin and kidnapped her daughter or something, luckily it was nothing like that. Tessa and I bonded over the month I was practically stalking her, but I needed to gain her trust...and I also wanted to get to know her. I got to know her pretty well in just a span of a month actually.

Juniper and her had been friends since the day she started working, Griffin seemed cautious of her because she put another girl in her place but they were still good friends. Griff and June clearly had tension between them but claimed nothing was going on, which I call bull. Reyna didn’t go to public school, and she usually stayed by Tessa’s side all day every day. Tessa was extremely protective of her, apparently some girl tried assuming Reyna was being abused which Tessa did not take well.

“Te-Octavia.” I looked at her as she sat at a table, noticeably on break. Whatever reason she had to change her name and her daughters surname I wasn’t about to out her in case she was in danger; if that was the case, I was about to do anything in my power to help them and protect them. I leaned down so I stayed quiet and she could still hear me, “can I speak to you in private?”

I heard Liam’s voice as he walked into the library, I instantly smelled his cologne and felt his presence next to me. The question he asked got me worried and freaked out a little and suddenly thought of every bad thing he would do or say or even think. I took a deep breath as I stood up, glancing to a once again sleeping Reyna and walked into the very back in the history second where no one was even around and looked at him as we both sat at the corner table. He looked into my eyes as if he was both apologizing yet telling me he caught me doing something. I looked at the file he slid across the table, I glanced at him with a confused look and hesitated before taking it and opening it and my heart instantly dropped. It had my photos back in Wisconsin, a copy of my birth certificate, a copy of my marriage and divorce papers and worse, Reyna’s birth certificate. The pictures were me with my ex and my parents.

Liam linked his hands together and set them on the table; even though he wasn’t wearing a suit today, he still looked intimidating. His voice didn’t seem like he was about to out me to everyone and put me and my daughter in danger though, so I didn’t freak out as much as others would do in this situation.

“Are you ready to talk, Tessa Noelle?”

I kinda got bored a little in the middle, I apologize lol.

Think June and Griff have a little some some there?

I will be most likely referring Octavia as Quintessa/Tessa by the way, there will be some with Octavia but I really hope it does not confuse you guys lol.

And listen. Inkitt isn't the most supportive app on there, hence why I am writing this on Wattpad and transferring it. All hate will be blocked after I put you in your place because that is NOT how it is in the book world. I write for myself and the people who do support me, not the bitches who pull me down because I'm not Nora Roberts. Grow the fuck up. To the good people here, thank you.

Don’t forget to comment and vote and I’ll see you in the next chapter!