Alisha P.J would love your feedback! Got a few minutes to write a review?
Write a Review

Ah!!!!! this will be awkward, how am I going to face Mr. I mean Zach. What happened yesterday night or do I say what would have happened, just made everything super awkward. Oh, come on Anna, you can’t just sit in your room for the whole day, I took a deep breath and gather all my courage to face whatever comes on my way. That’s right, I have to deal with my problems like an adult. With a little prep talk, I walked downstairs into Chase’s room.

“Wakey wakey sunshine,” I walk near his bed to tickle him.

“HAHHAAHAHAH, Anna got scared, Yeah!! I scared Anna,” I placed a hand on my chest breathing heavily when that little devil laugh clapping his hands.

“What happened!” Zach ran inside the bedroom looking scared.

“Daddy, I scared Anna,” Zach looks between me and Chase and done something I never expected him to do. He Laughed. Yes, he laughed.

“Little monkey, wait till I get you,” I tried to catch Chase but he was fast enough to run to the living room, I followed him and Zach was behind me. This kid is faster than I thought.

“Daddy! save me” He yelled for help.

“Oh, no no, nobody can save you from me,” we were making rounds of the couch. I was waiting for the right opportunity to catch him. I tried to distract him and was about to grab his hand when within seconds he turned left and I crashed into something hard and fall on the floor.

“I should be the one saying that,” I open my eyes to found Zach under me, his hand was on my waist making it hard for me to move, he was looking deeply in my eyes, the confusion I had noticed yesterday was gone now. On the contrary, I could see admiration, care, love. Are those emotions for me? No, that’s not possible. I shook my fairy tale thoughts. Chase laugh again and ran inside his room.

I tried to move when he groans like he was in pain. “I suggest you don’t move Anna, it’s doing something,″ I don’t know what he was trying to say so, I tried to move again, but he flips us and now he was on top of me.

“W-What a-are y-you d-doing?” I stuttered. His breath was fanning my face, I was inhaling the aftershave mixed with his natural scent which was driving me crazy.

“Told ya, it’s doing something, and it did,” he said coming closer. I freeze on the spot. The number of times I’m freezing nowadays, I’m damn sure I’ll get pneumonia for sure.

I closed my eyes and could feel his nose touching mine, I have to stop but I didn’t want to, this is wrong but why feels so damn right.

His breath was coming near my ear, “Not yet, Anna,” he said and stand straight. My eyes were wide open, he smirked looking at my scarlet face. He holds out his hand and I took it to get up. “See you at breakfast,” he winked at me and walk to his office room.

Did he hurt his head just now? What was with that wink and he was flirting with me. He is not playing with me, right? I question myself. He is not a playboy like Mason or any other billionaires, then why is he acting strangely to me. I’m not complaining about him being carefree or anything. It is just not good for my heart that’s all.

I went inside Chase’s bedroom calling his name,” come out little monkey, I’ll not tickle you, promise,”

“Pinky promise?” I heard his voice under the bed.

“Pinky promise, now come out, we have to take a bath,” he came out to hug me.” You are getting naughtier day by day, aren’t you,” I blow raspberries on his neck, making him giggle.

“Stop-p it, Anna, it t-tickles,” he said between his laugh.

“Only if you say the magical words,” I said.

“Okay, I am sorry and I love you,” he said kissing my cheeks.

“I love you more,” I carried him to the bathroom and filled the tub with warm water, after his shower and dressing up, I took him to the dining area.

Zach came from his office and we all took our seats, I put the food on Chase’s plate and put some fruits on mine, my phone went off and I look at the Id before picking up, it was Mason.

“Hey, Mason,” Zach’s head snapped my way, avoiding his gaze, I continue my talk, “I’m fine, about to have breakfast. Yeah, talk to you later, bye.” I cut the call and put the phone on the table.

“You guys got close in the short period,” he asked in an annoying tone.

“Yes, he is very funny and sweet, I feel comfortable with him,” I said eating my breakfast.

" FYI, He doesn’t do relationships.”

“Why are you telling me that?”

“I didn’t want you to get your hopes high, you may get hurt, ” he said with an arrogant smirk.

“FYI, I’m not hoping for being in a relationship with Mason or anyone for that matter, and whether I get hurt or not, that’s none of your business,” I whisper yelled at him, I was annoyed by his mood swings, one moment he is all funny and caring and boom the next he is back to his old self.

He was furious and probably wanted to yell at me but thanks to Chase’s presence he didn’t get to do such a thing. I quickly ate my food avoiding his stare and took Chase with me. The day went by, Chase playing games, me avoiding Zach, and Zach being grumpy.

Today is Sunday, Mason has asked me to hang out with him so, I was being ready. I put on a yellow sundress which has Lillies on it, with a brown jacket and brown boots. I pick my handbag and phone and walked downstairs. Mr. grumpy pants was working in his office, he didn’t know about my plan, I had only told John and Chase about it.

I came to the living room and the bell rang at the same time, “I got this,” I said to John and walks to open the front door to face a smiling Mason.

“Hey, beautiful, ready to go,” he kissed my cheeks, and I nodded my head and close the door behind me.

“Where are we going?” I asked while we were inside the elevator.

“It’s a surprise, wait and see,” I rolled my eyes and he chuckled.

We got inside his Audi and headed to our destination which was still unknown to me. One hour of ride and we were outside of Newyork, I was out of patience right now. “Will you tell me where the hell are we going, I’m hungry now,” I yelled from the top of my lungs.

“Relax, Women. we are here,” he pulled his car in front of a diner.

“Did you really drive one hour to get me to a diner?” I was furious, I opened the car door and got down without waiting for him. I was hungry anyway so, why not go inside and have some food.

“Anna, Anna, wait. It’s not just diner, this place is popular for something else besides its food,” I raised my eyebrows asking for assurance. He grabbed my hand and we walked behind the diner.

“The entrance is that way Mason,” he ignores me and continues to walk.

“Wow! I didn’t expect it to be like this, this is amazing. How I didn’t know about this place before,” I asked being amazed. There was a small waterfall, and the tables were on the water, the open kitchen was beside it. It was heaven on earth. 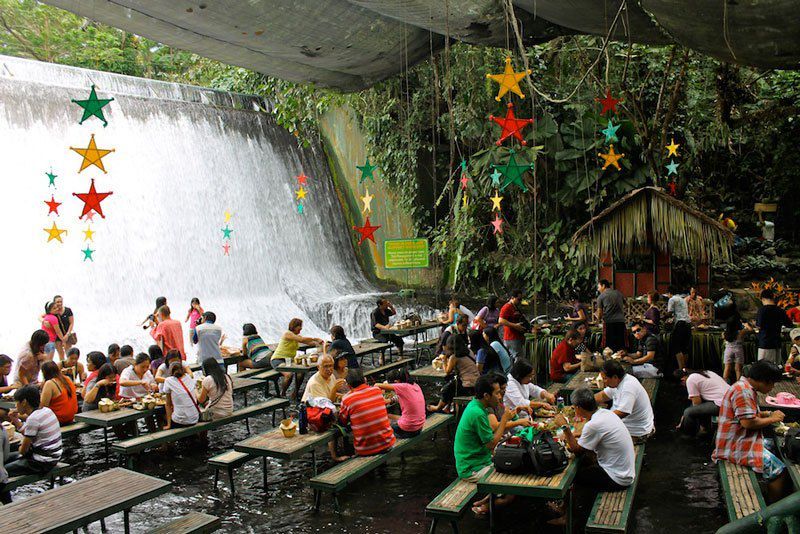 “Told you, it will be worth the wait. Come on, let’s go,” We took our shoes and put them in the shoe rack, the chill water, and the pebbles made my feet refresh as if I’m taking a pedicure.

“What do you want to eat?” Mason asked handing me the menu.

“The chef’s special,” the waiter came and took our order. “Why did you bring me here out of all places, not that I’m complaining.”

“You were my date that night and I was not there to protect you from that asshole, it’s my way of apologizing for being a stupid date,” his sincerity warm my heart. I place my hand over his.

“First of all, that was not your fault, and this is the beautiful apology I ever got, thank you.”

Our food arrived and it was yummy, the layout of the diner, the view was worth the time. We were enjoying the music and forget about the time. It was already 5 in the evening and we left the diner. The drive took longer than expected due to heavy traffic. Mason pulled over and I got out.

“I could come inside,” he wanted to drop me inside but it was not necessary.

“It’s okay, Mason. It’s 8 already, thank you for today, just drive home safely, Good night,” I wave my hand and he waved back and left.

I entered the elevator and pressed the button. I was getting anxious with every passing second, I didn’t want to be this late, I have no idea how Zach will react after our little disagreement. The door opened and I got out. Moving towards the double door my heart was beating faster. I ring the bell and tabbed my foot on the floor waiting for John to open the door.

The door got opened but just not by John, rather furious looking, Zach.