It's Poly Medusa would love your feedback! Got a few minutes to write a review?
Write a Review

All rights reserved. No part of this publication may be reproduced, distributed, or transmitted in any form or by any means, including photocopying, recording, or other electronic or mechanical methods, without the prior written permission of the publisher, except in the case of brief quotations embodied in critical reviews and certain other noncommercial uses permitted by copyright law. For permission requests, write to the publisher.

“How would you describe Mr. Henderson,” Rachel asked nervously. It was her first day at Henderson Inc; the top fashion brand in New York City. She was still in shock that she was able to commit to the organization through her college.

Rachel nodded with confusion lased in her big hazel eyes. They continued to walk down the long spacious hall that had bare walls and hard marble floors. The sound of her heels echoed as they walked.

“Well, he’s the male version of that, if not worse. Just stay on his good side and you will be fine.”

“Don’t worry too much. Just pay attention when he talks. Try not to miss anything important. . F.Y.I, He’s gone through five assistants in the past month and they all left crying. If you stick around then I’ll be more than happy to show you the ropes. Good luck.” Jessie stopped walking and pointed to double doors.

“Thanks.” Rachel thanked the man but he was already walking away.

Rachel pushed the door but it wouldn’t open, so she knocked. She waited but no one answered. Checking the time on her watch, it was 10:10. Her meeting with Mr. Hendersaon was at ten and she wondered if she blew the opportunity before it even began. She went to try again and this time she used all of her strength to open the door. To her luck, it opened. However, she fell through the doors.

Her body collided with the floor and she groaned in pain. She looked up to see an emotionless Mr. Henderson putting on a shirt. 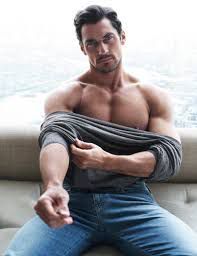 God, the way his muscles flexed whenever he moved his arms, the way his abs looked so defined and lord have mercy, the man was drop-dead gorgeous. Rachel was so lost in thought that she didn’t even realize that she was gawking at the man.

The man stood to his feet and stepped over her body and into the hallway.

“Never wear that outfit again. Ms. Jaeger. It does not flatter your figure. If you intend to show up late to an internship then don’t even bother coming at all. There are millions of young women willing to take the job your fighting for.” He checked the time on his watch. “How long are you going to kiss the floor? I’m a busy man and so far your not worth even a minute.”

“I-I’m sorry.” She stumbled to her feet. “I was actually stuck in traffic.”

“I do not care about your personal life. All I need is an internship who intends to take this job seriously. The next time you show up late, do not even bother clocking in.”

His jaw clenched and unclenched. “Sir will do just fine. Here are the rules: you are my intern. When I ask you to do something, you do it. No questions asked. If it’s not done the way I want it to, then you will do it over again no matter how long it takes you.” The two began to walk down the hall. “Do not ask me for any favors. Never transfer calls to me without my consent. Do not send anyone to my office before running it through me via email or telephone.”

The man glared at her, making her feel little to nothing. Irritation was swarming through his sea-blue eyes. Repeating himself was something he loathed alongside an incompetent employee.

“Your free every Monday, Thursday, and Friday so I expect you here at nine sharp. Not a minute earlier and not a minute late. When I have meetings you will sit in the back and take notes. Seen not heard. Fridays I work from home, you will still be here working unless I tell you otherwise. If you expect a career out of this I suggest you take this internship seriously. Otherwise, get out of my face. Do I make myself clear?”

He sighed, feeling as though his patience was already wearing thin with the woman. “The office you will be using is right here. Instructions on how to use the phone are on the desk.”

The phone began to ring the moment he stopped talking. Rachel was still taking notes while he gave her a heated glare. Rachel looked up to him and was staring awkwardly into his eyes.

“Are you just going to stand there or are you going to get to work?” Mr. Henderson said.

″Oh! I’m sorry, Mr. Henderson! I mean sir!” She went to walk into the office but tripped on the carpet in the walkway. Her face collided with the floor as the phone continued to ring.

Mr. Henderson gripped the bridge of his nose in frustration and left Rachel to struggle to her feet.

“Henderson Inc. Rachel speaking, how may I assist you?”

“It’s about time. Are you so incompetent that you don’t know how to answer the phone?” The man said over the phone.

“Transfer me over to Elijah.” The man demanded.

“You want me to transfer you to who?”

“May I ask who is calling?”

“Yes, this is Henderson Inc, may I ask who is calling?”

The man hung up the phone without expressing who he was or what he wanted. Rachel felt defeated and she barely spent time on the job. She was twenty minutes into organizing Mr. Henderson’s schedule when the phone ranged.

“Did you take this job not knowing anything about this job?” Mr. Henderson asked over the phone.

“Google the company name. Tell me the name of the CEO.”

Rachel did what she was told and came across her boss’s picture.

“That man you were just rude to be the founder of this company. Your lucky your just an intern because you were so close to losing a job.”

Her response was useless as the phone went dead.

The remainder of the day was spent fetching clothes, magazines, lunch, and other things for Elijah. The sexy beast had her on her feet running like a mad person throughout the building. She was happy when he said that he was leaving an hour early. That only meant that she had time to breathe without being insulted or yelled at.

It was her first day and she already wanted to break down and cry but it was the last thing she was going to do. This was her fresh start to a promising career and there was no way she was going to ruin it by running away.

aduerr46: Some of the stories must be written as a separate book

Baggie Keay: DEFINITELY the best so far..... also the longest but just bloody fabulous! I don't mind the cliffhanger because I am about to start book 7. I'm selfishly hoping you have almost finished book 8..... yeah I know, but a girl can dream can't she? Yet again a very well written and edited story that...

ErweGo: Absolute addiction. I stumbled upon this app on accident and kid u not i wasnt that optimistic until i found this gut-wrenching, heart-melting, roller coaster of a story. It's not hyperbolic nor metaphoric when I tell you that you.cannot.put.this.down.no.matter.what. Try it. YOu cannot. I bet you...

Noshi: Perfect end with a new twist with Cassie and Noah's kids in the next books !! Excited!! 🤗 🤗

Read Now
Pregnant by My Enemy by Hopeless Romantic

kessosiyoma3: I would recommend it to my girlfriend..we both loves reading novels and she also introduced some that she had read to me…I’m glad I came across yours 1st.

Cristal Bollinger: So good to read each story

Claire: The story plot was awesome and very anticipating