It's Poly Medusa would love your feedback! Got a few minutes to write a review?
Write a Review

It’s been a few days since Rachel has heard from Hunter. The last time she had from him was when he took her out on a date. After she got off work on Monday, he had taken her to Dave n Buster. Surprisingly she had never been and could not contain her excitement when they entered the building. Hunter watched her bounce up and down like a kid who just entered Chuck e cheese for the first time.

Afterward, he took her on A romantic date under the stars a few miles from the city. Hunter found a historical park and laid out a picnic blanket for them to sit on. That night was nothing dealing with drowning in intense pleasure. It was more of getting to know her on a more passionate level. Letting her know that he was more than a man that just wanted to get in her jeans for the night. They spent that night just talking and goofing around until they were the only two people around. The next day he had sent a text saying he was going away on business for the next two weeks.

Work wasn’t any better! Elijah Henderson had it out for Rachel and she did not know why. The man had the audacity to embarrass her in front of the other co-workers. He had made it seem like she was unfit for the fashion industry and belonged to something that fit her personality. A Human Resource Manager for a retail company. Saying that she was just someone that overlooks the business, someone that pretends to know the in and out of the company but nothing that actually makes the company strive. Rachel couldn’t let him know that his words had hurt her. Instead, she swallowed the lump in her throat and continued with her work as if Elijah didn’t insult the career she was pursuing. She spent her lunch break in her office crying over the material she had picked out for a future show. She was too embarrassed to show her face in the lunchroom.

Being his personal assistant wasn’t any better. She was forced to leave her concerns and doubt at the door. The man had her rip and running New York non-stop for errands. She was just blessed that it was Friday night and she didn’t have to deal with him until Monday morning. Earlier that evening had been hell. From him yelling at other assistants to him treating her like gum that was stuck on the bottom of his shoes. His very expensive shoes.

Rachel took her popeyes take-out and junk food and headed to her room. She would be alone for the weekend. The boys had taken Isabella to their place for some quality time. Skylar went back home to visit her family. And Hunter is elsewhere handling business. She wasn’t complaining though. She had a shitty week and all she wanted to do was sit in front of her tv while gobbling her food down.

A steaming hot shower and twerking in front of the mirror, she was spread across her bed scrolling through Netflix to find something interesting to watch. She was about to start an episode of WU Assisans when her doorbell rang. Rachel muted everything in hopes the intruder would leave. It was her weekend to herself and she was dammed if someone interrupted it.

The intruder ranged the doorbell once more until the person began knocking.

“I knew I should have parked in the back yard.” She muttered to herself. She laid back once the knocking had stopped. Her finger hovered over the play button on the remote but stopped once the knocking began again. Huffing she yanked her covers off her body and stormed to the front door.

“What?!” She yelled before looking at the person. 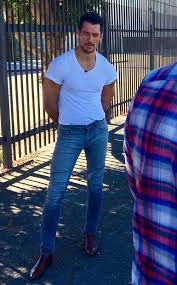 Elijah stood there looking at Rachel as if she had lost her mind. However, his next words were left unsaid when he gave Rachel a once over. A white see-through tank top that left nothing to the imagination. She wasn’t wearing a bra making it easy to see her pierced nipples. She was wearing a pair of matching boy shorts that were tight enough to see the imprint of her pussy. For the first time, he was speechless when it came to the clumsy Rachel.

“What are you... How did you... Did I..” Rachel stuttered. Standing in front of her was an Elijah in a pair of dark-colored jeans with a white t-shirt. Now granted this woman had seen this man completed naked and then played it off as if the situation never happened... He looked decent in regular clothes. If he wasn’t a total ass then maybe he would actually be attractive.

“The gala is tomorrow and I need my assistant there,” Elijah said clearing his throat.

“Gala? Isn’t that in Italy? I didn’t know that you were going and plus I’m off for the weekend.”

“Do you really expect the man who owns several fashion companies around the world to pass up the opportunity to attend the biggest fashion event of the year? Are you going to invite me in or are we going to continue to talk in the doorway?”

Rachel hesitated for a minute before opening the door wider for him to enter. He wasted no time in walking into her house and turned just in time to catch a glimpse of her backside. The short she was wearing was hugging her in all the right places. It made all of her juicy assets stand out more. The woman was toned and she smelled like cocoa butter and mango. He cleared his throat and diverted his eyes to his watch.

“I should put something on.” Rachel felt insecure with the leading man of the fashion industry in her living room. The way he had been treating her lately she felt intimidated all over again.

“You should pack for the weekend while you are at it.” He checked his watch ignoring her facial expressions. “Precisely three days will due.”

“You want this as a career right? Shall I find another assistant that wants this career? In order to do that you have to make some sacrifices in life.”

“I do not have anything to wear to the gala.”

The sway in her hips did not go unnoticed by him. How can the woman that has gotten on his last nerves be so... so damn mouth-watering? It angered him how could even look at another woman other than his ex-fiance.

But he had to give it to her. Whatever he threw at her, she took it and came back ten times stronger. Even when he heard her crying in her office, she came back to work as if nothing happened.

Elijah was intrigued by Rachel’s determination. It was nothing he had witnessed before.

It was going to be a long nine-hour flight from New York to Florence Italy. Rachel had assumed that they were headed to the airport to fly coach. Boy was she wrong and naive. Elijah’s driver had taken them to a private airport and they boarded on his private plane. It was only them and a few of the flight crew.

“You want me to do what now?” Rachel asked. Her head cocked to the side as she eyed her boss.

“There’s no need to feel insecure.” Elijah sighed. “It’s just us in the room and I need to see if the dress fits perfectly.”

Rachel placed her hand over her crop top to suppress a shiver.

“Worry not, I’m not the least bit interested. Besides, do you know how many bodies I have seen while doing fittings?”

It wasn’t that she was terrified of stripping in front of her boss... Nevermind, the woman was shaking in her Adidas shoes. Up under her black crop top, she was braless. Up under her fitted sweatpants, she was wearing her lace underwear.

Is that what it felt like to be a runway model?

Elijah walked back to her and began removing a navy blue dress from the bag. A bag that she had previously fetched from a tailor. Rachel deeply inhaled and exhaled before removing her top. Elijah silently watched as she pulled the top over her two puffy pigtails. Her perky breast bounced when the top grazed them. His eyes returned to the dress before she could catch him staring.

“The pants as well. I highly doubt this dress will fit over them.”

Her cheeks were flushed as she stared back at Elijah.

Sighing, she removed her shoes and pants.

Elijah practically choked on his spit. This woman was perfection with beautiful features. He hated himself wanting to trace her curves with the balls of his fingers. Clearing his throat, he held up the dress in his hands.

As he helped her put on the dress, his fingers unintentionally slid across her bare skin, leaving goosebumps. Elijah’s fingers slid down her spine causing Rachel to shudder under his touch. He felt it. He eyed the dress in satisfaction. The dress made her ass pop more than what it normally was. Not that she needed the dress to do that.

It was indeed one of her sketches she had shown Elijah a week ago. Unfortunately, he had turned the design down for one of the fashion events.

“I thought you turned the design down.”

“I turned it down for the client that would appear at the event. I never said that it wouldn’t look perfect on you.”

“I need to fix the straps on the dress and then we are good to go,” Elijah said, ignoring her question.

Elijah worked in silence. She felt as though he was caressing her skin whenever he had to touch her. She only hoped that he couldn’t tell how her body would shudder whenever she felt his breath on her or the way his large hand would gently touch her.

“All done. You have the rest, right?” Elijah whispered close to her ear with his hands still on her shoulders.

Her heart was beating fast and her breathing sped up a little. Fucking hormones.

Elijah began walking to the door, fighting the urge not to turn around. He walked back to the couch, sat down, and pulled out his laptop. He tapped into the cameras back at Henderson Inc. Jessie was staying late with a few others to work on a project. Instead, he found Jessie flirting with another co-worker. If he wasn’t a decent worker, Elijah would have fired him already. Switching over to the camera that was located in his jet, he wondered what was taking Rachel so long to come out. The camera over the bed showed that she wasn’t in the same place he left her in. Instead, he heard low moans from the bathroom.

He would never date or fuck an intern again. Never again.

The squelching sound mixed with her moaning had he already erection growing. That was something he couldn’t deal with so he turned his laptop off altogether.

This was going to be one long-ass flight.

Rachel couldn’t bear the silence any longer. So she did everything she could to engage in any conversation with Elijah. To his favorite food, drink to movies.