Raldineviv would love your feedback! Got a few minutes to write a review?
Write a Review 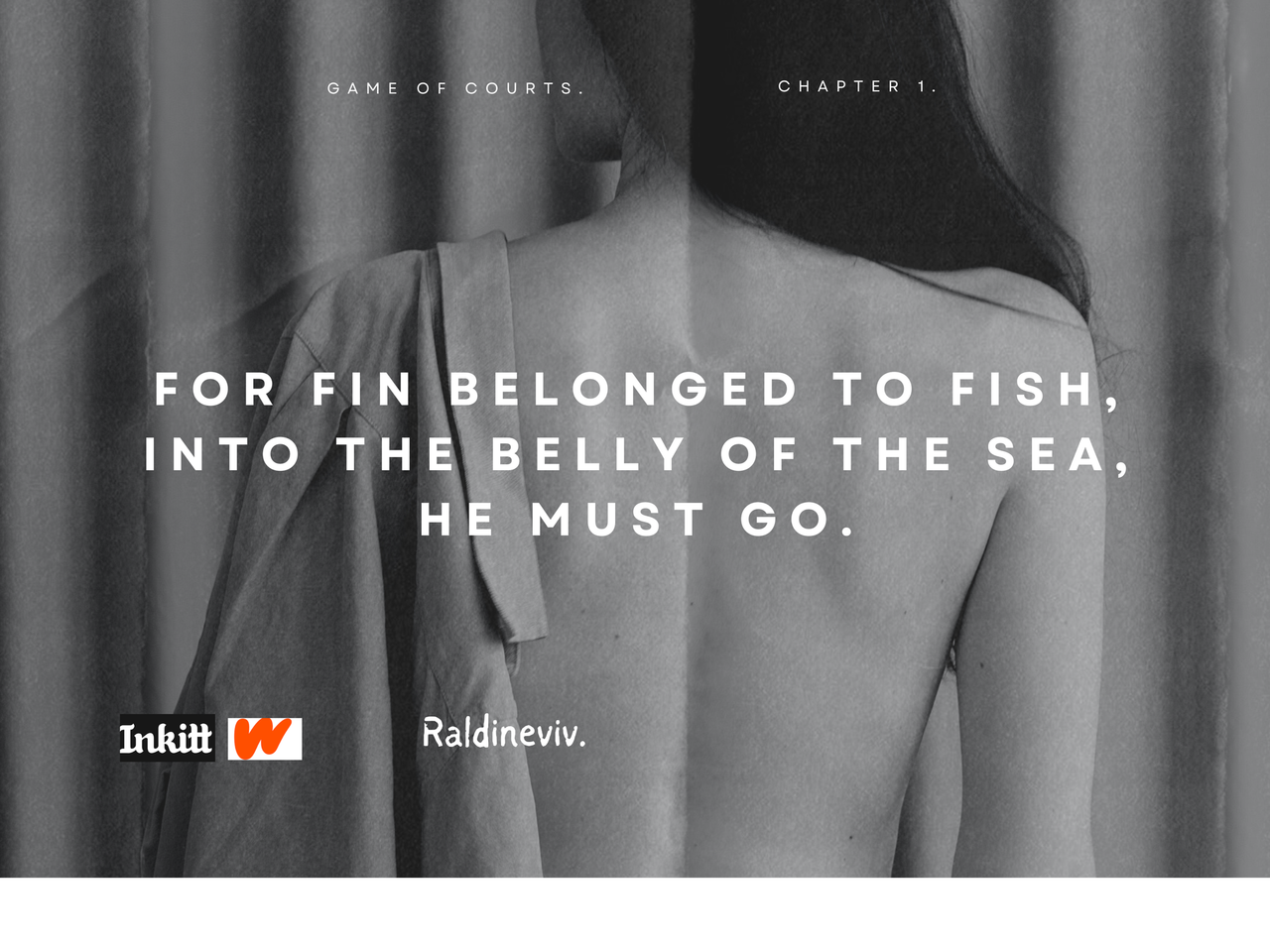 Guy had to die. It would be a mortal sin to let a man like her brother walk free. But that was murder for another day.

There were a few things Amanda despised; ships, rain, mother ,and Guy. They ruined everything. Another large ball of seawater hit the ship and she felt her stomach lurch, her head was light from throwing up everything she had been fed. She had told Guy-repeatedly-that there were better ways to get into England than being smuggled like a stowaway.

But he didn’t listen. Guy delighted in things that caused her misfortune and discomfort. She bit her lips to still oncoming nausea and wondered why they were yet to touch the shores of England.

Amanda surveyed the dark crate with the light provided by the silver moon, women and children huddled against each other, crying and whispering. They thought they were going to die tonight.

She wondered too, if she was going to die, out in the middle of the sea, disguised and unrecognized. But she could not, Amanda knew that, it was impossible for her to die now, here. She was yet to do so much.

Another devastating wave hit the ship and split wood.

She simply did not understand why they were all so happy. Well, she was not.

Indeed there was cause to celebrate after the storm that felt like years ended and no one sacrificed to the sea, their ship was still standing and the shimmering shorelines of England could be spotted.

After depositing the contents of her stomach directly into the pail in a very undignified way, she decided to look at her travel companions. The singing and dancing that had overtaken the ship was infectious but she truly wondered why they were so happy. Happiness was undeserved in England, a place full of stuck-up old Nobles that couldn’t keep their hands to themselves and obnoxious laws, debauchery that would turn a saint scarlet-plus a harrowing sojourn via sea.

England held no appeal for her. But that was not her choice to make.

When Philippe and Guy had imposed the idea, she caved. She had to.

It was filled with grubby men, scruffy children and tattooed women. The ship. Oily faces that told of hungry pasts. Amanda felt no pity for them, dressed in royalty she may, in truth her fate was as bleak as theirs if not worse.

At least they chose to be here. She exhaled and continued her study. All fifty-six females, she had overheard one of the ship crew say, were going to be sold to the elites of England and the men and children would put to work.

Living in France, she had heard of such trades but here was her firsthand experience. Thanks to Guy. And Philippe. And Father.

She knew, to the women, it was a way of escaping the hunger and consistent pneumonia that plagued the poor of France, by selling their bodies in exchange for a warm meal and a fur coat.

They could hold onto their withering dignity by doing it for a price instead of being forced and without a coin. The stories of debauchery and recklessness of the English court helped, the common knowledge that unlike France, the Englishmen were not picky of the women they invited to beds and often paid them off well.

They’ve even had bastards on the throne!

To them, England was salvation, Amanda felt different.

England was a curse, a death sentence that she had to face. One she could not escape.

Regardless, her new friend,-not that she willingly befriended the stubborn woman-Anne-Marie who had adopted the English name Anna—was as excited as hell, praying for both to be sold to rich young noblemen with title.

But as her story went, mother and her love for gold coins had thought otherwise and had sold her only child so callously to the sea. Magnificent parenting. She scoffed at the silly story. She didn’t know her mother.

Anna was a staunch catholic. So was she, but the church ended after mass however, the former was always praying. She prayed to be sold to men who had title, money and a shred of dignity. All impossibilities.

On very wild nights the woman prayed that Amanda would be favoured by the King.

She was going to end up with the King, with prayers or without. That was how the plan went, that was how it was supposed to be.

Amanda saw it as her noble duty, a repayment for the times when Anna fought to secure a meal for her, in return, she advised the older girl.

"None of these miserly English Nobles are going to treat a woman they bought with their gold coins well, I assure your. If you go to England, it would be wiser to start a trade, or find work rather than depend on airhead Englishmen. I know where I am going, you should pray more for yourself."

Anna didn’t listen, she wouldn’t. The woman was a stubborn mule.

Tis was the last night on the ship, there was an excited buzz from both merchant and goods. Amanda was thankful, the journey had been horrifying and she was quite glad to see it end. The time on the ship had given her time to think.

When you had nothing to do but to sit and be quiet, it left plenty of uncomfortable time with what went on inside one’s head. Amanda sighed and leaned over the railing allowing herself to indulge in the vein that would burst open on Guy’s fat cheek when he heard that his classic sister had hauled herself into the hungry belly of the sea.

She leaned away, she was not willing to end her life despite-

Someone suddenly grabbed her hard enough that she nearly tumbled into the sea. Turning furious, was this bastard drunk? Did he know how many years of planning and training that would be wasted if she had fallen overboard in the middle of the night?

She was faced with the flushed droopy eyes of a clearly drunk crewman. How lucky her stars must be; a drunken sailor.

“I would advice, for your benefit, that remove yourself and you desires”

“Saving yourself for your Master’s bed?” he crackled like he hadn’t heard her.

“I have no master” she hissed furiously, feeling like a liar.

She was on this ship because she was tethered to Guy, indebted to Phillipe and unable to break away. This drunk fool had hit too close to home, perhaps she should toss him overboard?

Nobody would miss him, she was sure.

“Come here you wench” he barked suddenly, flinging his hand and catching at her unfortunate long hair, twisting it around his wrist.

Should’ve cut the bloody thing off. He pulled, she hit her hand on the taffrail and yelped in pain. This was it, she was barely in England yet and here she was being attacked. The heavy sound of approaching footsteps was a relief, she hoped to God it was someone she had met.

God was on her side today as the face of the first mate came into view.

“Let her go!” he thundered.

He released her so quickly that she went tumbling. “Sorry Sire” The bastard said.

The First Mate came towards her and stretched his hand forward

She slapped his hand away, standing ungracefully. “I paid-Lord Guy Harcourt paid exactly to prevent incidents like this.” she looked at her attacker with disgust and rage. “You know what would follow, were words to reach him of such...mistake.”

Guy’s revolting character was helping her out now. Congratulations Guy, you were right. “I apologise deeply miss. This one’s head-″ he slapped the suddenly sober crewman “-is not in the right place once he drinks. Please, whatever punishment, if you insist, would be given to him.”

She brushed off the stains on her dirty dress. “Haul him overboard.”

He started in surprise and the other’s eyes widened in disbelief. “What?” he laughed uncomfortably. “I don’t think I heard you well Miss.” the first mate repeated.

She looked at him unblinking. “I said you should haul him overboard. Like useless cargo. You were paid in gold to inform your man about this and you failed. Unfortunately I do not have a forgiving heart. Throw him into the sea, that is what would pacify me.”

“Or, you could do it instead of him. I want someone gone." Guy, preferably, but she could settle.

“What is your name?”

“Fin” he chattered in fear.

“Fin. Fin- how fitting, I am simply doing you a favour. You belong to the sea. With fish, Fin. Do your man a favour and do it yourself. Or you could push him. However, if I wake up tomorrow to see both of you, Lord Guy would be very, very angry.”

She gave her dirty gown one more brush and marched out. ]

Uncivil English fools that wouldn’t keep their bloody hands to themselves. They deserved death. They all did.

Well, that was her mission, wasn’t it? How exciting.

Pps; if you enjoyed please leave a comment and vote too! It put this book out there. thanks.

aduerr46: Some of the stories must be written as a separate book

Baggie Keay: DEFINITELY the best so far..... also the longest but just bloody fabulous! I don't mind the cliffhanger because I am about to start book 7. I'm selfishly hoping you have almost finished book 8..... yeah I know, but a girl can dream can't she? Yet again a very well written and edited story that...

ErweGo: Absolute addiction. I stumbled upon this app on accident and kid u not i wasnt that optimistic until i found this gut-wrenching, heart-melting, roller coaster of a story. It's not hyperbolic nor metaphoric when I tell you that you.cannot.put.this.down.no.matter.what. Try it. YOu cannot. I bet you...

Noshi: Perfect end with a new twist with Cassie and Noah's kids in the next books !! Excited!! 🤗 🤗

Read Now
Pregnant by My Enemy by Hopeless Romantic

kessosiyoma3: I would recommend it to my girlfriend..we both loves reading novels and she also introduced some that she had read to me…I’m glad I came across yours 1st.

Cristal Bollinger: So good to read each story

Claire: The story plot was awesome and very anticipating