Amara Okeke would love your feedback! Got a few minutes to write a review?
Write a Review

Quick author note. You'll see the name "Kealen" in this chapter. I've changed the spelling so that it is pronounced *kee-lynn* The nickname is also Kee :)

I slowly brushed out my daughter's curly hair, after wetting it to make the bristles detangle it easier. She was sat in front of her mirror, watching me with her green, beautiful eyes while playing with her Barbie Doctor's clothes.

"Daddy? You look sad." She pouted.

I glanced at myself in the mirror, noting my puffy eyes and my downcast demeanor. I barely slept last night, and it showed. I sighed and placed the brush down on the dresser, carefully spinning the chair for her to face me.

"Dawn, listen." I cupped her cheeks and put on my best smile. "I'm okay. Right now, what you went through is my main concern. Your teacher said a horrible thing to you, so Dad and I will make sure she doesn't get away with it."

Her face morphed into a worried expression. "But... I-I don't want her to know I told. Please don't say anything."

"You have nothing to worry about. We'll take care of this, and you were very brave to tell us."

She just nodded as I kissed her forehead. "Okay, let's finish your hair. Your cousin's picking you up for dance."

I turned her chair back around and proceeded to add leave-in conditioner to her locks before putting it in a pretty bun.

"Your curls are beautiful," I complimented her. She smiled brightly at me and I knew that it meant a lot to her. There was a knock on the room door and we both looked toward it. Dani leaned against the frame with a smile.

"I'm sure David told you that we talked about the situation. I don't mean to insert myself—"

She bit her lip then approached me to take my hands. I didn't understand what she was trying to do at first, but she just squeezed them gently as if to say 'I'm here' and that alone sent me into tears. Jesus Christ. I felt like I'd done enough crying to last a lifetime.

"Why doesn't he believe that?" my eyebrows pulled together in a sad expression.

"I think he knows it too. Actually, I think he's hurt over something different, but you know how he bottles in his insecurities. He loves you. He wants to over-analyze this and look at every angle. Just answer his questions as truthfully as possible and it'll blow over in no time."

"If you really did hide anything from him though, then I'm sorry to say it but the only way he can understand is by digging deeper rather than taking your word for it. You know how he is."

I chewed the inside of my cheek, pushing down the emotions I felt rushing through me. Even though it stung, she was right, as usual.

"He doesn't trust me right now. I kinda get it. I got suspended from work and that's basically how he found out. I should've just been transparent. What was I thinking? I-I don't know what to do. I've loved him for a decade yet I have no idea how to get past this."

"I'm sure you will. You've been through a lot together. May I ask... How exactly did he get this notion that you might've cheated?"

I looked away as I recalled the embarrassing, regretful incident. "When I got suspended... I got into an argument with someone I thought was my friend." I shrugged sadly, fidgeting with my fingers. "It was pretty heated. Hurtful things were said and David overheard him flat-out calling me a cheater. I think he heard the whole thing actually, so..." I cleared my throat, not wanting to think about that awful day.

"That's awful. Did he stick up for you?"

"Yeah but he still thinks there might be truth to what my coworker said." I quickly changed the subject. "I'm just going to focus on Dawn. We're going to her school first thing Monday morning."

Kealen, Dawn's biological father, had moved to America years ago from Brazil and learned English all to be closer to her and communicate better with us. Of course, it was only fair that we made an effort to pick up Brazilian Portuguese, but she was fluent in it since he dedicated the time to teach her. So, our girl had three fathers and one mother, which we quickly came to be proud of. We felt it was important for her to know her parentage, so we all had an honest conversation with her to the best of her understanding.

Family was everything to us.

Speaking of family, my god-niece Athena arrived early with her car keys in one hand and a mini Louis Vuitton backpack hanging off her shoulder. She danced at the same studio as Dawn, so she decided to be her ride ever since she got her Dodge Challenger. She was practically our daughter, so of course she had our house key and was perfectly free to drop by whenever she desired.

"Someone looks dolled up today!" Dani doted. "I wonder what the occasion is. Hot new guy at the studio?"

Athena grimaced, smoothing down the flyaways of her long ponytail with her palm. "The guys there are all gross." She had a very musical, buttery voice that most would describe as soothing. "They talk to every other girl but me." She shrugged one shoulder with a devilish smirk. "I wonder why."

I smiled and hugged her. "They're intimidated by you, that's all. You're just in time for breakfast."

"Ooh, just as I hoped!" I followed her to the dining room where David had set the table and the natural light was pouring in perfectly.

"I thought I heard your sweet voice," David acknowledged Athena as she grinned.

"Yep, it's me. Hey, Royce-y baby! You helping Dad set up?" She kissed our little boy's head. He was busy holding out a spoon and a napkin toward the table.

"Thanks, love." David took the spoon and napkin from him before picking him up and sitting him in his chair. The rest of us sat down, and I secretly hoped Athena didn't catch onto any awkwardness or tension.

She did, however, perceive Dawn's sour mood.

Dawn looked at her mother unsurely.

"It's... hard to even say out loud," Dani answered the teen. "But one of her teachers told her something very hateful."

I heard David sigh, and I honestly wanted to do the same. Athena's bright eyes widened. "What happened?"

"Okay, scratch that. I see where this is going." She winced. "Please tell me I'm wrong, but did they say she can't play Dorothy because..."

"Because they're too close-minded to let a wonderful biracial child depict her? Precisely."

Dawn's shoulders fell, and she didn't seem too interested in breakfast anymore. I tapped my lap, asking if she wanted me to hold her. Without a moment of hesitation, she made her way into my arms and I propped her up. "Wait a second." Athena squeezed her eyes shut in disbelief. "Someone—no, a teacher actually underwent a thought process and you know, let it marinate in their brain for a minute, then opened their mouth, formed discriminatory words, and projected it onto another human being? Much less a child?"

"Unfortunately," David answered as he fed our son. "We're going to report the teacher."

"Who's the teacher? I went to Dawn's school when I was little; I might know who it is."

"If I remember correctly, she has red hair," I spoke up.

Athena snapped her fingers in remembrance. "And those God-awful glasses that don't fit her face!" She gasped then appeared confused. "Huh. That's such a shock though. I always thought she was one of the sweetest teachers. I mean, she absolutely adored my best friend, Paris, right? And Paris is mixed too."

"I've spoken to her a few times, and I thought she was nice." I shook my head in disappointment. "Obviously, that's just not the case."

"Well, you and I are gonna head to dance class then we'll go get some cotton candy to cheer you up. Deal?"

Dawn looked at her then nodded enthusiastically.

In the meantime, Royce had a doctor's appointment while the girls went to dance. After breakfast, I helped him put on his shoes. And it might seem trivial, but I loved doing so. I'd stoop down to his level to pick up his foot, and he would rest his tiny hands on my shoulders to keep himself balanced. It was the cutest little gesture and I couldn't help but to catch him in a surprise hug once I was done, sending him into a fit of laughter.

Afterward, we saw our two dancers off before I put Royce in his car seat.

"Casper," David called. "Are you driving or am I?"

Closing the back car door, I shrugged a shoulder without looking at him. "Whatever you want."

"Alright, that's my cue. I'll see you guys in a few hours." As Dani went to her car, David decided he would drive, so I sat in the passenger seat. Desperately, I turned on the radio but kept it a bit quiet.

"You slept in the guest room last night," David said after a few minutes of silence between us. It wasn't a question, but it sounded like a precedent to one.

"I did," I affirmed quietly. I had a clue what he might be thinking. It was a first for us since we married, sleeping in separate beds. This negative tension was a first in general, and I wanted to be rid of it forever.

"Casper... I'm sorry for last night. My words have been really harsh. I wasn't trying to make you feel—"

"Could we not do this here? Just not in front of..." I gestured toward our baby in the backseat and he nodded in understanding, but the gloom never left his face.

I rested my elbow on the door panel and gazed out the window for a few moments before scolding myself in my head. He said he was sorry, Casper. Twice. Just fucking go with it.

"Apology accepted," I calmly replied to him, still staring out the window. "We can talk more about it when we get back." I shifted in my seat, facing front with a sigh. "I should've stayed home."

I chewed the inside of my cheek, finding slight comfort in the scenery as he drove. I didn't want to admit that even though we were just going to a clinic, there would still be a host of doctors. It still looked and smelled like a hospital, which reminded me of my job... which reminded me of Avery. "I'm fine."

He glanced at me for less than a second before focusing on the road. I was no mind reader, but it was clear to the both of us that I was emotionally retreating. For a while now, I'd been slipping away from everything and everyone, and it took a suspension from work for me to finally realize it.

The outbursts, the secret-keeping, the fucking crying. My fog of depression was descending onto me after ten years of happiness and bliss, and there was no stopping it. 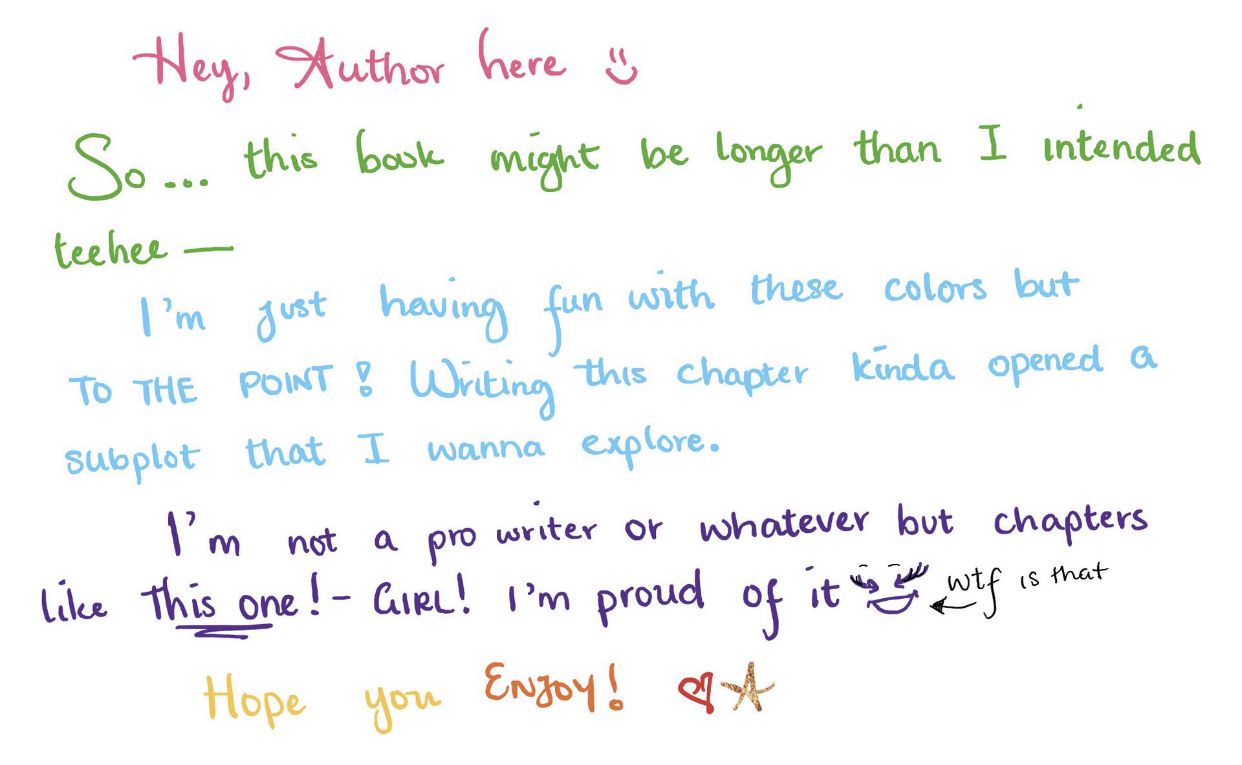