Denna Blackwell would love your feedback! Got a few minutes to write a review?
Write a Review 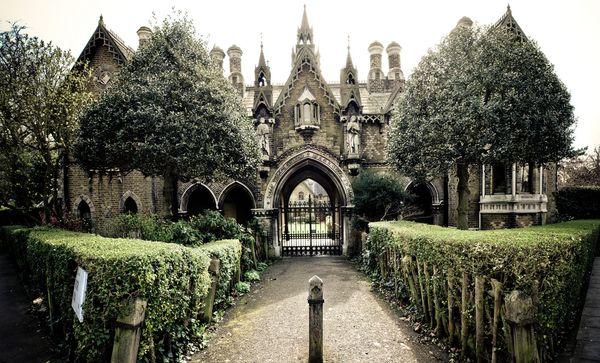 The driver leaves her in front of the intimidating gates. She hugs herself a little tighter, wrapping the red scarf around her neck to keep her teeth from chattering.

“Not so pleasant as I’d imagined, really.” The blonde girl looks at the black gates with wide eyes.

“You brought me with you for what exactly? My orientation day was for tomorrow.” She asks and helps carry some luggage on the cart.

“I’d trade you to Satan for two hot chocolates right now.” She tries not to curse at the cold weather.

They go in, accompanied by a silent, strict-looking, elderly woman who presented herself as Madam Fela, the Headmistress of the academy. Once they entered the driveway, a mansion looms in the distance amidst a forest and hills. Definitely the biggest monument she’s ever seen. And she’s seen a lot of things in in her young adult years.

They enter the luxurious establishment and are immediately ushered in with formality. She tries not to roll her eyes- she’s had her share of posh.

Her friend, Eline, however, is awed at the expensive tapestry, the glass chandeliers, the darkwood-covered walls and floors...

She scowls when she listens to the oh-so-snobbish classical Mozart playing through hidden speakers.

“Yes?” She looks at the strict, eagle-like woman.

“You’re to call me ma’am or Madam Fela. Was this not clear?”

She shakes her head with her practiced smile. “Of course, pardon my insolence Madam Fela. I was just struck by the immense beauty of this Matisse painting... 1867?” She nods towards the oil canvas on the wall.

Madam Fela gets appeased and softens. “Indeed. My most precious pieces are upstairs in my office. Follow me, please.”

Once there, she makes the two girls sit down. Eline is oozing with charm, being the perfect little puppet the head Mistress wishes to see. Estella on the other hand... short, cold responses, apprehensive and bored stances- all of which are not the qualities attributed to Blackwell Academy.

“How was your travel? My driver told me you don’t do well on planes.” Madam Fela stares at Estella with her grey eyes.

“It was fine, Madam.” She whispers, her mouth a tight line. She refrains from snapping at the woman. She’s not surprised the driver relayed information from their conversation.

“Here are your uniforms. Estella, it’s no mystery that you’re the youngest adult to be admitted here. You are to wear these like everybody else. Understood?”

She nods and takes the bundle of clothing from her.

“Madam, if I may be so bold as to ask...” Eline moves forward and sits even straighter than possible.

Does she not own a spine? She looks at her friend’s behaviour curiously.

“I was told everyone has their own schedule...”

“You’d be correct. They await in your rooms. Now, I’ve got a meeting to attend. It was a pleasure, girls. I look forward to see you again. Mr. Eckleberg will see to your chambers.”

Eline rises and curtsies in her white dress. She stands in turn, and nods to the old woman.

They follow Mr. Eckleberg, who turns out to be a professor himself at the academy.

“For submissives or dominants?” Eline continues flirting with him.

“I specialize in submissive etiquette, but I’m an overseer in all areas.” He looks behind him, and raises an eyebrow at her. His formal suit already pissed her off, and the way he talks like a pompous twat didn’t help her like him.

“Estella. You haven’t said a word, doll. Are you all right?”

“I’m perfectly fine. Thank you for your concern. Must be the jetlag.” She smiles and ignores his own promising smile.

She’s used to people underestimating her, wanting to toy with her for one reason or the other.

She doesn’t mind playing the careful game of S for S: Seduction-for-Survival.

After having walked for at least twenty minutes to get to the rooms while listening to Eline’s constant giggles and Mr. Eckleberg’s side glances, she was ready to punch something.

He coughs, “Here we are. Ladies, Room 142, Estella’s Lair. Room 141, Eline’s Lair. Welcome to your humble abodes. Dinner will be at the main cafeteria at 8 o’clock sharp. Do not be late. Follow the golden plaques on the upper left corners.” He combs his gelled blond hair back and leaves.

Before he goes down the ancient, spiralling stairs, he turns to them one last time, making his black suit swish with him.

“Oh, and please wear your uniforms.” He smirks and finally disappears.

“Jeez. What a creep.” She mutters against her door. She places her finger on the touchscreen and the door swings open.

“You’re being so rude, Este! How can you think that? He’s so... hot.” Eline breathes in wonder.

She opened the door, and see the room is not a ‘room’, but rather a private suite. Enormous everythings; baths, shower, bed, salon, office, TV room...

“Holy shit this is insane...” She mutters under her breath. She ignores her friend’s neighbouring squeals and searches the rooms to find her luggage and clothes already sorted in the cabinets.

She frowns when she sees the one belonging she treasures on her bed already.

She grabs the small, stuffed crocodile and cradles it against her chest, examining his bright, green fur thoroughly. She kisses its soft head and curses whoever touched him without her permission.

She’s not materialistic. Far from it, she couldn’t care less about jewellery, clothing or status.

But that stuffed animal means everything to her.

“Wish me luck, Draccus!” She says and tucks him in before going to the front of the bed.

“Fuck me.” She exclaims when she sees the uniform. “I hate skirts.” She frowns at the fabric - or lack of. It reminds her of her old uniform in high school.

“Wonderful.” She takes her laptop out to play some music to cover that obnoxious classical bullshit, and puts on the uniform.

Kushina_Uzumaki: well it very pretty writing style I really want to buy the book on amazon and it makes me be happy when I read this book

ntulinosipho33: I loved everything about the story including the moral of treating everyone fairly

Scharolette: It's a great book, I would love to read some more works like this one. Keep up the good work!

CocoLulu: Its a great story, but the grammar is off sometimes. They don't use new lines when someone new speaks, so its can sometimes be difficult to tell who's speaking.

Michelle Johnson: I love the story! I can’t wait to read more. I hope you feel better soon! Your Heath is important!

Ashley Girard: Wow. Didn't see the While witch twist. Nice. Love it. Can't wait to find out the rest. This series is so good. Keeps you Interested.

lolli63pop: I love ALL of it. The plot characters dialog All of it. Very minor spelling errors noted, but I am sure others have already said it. Loving it

feliciana362: I like it all so far and I would recommend it to everyone. It is so interesting and I cant wait to finish it

Denise: Book is getting better

Denise: Love it so far