“Would you like some tea?” My mother asks as she dances around my kitchen with Aiden’s mom.

“Sure.” I say as I glance at Aiden awkwardly, he gives me a weak smile as our fathers sit down on the chairs opposite us.

“So how was the vacation?” Aiden asks feigning joy.

“Do you seriously expect us to talk about the vacation after what we just saw?” My dad says with clear amusement, that made me want to crawl in a hole. I think your fathers catching you and your.....what ever Aiden was to me, making out in the hallway with him ripping your clothes off was probably the most embarrassing thing that could happen to you. I just thank Goddess our mothers were still in the car and didn’t see.

“Yes I do and I expect you to forget what you saw.” I say seriously hoping to Goddess they don’t see the panic that was running through my body.

“Okay.” Micheal whispers as our mothers come back smiling widely with cake and drinks, although my mom kept giving Aiden a death glare, strange...

“So how was the vacation?” Aiden asks again.

“Amazing! We went all over Europe, saw all the big sights and everything. They’re surprisingly a lot of people who spoke English, we got lost a few times but it was fun anyway.” My mother rambles on while the others snicker at the mention of getting lost.

“That’s great.” Aiden says sarcastically, I’ve been with the guy long enough to know he was angry that we didn’t get to finish what we started in the woods.

“They’re doing excellent, very close.” My father stretches, I shoot him a glare before returning my attention to my confused mom.

“We’re doing fine mother, a few bumps but we’re actually....” I glance quickly at a smiling Aiden. “...happy.” I finish making our mothers and surprisingly, fathers, coo, I really wanted to kiss Aiden but our parents reactions wasn’t something I wanted or needed.

“Well we’d love to chat some more, but we actually have to move into Julian’s suite today so we should be going.” Aiden says feigning sadness, our parents nod before giving us hugs and words of encouragement then leave. We both let out exhausted breaths, glancing at each other before breaking out into fits of laughter.

“I’m going to clear the fridge and cupboards, pack a bag with your stuff and mine please.” I say stretching a little, before I can walk away he grabs my wrist twisting me towards him.

“You said please.” He says with a growing smile while I watch him completely confused.

“Yeah...” I say narrowing my eyes. “I’ll just go now.” I say snatching my wrist away from his as I back away from his still smiling form. Deciding to ignore it I head to the kitchen, it doesn’t take me long to finish so I head up to the room to see if Aiden’s finished.

“Hey, what ever happened to your car?” He asks as soon as I enter the room.

“I sold it.” I say with a shrug, leaning against the doorframe. “You almost done?”

“I am done.” He replies while slinging a large bag over his shoulder. “Can you get the others?”

“Yeah.” I say as I pick up the smaller ones that had our school supplies and pack information. When we get to the kitchen, he takes the bags with the food and we head out without a second glance. I liked it here but my suite was much better, so I would be lying if I said I wasn’t more than happy to go.

“If we make an extra wing we’d have more space on the upper floors.” I say as I circle the area.

“Yeah but then we’d need more bathrooms to accommodate for all those people.” Aiden replies as his eyes study the blue prints.

“We have money to do that, our packs are rich, it’ll just set back the construction time by about a week.”

“Okay you’re right, I’ll let Felix know in the morning.” He replies relaxing a bit as I roll up the blue prints. “Want to order Chinese?”

“Sure, all I ask for is the sweet noodles that everyone loves.” I say with a wide smile.

“I know the one.” He replies picking up the phone in the office, I hadn’t had a chance to bath since the run so I snuck out the room and headed for the bathroom.

“Shower or bath..” I question myself as I look at the glorious jacuzzi, bathtub and shower. “Chinese will take a while...so bath.” 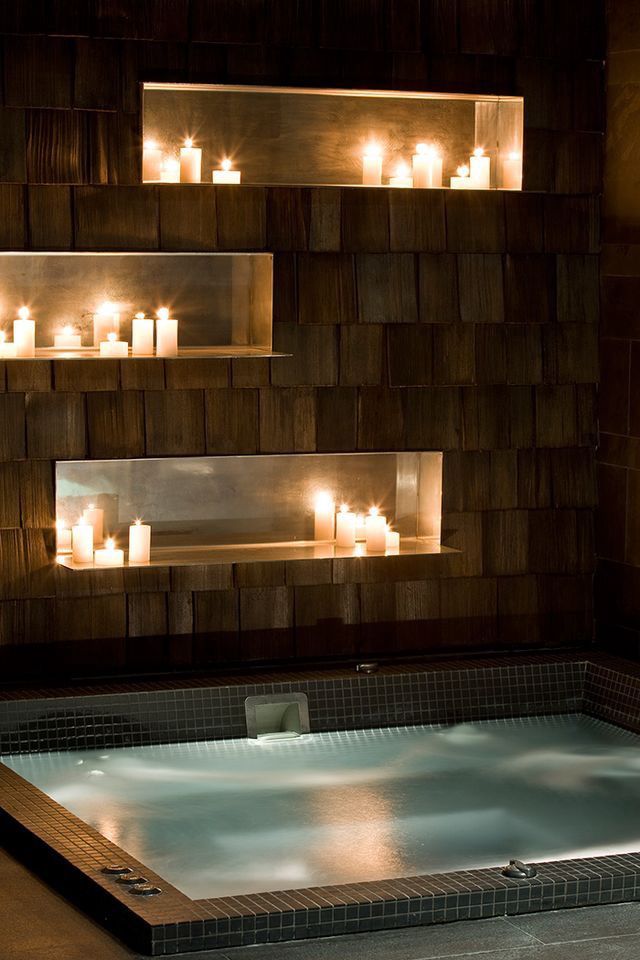 Picture of jacuzzi, imagine everything in white and I guess candles are there if you want them to be.

I fill up the jacuzzi before sliding in, letting out a satisfied breath as I sink in stopping at my neck. I close my eyes enjoying the steaming water that put me in a state of pure bliss. After a while, I let my childish needs take over as I put on the jets and play discreetly with the bubbles it made. I was always easily amused by them, who doesn’t love bubbles?

“You’ve been in there a while.” The voice makes me jump as I instantly sink my hands back into the water.

“Yeah just taking a bath.” I reply thanking Goddess he stayed behind the door and didn’t walk in.

“Mind if I join you?” He asks the smirk on his lips completely audible, I feel my cheeks heat up at the offer but I blame the water and only the water.

“Sure.” I say so quietly I hoped he wouldn’t hear, but he did as he walked in slowly. My eyes stayed trained on him as he took off his shirt revealing those mouthwatering abs that made my heart flutter a bit, when he went to his pants I turned away still a little uncomfortable. I turn back when I feel him sink into the water, he stayed on the side opposite from me as he extended his arms along the sides of the tile boarder. Never before have I loved bubbles so much for hiding what I wanted to stayed hidden.

“So when is the Chinese coming?” I ask trying to start conversation before the awkward silence could form.

“It’s already here.” He says picking up some bubbles in his hand studying them a bit before glancing my way again. “I just wanted to bathe with you.”

“Okay...” I say sinking my head into the water, up to my eyes to hide the color that just flooded it’s way into my cheeks. I rise back up when Aiden takes off the jets making the water settle and the bubbles slowly disperse. “Why’d you take them off?” I ask shifting a bit in my spot, now sitting up straight as he slowly made his way over to me.

“They were in the way.” He says stopping right in the middle before taking my hand and pulling me towards him. My head instantly went down but shoot right back up when my eyes saw through the water, I stare into his eyes with panicking ones. He sinks back down taking me with him, instinctually I wrap my legs around his waist as I rest my hands on his shoulders.

“Hi.” I say awkwardly not breaking the eye contact.

“Hey.” He says with a smile that surprisingly relaxes me, resting my head on his chest I inhale his scent deeply.

“Aiden what are we?” I ask sitting back up after a while as he uses his arms around my waist to keep me close. “I know we’re mates but besides that, what are we?” He looks at me with wide eyes before he plunges deep into thought.

“I don’t know.” He replies looking back at me with a smile which seemed to be something he was always doing now. “We’re us I guess.”

“Us?” I repeat as I move the hair out of his face.

“Yeah us, can’t be confined by a word.” He says sounding way to Tumblr for my liking.

“Technically by saying that we are ‘us’, you are confining us into a word.” I say making him frown.

“I understand what you were trying to say, so thank you.” I reply taking his lips into my own, sending those electrifying currents through my body. I smile against his lips as I relish in the feeling of being with him so closely.

I don’t think I’ll ever be as happy as I am now.

---------------
A lot of shit happened last night for me, I found out some stuff that made my trust issues rocket sky high. Then like if that wasn’t enough, my brother’s was in the hospital.
I’m not in the best place right now, so if updates become choppy. Excuse me for a while.

Thanks for voting and commenting and reading, love you all.