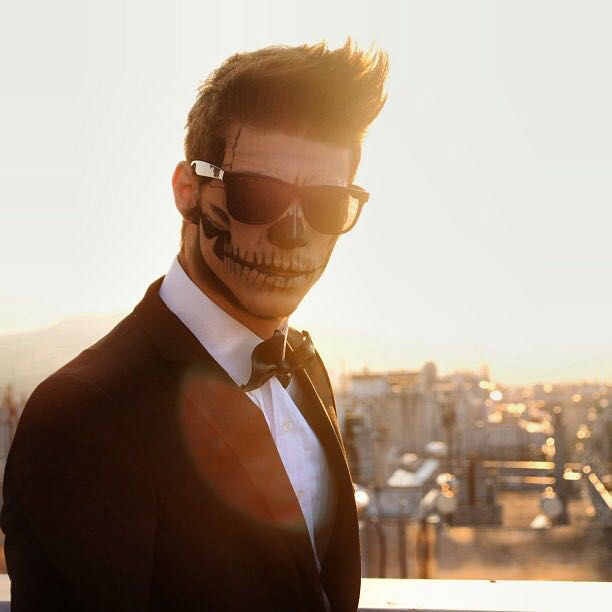 “You can’t be serious.” I strain as I look at Isabel twirling away in the mirror.

“You’re going to lose so many friends.” Julian says in agreement folding his arms as he eyes her.

“That would imply that I had friends.” She replies with a devious grin. “Witches don’t get to claim witch costumes.”

“They kind of do, seeing as they are witches. They’ll think of this as offensive.” Julian says but she just waves him off.

“Not my problem.” She says ignoring us, when she sees we weren’t going to let up she groans loudly before grabbing a bag and disappearing into one of our rooms.
Not too long after she returns with straightened hair and a lot more makeup, wearing an Egyptian outfit.

“Nefertiti.” She says with a sigh. “Let’s go.” She says grabbing her stuff running to the elevator. Once on the bottom floor she claims shotgun and dashes away before we even stepped out.

“So what are we exactly?” Julian asks playing with the ends of his shirt.

“I don’t know really, I saw it online and it looked cool.” I reply with a shrug. “Do you hate it or something?”

“It was a shock at first, but it’s growing on me.” He replies simply as he slides into the back seat while I start up the car.

“You have the directions right?” I ask Isabel when I pull the car out the new pack house.

“Yep.” She says before turning around to face Julian. “Some party rules.”

“Shouldn’t he live and then learn.” I say kind of wanting to see a drunk Julian.

“I guess but this is Julian, we can’t let him go in blind.” She says while pointing me in the direction I needed to turn.

“Fine. Rule number one, don’t eat the food.” I say watching him in the reverie mirror.

“What’s wrong with the food?” He asks with narrowing eyes.

“Do you go to a party to eat? No. So why is there food? Something’s in it or its stale, leave that shit alone.” Isabel fills in, I nod my head in agreement as she continues. “Rule number two, don’t exceed your fuck it drink if all your friends are drunk.”

“Fuck it drink?” He asks in confusion as Isabel points me down another turn.

“That drink that you know if you take it there’s no coming back, like all bets are off, when you take that drink everything goes to shit right after.” I explain.

“I don’t know mine.” He says nervously.

“Well we’ll find it out tonight.” Isabel says laughing making Julian gulp. Not too long after we pull up to the mansion that was overflowing with people. “Are you ready kids?”

“Wait, what about the other rules?!” Julian says in a panic as we get out the car.

“Okay.” He replies taking a deep breath as he straightens my bow tie. “This oddly suits you.”

“And you.” I say lifting his chin before kissing him. I swear the feeling of his soft lips against my own could send me mad with pleasure, it made my entire body come to life as our mouths moved in sync. The sudden flash of a camera makes us break apart as we turn to see Isabel smiling widely with her phone in her hand.

“My new lock screen, home screen, laptop wallpaper and I’ll print a physical copy for the kids.” She says dancing on her toes.

“Yes your kids, I’ll be an amazing aunt.” She says as she gazes away at absolutely nothing. We just laugh as we start walking but I couldn’t help but let my mind wander a little about kids. It was kind of in the job description for Alphas to have kids but I guess I forgot about it. But we’re both guys so would we adopt, but they’d need our genes. I shouldn’t be worrying so much I haven’t even finished school yet.

“Are you okay?” Julian says tugging on my arm as we approach the front door, passing people on the lawn. Most drinking and climbing in the trees, one guy was dancing with a blown up zebra.

“Yeah. Let’s have some fun.” I reply sliding my hand into his as Isabel opens the front door.

My eyes immediately light up as I look around the packed house. The music drowned out the talking as some people were dancing like usually while others played beer pong or lounges around talking loudly with beers surrounding them. Some idiots were sliding down the steps on food covers while others were flipping into the pool outside.

“Drinks!” Isabel exclaims as she pushes her way to the drinks table with us following close behind. It was more like a small bar area that was left unattended.

“Are you a vodka man or a beer man?” I ask turning to Julian, the look he gives me tells me more than enough. “Beer it is.” I say passing him a beer before pouring myself a cup of straight vodka.

“My goddess, are you Russian?!” Isabel explains watching me with bulging eyes making me laugh as I take a swing of the liquid.
She takes both Julian’s and I’s arms, linking them with her own before leading us proudly through the crowd like we were her’s.

“Really Rachel? A witch?” She says passing a girl who immediately starts checking her outfit.

“Your sick.” Julian mutters from her other side making her laugh like a mad scientist.

“Guys! Over here!” My eyes search through the crowd landing on an ecstatic Emit who was jumping around for us to get his attention. We make our way over to find Beckett along with some other people. “You guys look sickly amazing.” He says making me smile proudly as he sits back down next to Beckett. I immediately sit in a free arm chair as Isabel lays herself down on some twins with a welcoming smile.

To my surprise, Julian sits in my lap, sliding his arms right arm around my shoulder as my own went around his waist pulling him closer to me. I buried my nose into his neck, allowing myself to drown in his addictive scent and comforting warmth.

“Who is that sexy thing?” One of my friends Russell asks referring to Julian making me growl as Max begs me to rip his throat out.

“That’s Julian.” Isabel saying twirling her finger in one of the twins hair, while Julian presses a hand against my chest to calm me down.

“Holy shit! When did that happen?” Russell exclaims watching us in confusion, as my eyes still glow with anger behind my shades. Naturally he’d be surprise since he was human, but then again we were together almost always nowadays so he really shouldn’t be.

“Where the fuck have you been?” My other friend Crystal says sipping her cup. “If you raised your eyes from girls’ asses every once in a while, you might have noticed.”

“My eyes may stay below for other girls, but for you sweetheart, they stay above the surface.” He replies staring blatantly at her boobs.

“Anybody has a shunt? I need to kill this wannabe fuck boy.” She says loudly looking at Russell in disgust.

“I know you want me mamacita.” He says scouting closer to her.

“I rather cut off my own toes.” She replies before pushing him away.

“Your friends are weird?” Julian whispers to me as they continue to talk.

“They’re not for everybody.” I say with a smile as he looks around the packed house. “Not what you imagined?”

“Nope.” He answers truthfully. “I expected a dwarf running around naked while someone jumped off the roof and some other guy rode in on a horse.”

“It gets crazy every once in a wild but all you need to have an insane night is a group of borderline crazy friends and alcohol. Everything else will unfold from there.” I explain as he looks down at me skeptically.

“What happened to the truth part?” Julian asks unconsciously running his fingers through my hair, I secretly relish in the feeling that sent mouthwatering shockwaves throughout my body.

“Better without that boring bitch.” Crystal mutters before chugging her bottle of beer and resting it on the table. Without needing any sort of explanation, we start the game with her spinning the bottle. The top side lands on Beckett and the bottom on some random, making Beckett the one to be dared.

“Drink water from the toilet bowl.” He says with a smirk making everyone groan in disgust. Julian covers his mouth, gagging a bit as he leans on me, I rub his back comfortingly as I mentally vomit.

Some follow behind Beckett and the boy as they go to witness the dare being performed, but Julian and I stay among those too disgusted to go.

“Drink up.” Isabel says handing us some beers she went for in the meantime before retaking her seat with the clearly happy twins.

“Stop!” Julian exclaims pulling the beer bottle out of my mouth when I start chugging the slightly foamed liquid.

“What’s your problem?” I ask coughing a little making his eyes fill with regret.

“Sorry but what if she drugged them?” He whispers harshly making my eyebrows knit together, weren’t they friends?

“I highly doubt Isabel put Ecstasy in our drinks.” I say grabbing my bottle back. “If anything she’d put Viagra in it.”

“How’d you know?” She asks sitting up dramatically from her position.

“Very funny.” I say as she watches me blankly for a while before snapping out if it.

---
A couple hundred dares lately with a beyond gone Emitt and slightly tipsy Crystal we were still going. Julian was still hanging on which made me strangely mad.

“Both of you have to make out with Izzy.” Emitt instructs the twins, I swear the girl almost cried as she placed her hand on her heart and nods towards the boy.

The twins didn’t seem to mind as they both turned to face her with wide smiles, I watch with a slightly proud gaze as Isabel literally milked those guys’ lips for all they were worth. Leaving them with swollen lips and tinted cheeks as she strolled away proudly, they scrabble to their feet as they run after her making Julian giggle.

“Having fun?” I ask him quietly.

“Surprisingly yes.” He says smiling down on me with his sparkling eyes.

“No. No. No. No.” he reiterates strongly as I stand up taking him with me.

“Come on. It’ll be fun.” I say pulling his hand but he stands his ground firmly.

“No it will not.” He says clearly not on board.

“You’re too sober.” I whisper to myself. “Drinks then.” He nods slightly as we make our way to the table again. Instead of handing him a beer, I mix up what a lot of people came to know as my Knockout Concoction.

“What happened to beer?” He asks cautiously examining the cup.

“You out grew it. Drink up.” I say as he lifts the cup to his mouth. His eyes widen as he drinks it slowly, I tip the bottom of the cup forcing him to drink more.

This is going to be so fucking amazing.

Thoughts? Did ya like???
Vote up if you did and share so the book can take over the entire planet. Hehe