Faym413 would love your feedback! Got a few minutes to write a review?
Write a Review

Later that night, Colby and I were on the second deck as we were met by Noah coming down the stairs from the top deck. 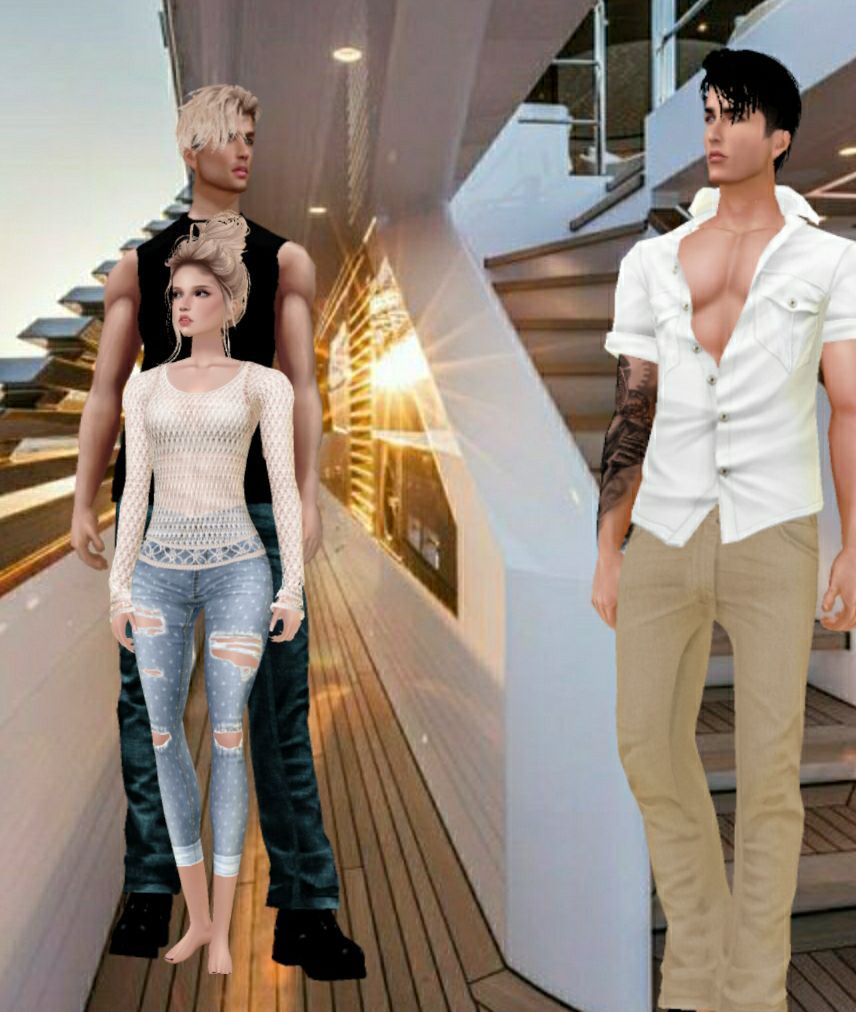 “Speaking of doing stupid things.” Colby said under his breath and I jabbed him in the ribs.

“Yes, he stares at you all the time, I’m a guy. I notice these things.” Colby whispered, “He likes you, but I don’t know what his issue is and it’s getting under my skin.”

“Just leave it.” I hissed back, “He’s only around for the wedding, then we’re done with him.”

“Somehow I don’t think that’s the case.” I grumbled, “He just likes to teSe me.”

When Noah spotted us his eyebrows shot up.

“You do realize that she’s on a boat? In the middle of the ocean, right?” Noah examined Colby, “She’s safe, with her family.”

“You do realize that my job is for her protection, right?” Colby chuckled, “It doesn’t matter where.”

“I happen to think Arlee can take care of herself just fine.” Noah crossed his arms.

“As long as I’m paid I’ll be here.” Colby stood tense, ready for anything.

“Why are you really here?” Noah asked, stepping into Colby’s face, “What exactly do you get for taking care of Arlee?”

“A paycheck.” Colby ground out and pushed me along.

“Hey! It’s Alree!” Chloe yelped when I came around the corner. She had to be three sheets already.

“You look super cute tonight.” She stumbled toward me, checking out my outfit, “How do you always look so cute?”

“Come sit with us.” She grabbed my hand and pulled me toward all the giggling girls.

“So, tell us!” Gina leaned forward, her drink in hand as she whispered loudly, “What is it with the hunky bodyguard? Is he guarding everything?”

She wagged her eyebrows at me and I couldn’t help but laugh.

“Colby? He’s my friend.” I smiled at Colby, who could obviously hear us.

“You do realize that if you sleep with him, your paying for sex, right?” Chloe laughed.

“Well, technically her parents would be.” June surprised me by joining in, “Right Colby?”

“Not if it’s my night off.” He winked at June and walked away as the girls giggled.

I knew he was joking, to get a rise out of them it worked, Gina was fanning herself.

“Have a drink.” Noah stood over me, handing me a cup that looked like soda as he drank out of his, not making eye contact.

“What’s this?” I looked into the cup.

“It’s a mixed drink, Ace.” He gave a nod, still not looking at me, “I didn’t think you were a drinker, so I wanted to make sure it was a light one.”

“Um, thanks.” I took from him and he gave a nod and walked away.

“That was odd.” Gina glared after him.

“Yeah.” I gave a nod, but sipped at my drink. It was light, but just strong enough that I could taste the alcohol. That was nice of him.

“So, what about Ethan over there?” Chloe pointed to where the guys were around the table.

“You didn’t-?” Chloe left it hanging, but June caught on.

“No! Eww!” I scrunched my face in disgust.

“Well, at least Noah won’t spend another three hours in the gym tonight, thinking your sleeping with these guys.” Chloe laughed.

“What does her sexlife have to do with Noah?” June asked.

“Please, Noah is pining after her hardcore.” Gina scoffed.

“He’s like a sad little puppy. “Where’s Arlee?” “Is Arlee coming?” “Have you heard from Alree?” And then he stares at you. Like, all the time.” Chloe rolled her eyes.

“Well, he blew his chances.” I shrugged, “You don’t tell someone you like them and want them to be your girlfriend, then take it back and screw Summer Evans.”

“But Noah said the whole thing with Summer was because he was trying to prove to Ian that he could leave you alone or something like that.” Chloe shook her head.

“What?” My brow furrowed at her.

“I don’t know exactly what it was,” She scrunched her face at me, “But what I got from it was that the thing with Summer had to do with Ian. Ian told him to back off you or something.”

“Have you looked at Noah? Like really looked at him?” Gina asked, “The boy is intense. He tries not to be like his dad, but he’s exactly like him. Think about it. He met a girl he liked and wanted to turn her to the dark side, just like his dad did with Bree.”

She sipped her drink and cringed, probably because it was too strong.

“I’m not catching on here.” I told them, “Noah led me on, he and I became friends. I talked about stuff with him that I’d never told anyone and he turned around and slept with someone because I wouldn’t put out.”

“It has to be Ian.” June whispered, “The way Noah always watches you? He does like you. A lot.”

“I’m pretty sure it was Ian.” Chloe whined, “I’m out of vodka. Anyone else need more?” She looked around and hopped up, going over to where the guts were.

Well then, I would find time to talk to Ian and it looked like it was coming as he walked toward us.

“Did I hear my name?” He plopped down next to me and put his arm around me.

“You did actually.” I glared at him, “Did you tell Noah to stay away from me?”

“What?” He gave me a double take, that if I hadnt been so pissed I would have laughed at.

“Don’t repeat his name.” He put a finger to his lips, cutting me off, “Speak of the devil and he shall appear. Yes. I told him to back off.”

“Why would you do that? You know they like eachother!” Gina hissed.

“Look, Noah’s into some nasty shit when it comes to chicks and I saw him warming to Arlee and she ain’t that type. That’s all.” He shrugged, like it was nothing.

“You know Noah’s not into anything nasty.” Gina hissed again.

“Bullshit.” Ian pointed at her, “Guys talk, you know.”

“Geeze.” He cringed, “He likes to brainwash chicks and beat ’em and shit.”

“Liar. Noah’s not like that.” Gina shook her head, “He’s too even tempered.”

“Bullshit,” He chuckled, leaning back against the cusions and running a hand over his face, “He’s a controling prick in the sack and beats women. You should hear some of the shit I’ve heard.”

My eyes locked onto Noah’s from accross the patio and I chugged my drink.

“Not Noah.” I told him. I couldn’t believe he was like that.

“I’m serious Arlee. He’s not for you. He likes to brainwash women into doing the nasty shit he’s into.” He scoffed, “It helps his temper, or else he’d be a dick like good ole Uncle Ash was when Aunt Bree was out of the picture.”

“What kind of stuff is he into?” Gina grinned.

“He’s into tying them up, getting all kink and hitting them and shit,” He shrugged, “What else is there to know?”

“Fucking control freak, like his old man.” He scoffed into his drink.

From what I knew of Noah, he never wanted to be like his father. He had once told me that he had his outlets for his anger, but wouldn’t elaborate.

I swallowed hard, thinking about what Ian had just said and wondering if that was why Noah had pushed me away.

“Brought you another drink.” Noah was in front of me again, handing me another drink and Gina smiled knowingly up at him as I took the drink with a shaky hand.

“Thank you.” I mumbled into the cup, taking another swig.

“Okay, I can see it now.” Gina examined her cousin as he stood in front of me and began to nod.

“Noah, I think we need to talk.” I watched him wide eyed.

His eyes shot to Ian, as Ian began to snort with laughter himself, then moved back to me and he gave a nod.

“Tomorrow.” He took a swig of his drink, “When we’re sober.”

His order caused both Gina and June to snicker, but my heart was breaking.

It couldn’t be true.