Mind Of Meesha would love your feedback! Got a few minutes to write a review?
Write a Review

Rubie had mentioned mother and human nature, but no one could ever describe the nature of the woman in the second room of Mystic Manor. It was overwhelmingly calm and light, the temperature settled into a comforting, caressing indoor breeze, dark puffs of smoke like faded streamers in the air, looming above the steps to their left, leading to a wall and seemingly no exit, and the floor seat where the young woman was sitting at the end of the small stretch of the room.

The girl’s hair was a light, creamy shade of white, long and straight t her ribs, shielding the sides of her face. Her pupils were pure white, blank but deep and hypnotic, irises a pale lavender. Her smokey purple dress ruffled down to her ankles and the skin of her arms was marked with unusual black swirls and outlandish symbols, her lips damp and dripping crimson liquid. A silver metal wine glass was at her side, the same coloured liquid filling it to the brim, looking practically untouched. The whole thing would look almost vampiric to anyone but Amber and Cressela, who knew that this was a lot different and more complicated than fictional beasts ever could be.

And on the marble wall behind her was one word written in scarlet, the letters’ colour trickling slowly down the surface, leaving bold trails in their wake.

Cressela seemed almost relieved by her presence, going over to her with no hesitation and a small smile. 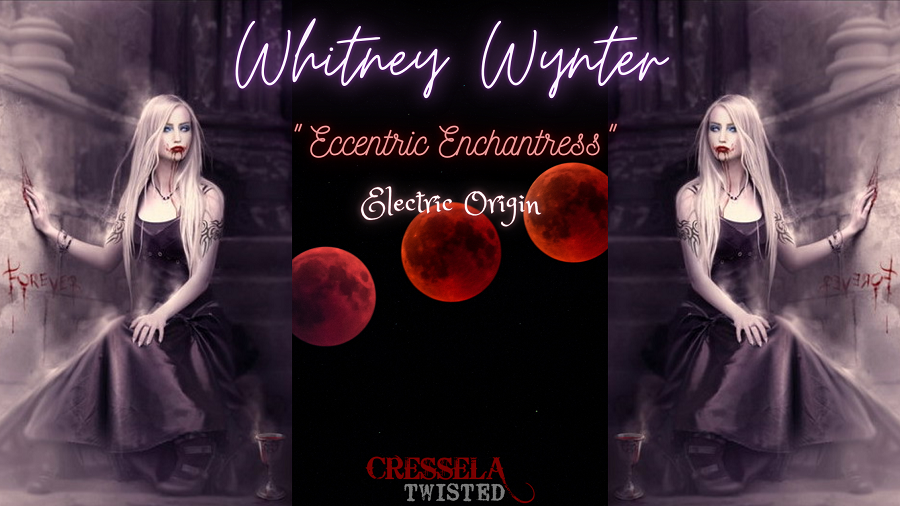 Whitney nodded slowly, giving her a soft smile back. “Cressela. It’s good to see you too. The last living Katarina. I’m sorry for your losses.”

Cressela’s grey gaze shifted to the ground, then back up at her with a silent nod. Amber frowned in confusion and curiosity.

“How did you know that?” she found herself whispering, and Whitney’s eyes glided to meet Amber’s.

“I know many things,” Whitney responded. “I’ve discovered immeasurable revelations. The answers expose themselves... when you expose yourself to them, Obscura.”

Amber’s gold stare widened a fraction. “Are you... how- are you reading my mind?”

Whitney smiled and shook her head. “Not on this planet. But I don’t need to. Kyria works in many ways,” she continued, looking at the cup on the ground, “but, even with this world’s limitations, its purpose remains.”

“Looks can be deceiving,” Whitney replied. “But, like blood, it awakens your senses. Loans you glimpses of what’s hidden. And I know that’s why you’re here, Obscura. I know that your search for answers brought you to Cressela here, and to us. To where everything started. Long before Insanis.”

Amber’s eyes were fixed on Whitney, studying her, trying to see what she was seeing behind her calm, soft but deep gaze, her enticing, enchanting presence. Amber paused for a long moment before collecting her thoughts and forming them into a question she didn’t know she wanted the answer to.

Whitney let out a deep breath, a thoughtful expression on her face. “I find it interesting... that parents tend to have so much influence over their children’s lives. Some are orphans, and so they learn to be independent, yet they can’t help themselves from thinking about who it was that brought them to this world all that time ago. Neglect resulting in attention-seeking. Love resulting in compassion. And when we were brought to the wrong world? We lead ourselves to the right one... along with those who were torn from it.”

Silence hovered in the air for a moment, Cressela’s eyes shifting to Amber. Amber nodded slowly, taking in her words.

“You won’t tell me everything, will you?” Amber concluded with a small smile. “You want me to find out. But how?”

“How do you think, Obscura? If it brought you here, then, well, you’re in the right place. But the answers we find aren’t always what we want to hear. Especially when it’s the truth. And I know as much as you do,” Whitney added earnestly, “but I know the one who knows most.”

“Insanis,” Cressela whispered, and Amber glanced at her, nodding again.

“Insanis,” she repeated. “That’s exactly who we’re here to see.”

“Of course it is,” Whitney agreed with a smile. “And who am I to stop you? But for you to gain something, I have to lose something too. Take the Kyria,” she said, picking up the cup carefully and handing it to Amber, who took it in both hands and looked down at her smudged, red-stained reflection in curiosity, “to the night.”

“To the night?” Amber asked in confusion, and Cressela gasped in recognition.

“Level Five,” Whitney confirmed. “The Night Narrows. It tends a little... bitter when you reach the gateway to Level Six. But then you’ll be on the last lair, once you’ve reached the Delusional Domain on Level Seven. You’ve done it once, Obscura. You can do it again.”

“The answers are waiting for you,” Whitney gently interrupted, “but not here. Go. Cressela, it’s good to see your face again. And your first name is...”

“It matches your eyes,” Whitney commented. “I’ve heard that people on this world say that the eyes are the window to the soul.”

“Shakespeare,” Amber told her with a half-smile. “Famous playwriter.”

“People often write about what they cannot do. Flecks of their personality in the characters’. But you can, Amber. So go.”

Amber nodded, Cressela smiling at her gratefully, and the two backed up and moved to the wall, unsure of what to do. Whitney stayed silent, and Amber’s brows furrowed as she studied the blank surface, then pushed her palm onto it. The wall gave in as easily as a door, parting into two and swinging open to reveal pitch-black darkness. Amber thought back to the room in Cressela’s house, waking up there, dropping the crowbar, and bit her lip, glancing at Cressela herself.

“You’re as light as air,” Whitney called to them, “but it won’t give you the trust you’ll need to take that leap of faith.”

Amber nodded, offering her hand, then hesitating, uncertain if Cressela was comfortable enough with contact. But Cressela took it after a moment, cool, soft hand in hers, and then their feet were off the ground, the plummeting Amber half-expected never slapping her senses and sending a shooting rush of adrenaline through her veins. Instead, they hovered in the air, then slowly, slowly, floated down to a ground they couldn’t see, the darkness so thick it was hard for Amber to tell whether or not her eyes were actually open. She let the sensation of being weightless wash over her, gravity going easy on her, gently dropping her to soft ground, the light hold of it all letting go. A distant humming noise was the only sound breaking the silence in the Night Narrows, like thin, delicate wings beating from somewhere around them. A crackle, and frothing ignition, then light pierced through the darkness as Cressela struck a small bolt of lightning from her fingers.

The humming stopped, and light footsteps suddenly met the ground, approaching them eagerly.

“Cressela? Is that really you?” a quiet girl’s voice asked in seeming disbelief. A figure was outlined by the light - a girl with midnight hair to her neck, and glowing green eyes, the brightest Amber had seen yet. There were what looked like wings folded and quivering a little by her sides, black and thickly webbed and frail.

Cressela nodded and smiled, and Natalia smiled back, rushing forwards to embrace her tightly. Natalia sighed, her expression mixed with sadness and relief, but then they met Amber’s. Natalia stepped away from Cressela, looking to Amber in expectation and mild interest.