RudiLejaeghere would love your feedback! Got a few minutes to write a review?
Write a Review

The Woman in Red: 1. The dance 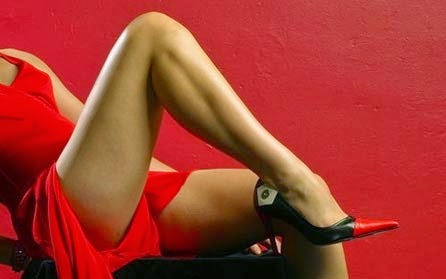 She was undoubtedly the most beautiful woman present. The red garb she wore emphasized her seductive forms. The deep low cut of her dress hardly concealed her good looking bosom. While she gave everyone who spoke to her a sultry look, her body was telling this evening she was open to an adventure.

The man at the buffet was watching her close for a while already. While he tasted the salmon that was exquisite, he established the fact it wasn't the first time for her. The little gestures, the hankering glance that held a promise, they were all trained. One by one, studied movements, like a chess game, with the only outcome that resulted in a victory. The woman was hunting, and her prey was unresisting, already captured in her nets, without being aware of it.

When the music started with a slow, sweet as honey, he saw his opportunity and dodged a few women, who were attracted by him. Meanwhile, he had put his glass of champagne on a little table on the side. He caught her attention looking straight in her eyes.

Can I have this dance?’ Classic, but irresistible, he made a little bow and gave her his right hand in an invitation to lead her to the dance floor. She looked at him, smiled in a coquettish way an accepted his invitation.

Without giving a sign, they danced a bit closer. He felt the friction of her upper-body against his shoulder. Her breasts felt soft, even if it was only his imagination that got out of whack. Her belly against his, just a moment, sensual, a feeling warming his blood.

He took her hand more firmly. Maybe in a familiar way, even more than that. She looked at him through her long eyelashes, without lifting her head. The tip of her tongue touched her lips very lightly. He felt her fingers on his neck. Chilly, as women fingers are. Even so, he felt warm, especially when he felt she caressed the little hairs on his neck. Now he felt her breath too. Mixed with the smell of her light perfume, he detected a slight hint of mint. Fresh, seducing.

His hand lowered, feeling the beginning of her derrière. It was a beautiful synonym he thought, for the body part that possibly could get a shabby determination. A moment he thought she would protest, but it was just a moment of surprise. Something she didn’t expect, yet. Did he deliver on her hope or was he too driven? A smile told him he was right on schedule.

Not that he could sing very well, but he whispered the lyrics in her ear on the tempo of the song. A moment later she gently pushed her head against his. He felt her trembling in his arms. His lips touched the skin behind her left ear. Just not a real kiss. She pushed herself closer. Now their bodies were tight together, as close as decently possible. Their hips rubbed against each other. Her breath quickened.

‘Maybe we should go outside for a moment,’ he proposed. She nodded, almost unperceived. Like the bow of a ship, he dug through the crowd, the woman in red behind him. Nobody looked at them when they left the room. Nothing indicated the storm that was raging inside of them.

LynnMarie Lupe-Martini: Love this story is there another part to it

Read Now
The Legacy: The Son of Leviathan by NicoleRidd3y

dionnan01: Can not wait for this story to go on. I have read one book till now (Trapping Quincy)and I will read everything you write.I can find everything in your novels, I laughed, I couldn’t let the i-pad down till I finished the story. I am addicted to your way of writing, never stop!

Cristal Bollinger: For Cubs at once ..... They will be busy

Read Now
Maybe You're A Raccoon by Cheryl Terra

lapatrick74: This was short and sweet 💗💗

Lissy: Oh this book was amazing. I absolutely love it and the characters.

Lissy: I do hope Shar isn't in trouble. I do love this series. I'm going to find my next book

Sue Watts: Like I have already said I am really enjoying reading these books and all the people in the story the Shifter brother's really make me laugh with the way speak to each other and other people.Camt wait to start the next book

Read Now
The Return by ashleyc94

Lee H: The entire series was fantastic. Loved how the characters were lined up for each story creating an a phenomenal flow of the characters in the series. Congratulations 💯❤️🤍❤️🤍🌶️🔥🌶️🔥🤍💦🤍💦🤍💦

olarindeolawale19: The story is quite interesting and the plot is well constructed. The tenses used are bit dodgy as simple present tenses are mixed in with past tenses; all in all, it's quite a joy to read.