hey, I'm Tazz! he/him. I'm hoping to actually finish a story of mine on here and I'm looking forward to discovering new ones. :) When I'm not writing, I act, draw, and make music! 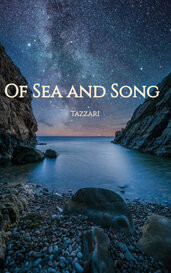 Of Sea and Song

After falling off his father's ship, the Fairweather, Davon forms an unlikely bond with a siren, Tazeth, who heals his leg. Davon struggles to fully trust Tazeth, but when the tides turn for the wo...

Curse Drakko has an incredibly unique form of storytelling that has great characterization in the smallest moments! This was not just a story--it was an experience from start to finish, and I mean that in the best way possible.

I read this in one sitting. Although that was at around two in the morning (that's on me), I don't regret reading this. There's a lot to take in, especially with the writing style, but I think that's the beauty of it--I could go back and find new things I overlooked upon the first reading.

(Update: there were indeed things I rediscovered upon another reading! There was foreshadowing that completely flew over my head. Well done :) )

The dialogue has a poetic rhyme scheme to it, and the bits of narration from Drakko's perspective are equally as detailed. To the fight to uncover the truth, to the conflict between Drakko and his brother, Garavan, there's not a dull moment. Everything here drives the plot forward.

When I was reading this, I could totally picture it as a stage play. It's not something I often see when reading (and more often, they're assigned readings for school), unless the story was specifically written as such, so this format was greatly welcomed to me personally. This stands out in a refreshing way. I gave a visit to your website, which is really well put together! It was fascinating to read about your start with writing and the spiritual element that ties into it. You've put a lot of work into this and it pays off.

The only real nitpick I have is on grammar. Some random words are capitalized in the dialogue and appear out of place, but it might have been intentional? ('Here' in Preface, 'MySelf' in Act 1, etc. This doesn't include the capitalized words such as Mask and Void, since those have plot significance.)

All in all, I'm looking forward to the rest of your stories and writings! This has inspired me to explore things in my own writing, as well as internally. Keep writing!!

FAVORITE QUOTES OF MINE:

"It is hard to make promises of bright, peaceful and love-filled futures, especially in a world such as ours." - Drakko, Act 2

"Must I kept eyes my clear...
Ears sharp kept me well near...
Horrors opened my mind...
While rest was kept being blind..." - Drakko, Act 2 - Home Sweet Home

"She's the light that one does need!
Purpose now have all my deeds!" - Drakko, Act 3 - Kindling

"... when the burden gets large enough, when the world you know and rely on in the deepest corners of your being collapses on your back... All of us break... But we should not! We should be bigger than that! Stronger than that! Better and kinder than that."

"... the universe has a special game for everyone to play, where we either break along the path, or endure the weight we're destined to carry... If not for us, at least for others." - both from Act 3 - Kindling

"Power, no matter how grand, whether wielded single-handedly or partaken in by service, is intoxicating, and does truly obscure the mind. But that is the world I live in, and in it, whether I like it or not, you either learn how to swim or are drowned without lasting remorse." -Act 3 - Kindling

"So speak one more word,
and you'll hear the unheard!" - Drakko, Act 3 - Kindling

"Who is it that decides,
where the fate got us now?
Whether it's meat or the hound,
only with time we're endowed..." - Act 5, New Ends

Nearly the entirety of Act 6 for just how existential it gets, with this standing out:

"You'll learn the Truth accept!
That Void cannot be fled!
That all life leads to death..." - Act 7 - The Flow