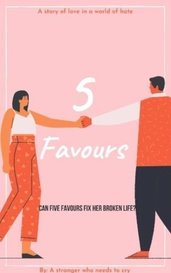 Run as fast as you can I will always find you... When Angel's mother leaves, her life changes forever. Her once sweet father turns to abuse and her life turns to chaos. She quickly finds herself ...

You got me hooked from the very first chapter. The way you write makes me feel like I’m right there, and I can envision everything so perfectly. The way the character interact with each other also feels so real. I love this book and I cannot wait to continue reading.

I like the plot but sometimes the story gets confusing, this is due to the paragraphs not being spaced out and other grammatical errors. I still like the direction of this story though and hope you progress in the future. This is also a personal criticism, but I felt the chapters were too short sometimes especially the last two or three I read.

This book has been an amazing read so far. Although this might just be my personal annoyance, I hate how each paragraph has a line after it is done, It took me away from the story a bit. This story is also only two chapters so I cannot say too much but from what I read it is so good. Will definitely be waiting for new updates.

I really loved this book and it made me reminisce about my harry potter phase. At the same time, the author makes this book so much more, you get to see a bit more emotion and the writing style takes you through a whole new journey. This wasn't just another harry potter fanfic, and I hope the new reader enjoys it as much as I did.

This is a good story and the plot is great (even though I don't know the full plotline yet,). This story captures the reader and makes them fall in love with the book. Yet I cannot ignore some minor grammatical errors, you forget to capitalise the name ben at times, and punctuation is sometimes misplaced. Also, instead of telling the reader some things like 'he is thinking of her', let them realise it by your descriptive writing. (which you expressed greatly at other times.)

This made me tear up honestly and I love the rhymes and it is a relatable concept of growing up and having to accept changes. But a minor grammatical error is the blurb you wrote threw instead of through. But that didn't have an effect on the storyline so it is all good, you might just want to correct it.

The girl who smiles

This poem really hit me and I love the relatability of it too. The poem is a feel-good one, and the only critique I have is that it Is too short!

I feel like this story has a lot of potential, as although the plot was good the grammatical errors and just confusion of how fast-paced it was (especially the first chapter) really took away from the amazing plotline. I felt that the first chapter, although did really well as it kept me intrigued, was quite frankly all over the place. In the second chapter, I could not understand what was going on and it was hard to read as there was no proper spacing between paragraphs. Yet I do have to congratulate the author as the third chapter was a huge improvement and I can see the author is getting better in each chapter. Now the positives of this story, it keeps you so intrigued and you find yourself wanting to know more. The plot is so great and one of the only critiques of the storyline is if you hold some tense bits for longer so the reader theorizes what could happen and this will give you more engagement. I feel like with proper grammar and punctuation this story would be so good. Keep writing I know you will keep getting better and better.

It's only one chapter, therefore I cannot entail a lot about this book, but what I can say is that the author did an amazing job of engaging the reader. All through the chapter, I read there was well-written suspense, and I plan on continuing this book and cannot wait to see what comes next. I hope you add more quotation marks, because it was hard to know who was saying what at times. It needs a few additional grammar tweaks and this book will be even more of a splendid read.

This story was better than I had anticipated, but first of all, I will write about what I think should be improved. The grammar, although it was good most of the time, small mistakes made their way. (which is understandable, I need to improve with that too). I was hoping that there would be a chapter the two would adjust to each other. This would've shown the progress of their kinship as the story pursues. Instead, it seemed like a day they met were already very comfortable with each other, which is hard to understand as they both have dark pasts. Therefore you would think that would mean they would be a bit less social. Although I thought it was a bit fast-paced as they got accustomed to each other fairly quickly, I liked how their past loomed through the chapters making it very interesting and full of suspense. Overall the plotline was good just a few tweaks need to be made to make the story more engaging for the reader.