You are at:Home»Archives»Flash Fiction Challenge: 2

We posted another ‘Flash Fiction’ challenge for our users the other day. This time they had 50 words to craft a short story. The catch? The story had to be inspired by this image: 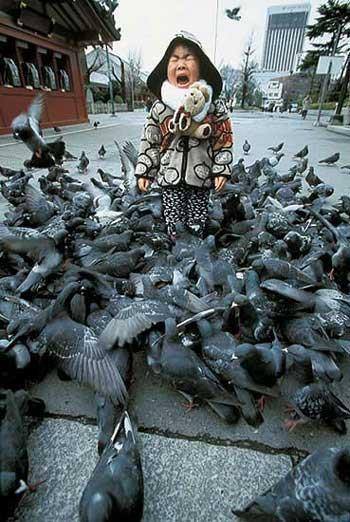 We got some pretty awesome responses! You made us laugh and blew us away with some of your imaginative takes on the image.

Here are our favourites (in no particular order):

“Mother had lied to her. “Piegons are more scared of you than you are of them.” She had said. Liar she thought as piegons strutted around her feet. She looked down breifly and saw too many beady black eyes staring back. It took her a whole second to start screaming.”
– Kylie Anderson

“Her parents discovered her ability to call birds when she was a toddler. She had tripped, dropped her ice-cream and after a moment of disbelief her whimpers turned into wails. One after another the pigeons crowded around her. But none touched the soft cream. They all cooed in consolation.”
– Katerina Constantinidou

“Gretel, go outside and enjoy the day,” mom said. “You won’t get lost. Hansel will go with you and leave a trail of bread crumbs. Pop by daddy’s candy store and maybe grandma will give you both a treat. Bye.”
“HANSEL! I AM NOT IN MY HAPPY PLACE RIGHT NOW!”
– David Wismer

“When shooting the movie’s first scene, it became evident to the crew that their remake of “The Birds” lacked a certain…panache.”
– Chris Chelser

“Little Zan cried as the pigeons began to eat her. Her mother wailed, as the world turned silent and closed its eyes.
This was the only way to get rid of the demons once and for all.
Besides: what is the death of one child, to safe the human race?”
– Debora Hellinga

“The day had gone well. The little girl loved going to the park to feed the pigeons.
Her only problem was when someone called them rats with wings. She HATED rats.
Watching the large grey rabble beneath her she could have sworn she glimpsed a long pink tail.
She screamed.”
– David Robinson

“She had no idea why Mommy and Daddy told her to stand still while they threw bread all around her. It wasn’t long before she figured it out. She wanted to move but they wanted a picture. Then one of them pecked her foot. Could not have been more perfect.”
– Mason Garcia

“And so, the bird – screaming demon awakens once more. . . ”
– Richard Cooper
Keep an eye out for our next Flash Fiction Challenge! We LOVE your responses and cant wait to read more!