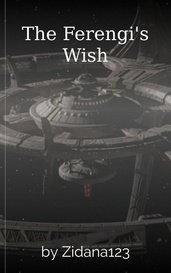 Why is it that only the Federation has to put up with things like people being kidnapped into board games? Maybe it's someone else's turn for silliness. A different kind of Deep Space Nine story.

The Wachowski brothers should owe you royalties or something for stealing your basic plot premise there, lol...

"But, once again, according to the laws of dating"

This line made me giggle.

"Kimmy was disgusted for a second, but it was quickly replaced by her own cocky smile."

Like the establishment here that for Kimmy it's more about fucking with Devona than enjoying fucking Mark. Excuse my French. Small but it's a good character establishment moment!

"why don’t you dump that dumb blonde and just go out with me?”

"Silence was his only response. Kimmy could feel her heart breaking."

Huh, I guess there is some attachment there and it might not just be entirely a thing to mess with Devona? Or maybe she's in love with the idea of messing with Devona?

"Devona smiled, “Or maybe your dad won’t let you."

Ha ha! Insert stereotype about Asian women and driving here! (Speaking as an Asian woman, they are actually true. >_>)

DEATH FLAG ACTIVATED. Whaddaya mean she's the main character and her picture is at the top of the page! :P

"Elsewhere in the carnival, a group with peering eyes watched from a distance."

"Little did she know, she wouldn’t get any sleep that night."

I personally REALLY dislike the use of this device, particularly here in a limited third person PoV. It breaks up the flow of the character's PoV, because you've basically just had me, as a reader, inside Devona's head, then suddenly I leap out of Devona's head, into an omniscient third person narrator PoV (who also knows the future, or has at least read the blurb) for one line, then immediately back into her head. And it's super-distracting and it crushes the smoothness of the narrative. At least for me.

This next one's probably down to personal preference, but it kinda weirded me out.

"But as the footsteps got louder, they demanded her attention and she finally replied. [paragraph break] She glanced up just in time to see a tall dark man running straight at her."

'Replied' is appropriate because it indicates that she's giving her attention, but 'replied' is usually used as a dialogue cue, or at least I'm kind of conditioned to think of it as one, so when I read the line I thought it was going to go into a dialogue, and when the next paragraph started off with an action, it confused me for a few seconds. I'm not saying that the word's use here is wrong or anything, but it just made me go like ? for a moment.

"Devona cried out as the man’s body slammed into her and she lost her balance. Next thing she knew, she was lying in the dirt with the man on top of her."

So this is the love interest then? LIterally knocked her off her feet! Nice! XD

"Probably his most striking features though were his deep yellow eyes. They were something that Devona would expect to find on a predator,"

"Sure, the shirt wasn’t quite too far out, but it was rather weird. It wasn’t baggy like the shirts that most guys wear. It was tight and tucked into his blue bell bottoms? Not to mention his white platform shoes."

Oh god, he really IS a vampire! XD Or at least a Buffyverse vampire, before they nixed the whole 'vampires wear period dress from when they were sired' idea.

Jokes aside, I do like that this guy is wearing 'inappropriate' clothing. Gives personality to the story and is a nice bit of attention to detail! Also I can't help but notice you went with the 'say he's hot and define skin tone and eye and hair color Meyer school' of describing the romantic interest! People get on Meyer's case about this one, but it's honestly not a bad technique! It's a great way to get some audience participation going. Now I can imagine him to look like whatever I want when I self-insert as Devona... Yeah, he's got a strong face with broad cheekbones... or... but wait, I'm automatically self-inserting as Kimmy. What do? D:

"“Do you need a hand?” he asked. She could tell that he was really annoyed, but it was one of the sweetest things that anyone had ever done for her."

That is quite sweet! Knock down a lady, she yells at him like a banshee, but he still helps her up! What a gentleman!

Oh no! This is where it starts! Protects your necks, everyones! XD

"the man whose name apparently was Ulric. "

Huh. Now that's an interesting coincidence, in my story I also have a character named Ulric... well, Ulryk. But that's basically the same name. How did you come up with that name for your character? For mine, I looked it up on a Polish baby name generator and apparently it means something like 'heritage, patrimony, rich, powerful, ruler.' Thought it was a fitting name for a King in my story whose descendants would be "[raised up] to be kings over all the Earth."

"Devona lost all hope. Why were they all dressed as if they had just stepped out of the seventies?"

For some reason I'm getting a kicking Dr. Who vibe.

"There had been too many amber alerts lately and she did not want to be one."

Can't stop laughing. XD I know amber alerts are like a totally serious thing and all, but this is a great line.

"The tone of the voice was like velvet touching her ears. It was so sweet and seemingly innocent she couldn’t help but open her eyes to see the most shocking sight of her life."

Nice description there. I'm making the call now, it's gonna be a DRAGON!

Okay, well, uh, that turned into more of like a reaction/commentary thing than an actual review. Actual review starts here!

For starters, I have a confession to make... Just going off the blurb alone, this is not the kind of story that I probably would have read on my own. That being said, I'm having a great time reading this. It's super-fun and while it's really cliche (at least so far), that's not inherently a bad thing. It all comes down to execution and I think you executed it very well. Don't really have much of a grasp on the characters yet so far, except for maybe Kimmy (but that might just be because I'm self-inserting as her), but that should come with later chapters.

Will read the next chapter tomorrow! Hopefully. Looking forward to it!