Tawni Vipperman had just been killed in cold blood. But right before she died, she did something that caught the attention of those who watch over us. Denied entry into heaven, she was instead chos... 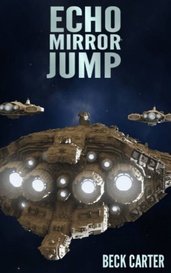 A fleet of extraordinary ships left the Foristi planet, bearing an entire civilization of humans. They had no choice but to run, abruptly leaving a hostile situation without permission. Far fro...

Get ready for a ride. Our mysterious MC is running for the bus to get to a party to meet someone special. But the bus route shifts as well as the narrator's memories, into a malicious dreamlike state. As the bus traverses the many landscapes of hell, the narrator comes to grips with some horrifying memories and guilt.

I finished what has been posted at 18 chapters and I believe more is coming, and I honestly can't wait. I couldn't stop reading this. Couldn't stop. My eyes were glued to the screen as I tried to make sense of what was going on. Who is our MC? Who is the Jade Man? Where does the guilt stem from? Would crime could be so great that it led the MC to Charon?

All the while, the story is thick and beautiful with dark prose that'll give you goosebumps. This author doesn't belong here. He belongs on the NYT bestseller list.

Right from the get-go, this is an addiction-fest. The first chapter sets the stage as you're trying to figure out what is happening right along with the main character. And pulse-punding actions begins straight away with an escape sequence and reveal that'll blow your mind. This was so much fun to read. I thought it was worded extremely well and I enjoyed our character's state-of-mind and confusion. I'm sure we'll see her character grow if memories return.

The Power of Emotion

I have an older son and a little girl, so naturally, they were in mind as I read this story. He loves his little sister and will do anything to protect her, so I found this story very relatable on a personal level.

This short story will invoke a lot of emotion, which is difficult to do in such a short amount of time. This says great things about the author.

Have a read, and get the tissues.

In the vein of Lost in Space, a colony of weary human humans descended from those confined on a thousand-year voyage aboard the Aspire, settle on the first habitable planet they find. Before long, an inhospitable environment complicated by mutinous treachery threatens their extinction.

If you're looking for fast-paced action with heart-pumping, page-turning (clicking) potential, you found it. This is a thoroughly enjoyable story that you can't stop reading. Great character development, heartbreaking loss, and emotional attachment that is formed between reader and our unlikely crew of heroes. Wonderful storytelling.

A beautiful vignette left open to interpretation, as they should be. Could Ink be books? Could Ink be the pen? I find solace and truth in both. Beautiful words.

I love a good story that doesn't dawdle. This one has you in the action in no time at all. The character descriptions glow and really jump off the page. At many points, you feel like you're there, with these people. A very engrossing read thus far!

These stories are so incredibly well-written. I'm only five or so chapters in, and each chapter is a small stand-alone story in itself, chronicling the development of the Second Age of Man as the Gods and Goddesses lord over it, make appearances, and guide the development. Each one is powerful and compelling. It's really hard to stop reading!

A new set of deities are in the making here. Love it!

I had a very big LOTR feel mixed with Celtic lore - a dark one with a purpose that felt akin to Sauron with great battles that usher in new ages. The writing style is unique. It is written in the style of a theatrical script with narration throughout. This does well for the imagination. I had a lot of great imagery going on in my head as I read. I have not finished yet but I'm looking forward to it.

An easy-to-relate to story of Saturday night venting - when your guard is down and so is your suspicion. After a few drinks, everyone's your best friend. I know that very well. And when your charm and happy-go-lucky state of mind is taken advantage of --- ug! It's something that'll stick in your mind forever.

A great quick story that was told in a very relatable way. I made me wish I had been there to witness the crime - and bust the culprit!

This author does an amazing job with first-person writing. You get such a complete picture of the main character and who she is. She's fleshed-out and real. Well done! And the storyline is very sophisticated without being a bore. It's absolutely tantalizing! You just want to read more and find out more about this strange reality. Worldbuilding at its finest!

A wonder With Show Instead of Tell

The story goes along with the reader completely in the dark, trying to figure out the mystery of the game. I love that we're right there with Dale, the main character, as the down-and-out, unemployed alcoholic who just needs a break. Any break. And we're elated for him when he gets that break. But the mystery remains untold (so far - I'm only a few chapters in) and I love that story keeps you hooked with secrets and intrigue. Love it so far!

The character development in this story is superb. The main character has become fully fleshed on in a very short period of time. And the myriad other characters around her are also well done.

The storyline is addictive and compelling. You are desperate to know more about this world while questions begin to form - what will the trials be like? - what is the prophecy? - what are Gabriel's secrets? These great hooks keep you coming back for more.

I really love it when authors take the time to create a bit of their own language. It's very "Clockwork Orange". Viddy well! There's a whole Clockwork Orange dictionary for that one.

Really well done. I love the first chapter as the girl is going through some sort of traumatic event. It was done so well, I really felt her pain and anguish. Moving on, we have some compelling mystery - a mystery man, court intrigue, and sudden confusion. Is she really who she thinks she is?

I'm loving this story and I can't wait to read more!

I'm only a few chapters in but thus far I love the world-building. World-building is probably one of my favorite aspects of any story. I love to be submersed in the world whether it's fantasy or historical fiction or scifi - build the world and I'm hooked.

I love the creativity involved with the fairy children's teachings. A little school of Hogwarts for the fae. And I also love the supportive and hurting nature of all the elders involved. It gives a warm feeling to read.

A dangerous and dark protagonist

This is a dark story of court intrigue and forced pairings in an empire of vampires. The main protagonist Amelia is edgy and angry, but we don't quite yet know why (I'm only up to chapter 5). She's a vicious killer who doesn't want to be "mated". There is a searing, immediate attraction and denial.

Great start! I was totally vested and wanted to know more. Both Amelia and her soon-to-be-mate(?) are on the unlikeable side, which was kind of fun to read through because you're hoping for some sort of redemption, or a backstory explanation. I've always had a love of antiheroes.

I understand, as you said, that this has not yet been edited, so it wouldn't be fair for me to dock you on grammar/punctuation. Totally normal to edit later. I tend to edit chapter by chapter, we all do it differently!

A stunner with hooks

I loved this! I read through the first three chapters and I loved how the end to each chapter absolutely compelled you to turn the page. I'm fascinated with the story so far and I want to keep reading this one. My only thought was in the first chapter, I was looking forward to what the house looked like as they stepped out of the car. Was it a colonial, a Tudor, a farmhouse, a Victorian? I wanted to know a little about what the house looked like from the outside. (I'm a little fascinated with houses).

Keep going with this - it's amazing!

Great start - I absolutely love the premise. I read that there was a little "Band of Brothers" influence on this storyline and that's one of my favorite all-time shows. Naturally, I love this idea. A cosmic mix of various specie paratroopers fighting for the same cause. Love it. Great writing style - loved the intro narration.

Only 2 chapters are up as I write this and I'm very curious where this story will go. The acceptance of a lonely mission, a forced separation, absolution needed. Fantastic start, I'm already hooked.

I remarkable short story. From the first to the very last chapter, the alpha to the omega (a storyline hint), I was hypnotized. Couldn't stop reading. Thank you for this.

I loved the interaction with the main character and the alien at first introduction at the locker. That was a nice connection and really told you a lot about her character, and how much she deviates from her parents and thinks for herself. I would totally keep reading. Only 2 chapters are up right now but if there had been more, I probably could call today a wash and just read.

There's a glitch in the Matrix!

Very Red Pill / Blue Pill - but no choice was given in this case. Thrust into a new world with no rhyme or reason, the first two chapters are going to make you ache for more. "Who" is coming? And "What" is going on? Great hook.

I'm intensely curious as to where this is going

I'm on Chapter 13 (2.7).
I was blown away by the author's ability to invoke the emotions of the main character and make me feel them the way the character did: loneliness, regret, sadness, disorientation. Great fight scene with an unidentified foe - my heart was pounding! Can't wait to read more.

An Adventure Through the Galaxy!

A short story that's big on fun - adventure, excitement, and some sass. I liked this. It held my attention from start to finish and I didn't feel the need to skim. I was locked in for the duration. I imagined a "space highway" where one could see turnoffs for intergalactic space diners. This really made me want a space car. Easy writing style and a great hook.