Just a girl who loves to write and dreams of being a published author someday.

Katriana Fairchilde is just a normal girl. Well, as normal as a girl with no family—and no memory of them ever existing—can be. Raised in a good foster home with perfectly loving parents, Kat doe... 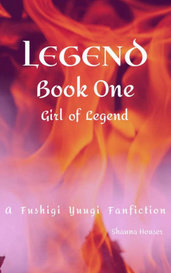 Legend: Book One - Girl of Legend

KC ONLY wanted to find some information for an assignment. What better place than a library, right? Hey, now, who put that man-eating book over there? The Girl of what? The Priestess of WHO? She RE... 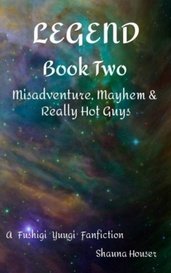 KC has made it home, but she won't be staying long. Things are going well and, by some twist of fate, she even managed to avoid her biggest problem: explaining where she's been all this time. Too b...

“The night my sister was born, Death came for my mother. I was there to witness his arrival.” And on that night, Gabriella Quinn’s life irrevocably changed. An outcast touched by magic, tormented ...

I read the first three or four chapters but I guess it isn’t for me. I couldn’t connect with any of the characters. We know what they look like, but what about their ages? What grade are they in? What’s the name of the town they live in, the school they attend, etc? Is Anastasia even interested in acting before being magically dumped into Hollywood? Is she even GOOD at it?

Little details like this serve to give a surprising amount of depth and realism to characters and settings.

I’m sorry to say, I also find the plot to be a little unbelievable.

I think if the twins and Callum were truly Anastasia’s friends, they wouldn’t have turned on her like that. Callum, especially, after being described as the nice golden boy, I can’t picture ever being interested in somebody who is such an obvious bully. Especially to his best friend. It’s a complete contradiction to his character.

Anastasia especially bothered me. I just couldn’t empathize with her at all. Her leaving home and running away, I don’t find believable. She’s an underage kid and there is no way her parents wouldn’t be out searching for her. Or have the authorities on high alert. Her making it in Hollywood in only two years just seemed unnaturally easy. A huge corporation would NOT hire on an underage minor without parental consent. There would be legal repercussions, especially if her face was plastered all over tv and the movies. Somebody would recognize her.
Her agent also could not become her guardian without a whole lot of legal battles. Child protective services would have to step in. Investigations would have to be made to prove Ana was actually neglected. I’m sorry, but nobody would take the word of an angsty, whiny teenager over the proof that she was raised in a perfectly good home, provided for and educated. She would more likely be hauled straight back to her parents and sent to a therapist.

The book does need editing as I noticed numerous grammatical errors and typos as I read.

Overall, the book shows promise but I think the author needs to carefully reconsider her opening chapters and do a little research on how Anastasia might find a more realistic way to leave her hometown and make it big in Hollywood. Such as applying to an acting school across the country or something and being found to have a natural talent, being scouted during a school performance, starting small with things like commercials and working her way up. She at least ought to graduate high school and get a diploma or GED.

As requested, I read the first two chapters of this story. I’m afraid I’m not interested in reading further, because there is a lot wrong with it.

The premise of the story sounds interesting and caught my attention, but the execution leaves a lot to be desired. The writing came across as a bit amateurish. There is a LOT of editing to be done. Sentences were blocky and poorly worded. Many rambled on. I found myself skimming just to get through the chapters faster because I found myself not caring about what was going on. It was just mundane stuff not really important to the plot. Probably could have cut the chapters in half and not lost anything important. Less is more in some cases.

There were also numerous grammatical errors and typos that kept distracting from the story. Constantly using “there” instead of “their”, for example. Poor editing is a pet peeve of mine, especially when there are so many programs that will catch errors like that. Really, a thorough editing with something like Grammarly would do wonders to improve the prose and make it a lot more readable.

As for the main character, she’s a little bland. Melrose is supposed to be an adult and yet her “voice” came across exactly the same as her teenaged sister. I couldn’t distinguish her personality from other characters. I was struggling to guess her exact age as it wasn’t mentioned in the chapters I read (unless I skimmed over it). If she graduated college that would put her in her twenties, so making her sound like a sixteen-year-old is detrimental to her character.

I do like your cover and your title, although I would suggest making the music note white like the rest of the word, because it blends too well with the cover and makes “melody” look like “melo y”.

There isn’t much written yet but it seems like an interesting concept. I’m curious to know why she’s forced to hide her power and who the mind benders are.

There are some things that need to be worked on, however.

Also, in the first chapter, I recommend removing the “Evelyn’s POV”. It looks amateurish and the reader ought to be able to discover whose perspective it is without it being spelled out.

Also, all throughout the chapter there were constant tense switches. It starts in present tense, a few sentences down switches to past tense, and a few sentences later goes back to present, then back to past ... etc, etc... It’s kind of distracting to read that way. You need to choose one tense and stick with it. Past tense is probably easier to write in than present.

There were other grammatical errors as well, and at times the writing felt a bit overly-descriptive, but it’s nothing a good editing can’t fix.

Overall the story plot and such does show a lot of potential, it’s just that the chapters need to be edited a little better before being posted.

It shows some promise.

I read six chapters of this book. It wasn't bad. I think there is some potential for it, but it does need some work.

The descriptive prose is great, but after the first few chapters it got to feel a little repetitive. There are six chapters of the girl describing how sad and lonely she is, but there doesn't seem to be a whole lot of plot advancement going on. There so far is also no clear answer over what her tragedy was. Perhaps it's answered in chapters seven eight or nine.

I did find myself skimming ahead a bit over some of the paragraphs just to get ahead, which is generally not something you want to happen. It means you're focusing too much description on mundane details that are entirely unimportant to the story. You need to strike a balance between letting the reader see what goes on in her life while keeping the plot moving forward.

She writes in her journal a lot and at times the lines blurred between her journal entries and what was happening to her at that point. It was a bit confusing to figure out which was which. Perhaps a different font for the entries or italicize them, something to make them stand out from the normal prose..

The relationship between her and Colt feels forced and unrealistic. It makes no sense. It developed way too fast to be believable and honestly I couldn’t get a grasp of his character at all. Is he a student? Is he just pretending to be a student? How does he know anything about her without her telling him anything? It doesn’t seem very well thought out to me.

The grammar needs work. Many misplaced commas, wrong use of words, sentences that need structured better... There is a lot of use of was/were and "ing", which makes the description feel a little passive. For example, rather than saying something like "the moon was shining on the ocean", it would sound much better to word it as "the moon shone on the ocean". This is a problem I have with my own writing, it's a habit that's easy to fall into and hard to break.

The story does have potential to be really great, but I feel it needs a good polishing to really make it shine.

It shows a lot of promise.

I’ve read a few chapters of this so far and it’s an interesting story. I like retellings of myths and fairytales, but I don’t think I’ve read one about Persephone and Hades before. Admittedly, I’m not too familiar with that particular myth.

I am a little cautious about continuing further. In the original myth, Demeter and Hades are siblings and in this retelling Hades is Zeus’s brother, which effectively makes him Persephone’s uncle. I’m not sure if the incestual relationship is deliberate, but it might be good to warn readers about it, especially when it gets into the 18+ category. That sort of thing might turn some readers off. I know I’m personally not a fan of incest relationships.

Aside from that, the story shows a lot of promise. I do think it needs a good bit of editing to clean up numerous grammatical errors, however. Wrong words used, misspellings, changes in tense, that sort of thing. Stylistically, the writing is beautiful even with errors, but I do think it gets bogged down in too much detail from time to time. It tends to slow the story down a. bit.

I like her characters. They seem pretty well-developed and keeping with their known personalities thus far. Overall, I think it’s worth a read.