Disgraced Wattpader by consequence of getting reported for my novels being too intense. If I had a penny for every shot I take, I’d have enough money to pay for the therapy I obviously need✨ 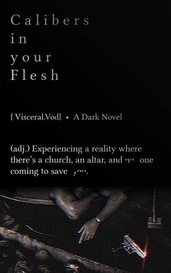 Calibers in your Flesh

Finally given the chance to surpass the tribulations of her circumstances, Fae Vancer is determined to live the simple and altruistic lifestyle she always believed in. She didn’t expect for it to b...

Death and Other Optimistic Concepts

This has to be one of my favorite poem collections so far. The way the author describes such vivid, raw emotions in so few words is absolutely spellbinding. Can’t wait for more, thank you for your beautiful work!

Here we have a very talented Author Kat_Law, who excels at making me experience the raw emotions of fear and genuine anxiety for the main lead Fayah as she tries to escape her plight, all this and more, all in the first chapter. A promising start with an even more promising future! Watch out for some common spelling errors and increase your usage of commas for a more balanced reading experience, all in all, can’t wait to continue reading!

I’ve read the first one shot that has been updated so far, and honestly, it’s great! The writing style and syntax is amazing and the details are all there! Looking forward to Author Layne continuing this collection of one shots!

Falling for the Fighter

The one thing really holding this book together, is the plot. I like how the characters interact with each other and it does give you interest in what Andrea will do next as well as other characters. I really enjoy the dynamics with her friend and family. So good job on that.

That being said, I think you suffer from common issues that many novice writers suffer from. I won’t get into grammatical errors because while your first few chapters contain quite a few, they are minor and can be easily fixed with a few rereads or an editor. What I’m really concerned about is how your characters can become boring because of how you oversimplify how they talk to the reader. For instance, in the first chapter alone, Andrea says she’s thinking about the meaning of her latest painting, and here comes that dreaded ‘because’, all her paintings have meanings. Why say something so obvious? Another time in the second chapter, she says she painted a space theme on the black BECAUSE it looks more realistic. I think this is a shining example of where “show don’t tell” comes into play. Instead you can describe HOW she makes it look more realistic? What colors does she use? How does she feel as she’s painting it? What kind of brush strokes does she use? You reinforce the fact that she’s a painter, but there nothing behind it besides her really saying “I made a painting.” Let the readers minds wander a little with some descriptions, you know? You don’t have to explain every action they do. I would have enjoyed the part where she pranked her brother with a fake spider more if you explained how he screamed, how he sounded. For example, was it a shrill scream, like a child? Did he flinch so hard the fake spider came flying off him? “He shrieked bloody murder” is okay, but can be described so much better. Work on your descriptions of how characters react to each other, there’s always a better way to reword something and have so much more feeling behind it instead of “she yelled, he cried, he sounded sad or unhappy” you spend to much time explaining instead of showing it through their actions. You have potential and you can definitely get better as a writer. Work on it!

Read the story now
Does Hair Have to Grow There? by maranstew
Overall Rating
Plot
Writing Style
Grammar Punctuation

I never knew I needed this kind of comedy in my life until I read it. The hilarious, ridiculous anecdotes of the author, paired with her simultaneously great grammar made this book an absolute treat to read, especially for someone who isn’t looking for any particularly heavy topics or themes at the moment.

I would recommend all (Adults) to read at least a few chapters of this once. You won’t regret it! Also the name is rather interesting, you’d think she’s talking about one thing, but turns out she’s taking about another but it’s still applies JUST as well😂😂

Okay, may I start off by saying, this book has a tremendous amount going for it! The intricate character relations, the initial budding conflict and all the little anecdotes of Destiny's insipient perspective of events in between...Amazing! Everything has shifted nicely in place to play out the blueprint for future events that will unfold. I can't wait to see the story packed with action and adventure that's sure to come!

Besides a slow, easy start, one thing I can definitely say I'm envious of is the author's capabilities of writing understandable, realistic relations between characters. The flow of thoughts can be improved through a more smooth style switches between thoughts and conversations, but does not hinder the themes and overall message the author conveys through this story. In general, a great, compelling read that you shouldn't slight!

I went into this story expecting some type of action packed scenes. What I got along with such expectations was a gripping plot that keeps me guessing and wanting to know more about what's really going on (No spoilers here!) thus far and whether I should just take the protagonists feelings and perceptions as my own. Can't wait for the next update, this is a must read!!!