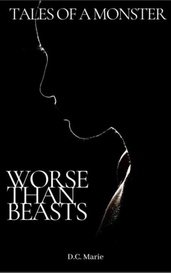 Worse Than Beasts (Tales of a Monster Series)

"When you run with Wolves, you shouldn't be shocked when they turn on you." In a world where monsters hide among humans, and are subject to the rules of a strict and unforgiving Council, Maya has ...

I read the Man and Magic novella, and overall, it was really good! I enjoyed the world and found it extremely interesting. I personally am not very tactically minded, but I feel as though the battle scenes, particularly where Xavier used his powers, were explained very well. The description of God was particularly good, and the idea of God giving Xavier his powers was interesting.

While the world was great, and battles were descriptive, my biggest criticism lies in the characters. They felt a bit flat to me, especially Xavier and Alara. What makes them unique from anyone else? What defines them, what are their motivations, why do they do the things they do, why should I root for them? None of the characters felt defined. None of them really felt like they could be differentiated from the others.

While your ending was nice, it didn't really feel like a proper pay off. The king turning on his best friend so suddenly also felt a bit off, as far as how he had been established beforehand. Again, the characters were undefined, so Xavier choosing Alara also didn't feel like a proper pay off. If we saw more of their relationship, and really saw why they loved each other, it would feel more powerful when they were separated and then reunited.

Your plot was good but, in my opinion, characters are what makes the plot worth caring about. I just want to say that I understand that it can be hard to give characters their own unique voice, especially in such a fantastical setting. As you've said in your review of my book, writing is hard. I understand that this is a novella based on another series of yours, so maybe these characters are all established in one of those books.

Again, your book was good overall. There were a few mistakes, but given how long each chapter was, that's understandable. None of them were overly distracting. Good job! Please keep writing, and I look forward to reading more of your books!

Overall, this story was good! There were a lot of grammatical issues, and there were some issues with showing vs. telling. There were also a few tense inconsistencies. But the main character was very relatable, and overall, I'm excited for the next chapter!

I love biker stories so this was great! Good characters, and really descriptive language makes everything really easy to visualize. There were some grammar issues that could be distracting at times, but overall, a good story!

So far, this is really good! The characters seem interesting and seem to interact well together! The format of a group chat is also very interesting. I'm excited to see where this goes!

There are only five chapters, but it has been really interesting so far! I'm excited to see how Ariel and Alma's relationship will change over time. Overall, this is really good and I'll be keeping an eye out for the next chapter.

The story is one of my favorites on both Inkitt and Wattpad. I've been patiently waiting for updates since chapter 5 or so, and the wait has been totally worth it.