Writer. Editor. Author of "The Tests of Time" Trilogy. Check out my blog for exclusive stories not available anywhere else! 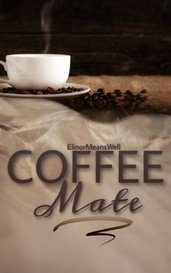 "With the array of hopes, She went to meet him; Over a cup of coffee, Their love took birth!" - Girl Around The Corner <> Scott Logan and Elianna Winters feel trapped in their dead-end job, uncerta...

"One of the darkest evils of our world is surely the unteachable wildness of the Good." - H.G. Wells As Ivan Hayes and his team of time travelers search through history for Elinor, they discover th...

"Human history becomes more and more a race between education and catastrophe. - H. G. Wells" Those words were written within the bound pages of a supposed fictional book but the mysteries that sur...

I have started many stories that tried to capture the whole "Alpha/Omega" thing - and a majority of them I have not been able to finish, namely because there wasn't enough detail to captivate me or it was the same basic story over and over again.
This story quickly caught my attention because it was unique and different. I enjoyed that it didn't go the usual route other stories like this go and that it didn't go the way I had originally been concerned it would. You created a creative story that allowed us to see Autumn and the Alpha King grow - capturing their weaknesses and showing us how they grew past them. Along the way, the two transformed slowly into something bigger, better, and stronger than what they were on their own. Aside from just showing us THEIR story, you also gave us glimpses into some of the other character's lives and roles. I would have enjoyed a bit of a longer end but I will say, I really like the way you handled that ending - especially showing us how Autumn embraced her role as Luna. That was pretty epic.
There were also some great moments that made me chuckle or laugh when you allowed us to know what their wolves were thinking, and how Autumn and Elijah responded to them.

- You did well. Your story was captivating as is, but I hope you give it another look one day and flesh out the details - you've painted a pretty detailed story that allowed me to envision the rooms and the scenery around them and I think you can expand more on that side.
- Grammar is TOUGH. There were a few grammatical errors throughout the story but I know we all struggle with those (I wouldn't be surprised if I have a few in this review). I have been writing for 15 years and I had no clue how difficult keeping track of your grammar was while writing until I had an editor work with on my stories. It's not an easy thing to keep track of when you're in the zone, so I highly recommend using a grammar tool - I personally use Grammarly to help me out but there are other great grammar tools as well. :)

Thank you for writing this! This was an intriguing read and I look forward to checking out your other works. Take care!

Better Than The Show Itself

Timeless was just one of those shows that really stood out against the others in season one, especially when it was renewed after it was canceled. Season two proved to be less as awesome and I was desperate to find a story that somewhat undid what the movie put into play.
Not only does this author deliver that, but she delivers a story that introduces an original character that is likable from the first moment you meet her - and boy, does she have a story.
We are given an adventure that crosses over a variety of areas of time travel and the diverse range of periods we travel to is astonishing. The author did her research and her education to make sure history was accurately written while adding some surprising twists that made it fit well with her story. Not to mention, we have another organization that is mucking things up in what is probably a greater battle than what the Time Team faced before.
Her description of the characters that we all know and love is spot on, and their interaction with the new character that is introduced is done flawlessly - which is a super nice plus because, in the majority of fanfics, it's usually done rather awkwardly. But not with this story.
This brings us to the new character herself - talk about a positive influence. We need more women like the woman that is presented in this story. Yes, it is fine to be strong, independent, educated, smart, and brilliant... but it's nice to finally have a story that doesn't demonize a woman for falling in love. That aside, it's just nice to have a female character that is well written and intriguing to read about, more so than the actual characters I had originally come here to read this story.
This story deserves more praise and I am grateful I have found it, it's one of the best stories I have read in a long, long while.