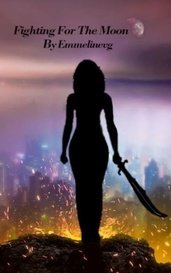 Fighting For The Moon

At the age of twenty, wealthy citizens can be chosen to become a Tenno. They will become master of blade and power, cleaning the Origin System of Infested or breaking up fights between Corpus and G...

The story intrigued me from the beginning. It's definitely not your typical werewolf story and that made me glad. There's a whole world behind it of gods and witches, wolves and priestesses. What bothered me was that I never fully understood the world. I am left with many questions. Most plot reveals confused me about another aspect of the world. Sometimes when a character walked around the room I couldn't quite imagine the room or they were somehow in an entirely different place a sentence later.
I loved the dynamic between some characters, but I don't feel connected with any of them. The thoughts and emotions of them are portrayed during the story. Yet something is missing. I want to get further under their skin. Feel like I know them better. Right now, they feel a little flat. I had so much trouble figuring out which characters I should like and who we were supposed to hate. The backstory of Evie's mother and Aenta was well thought out. I think if the author writes out the story more this could become a top notch book. The world and plot are unique and unlike any other werewolf book. But it feels like there's so much more to talk about in the book. There's lore of the world I feel like I'm missing or should be explained better or maybe even more early on. Also when the blessed furs were taken, nobody seemed to care. No one came up with a plan to free them. The story switched between Evie and Andrea a lot, but the two story lines didn't feel connected to each other. Some chapters were all about the blessed furs and how they were doing, then the other were about Evie and the decisions she had to make. It were such important events, but the characters didn't talk about it which made it seem trivial.

I enjoyed the story a lot. Both worlds are very thought out. Atlantis City was interesting and cool because of its background. It made me sad when suddenly the setting changed and I am still curious about what happened there. Sometimes, it took my focus away from the storyline because I badly wanted to know more about the bombing. Here and there were grammar mistakes and sometimes there was a quotation mark lost or suddenly there where it shouldn't be. If the author rereads the story I think they can get those errors out. I also thought sometimes things were overly described. I know dragons have lots of colors but the paragraphs of how they looked were long. It was nice how the thoughts of characters was in cursive. This book has a lot of potential! I am looking forward to the next book. I think this one stops rather abrupt. Maybe it needs a few more chapters? Until Draycos wins or loses the tournament maybe? So I did like this story! But I feel like it has two plots in one with the Atlantic City and dragon world. Good luck with the next books! I will definitely keep reading :)