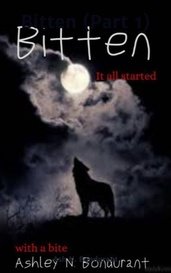 Werewolves haven't existed at all in history, no matter what humans may think. However, they're just beginning to exist. It all starts when seven teenagers on a field trip decide to wander off. The...

I read this whole story on Wattpad, and I pretty much liked it. However, some aspects can be edited a bit.
As Allison was being abused, she should have taken a little longer to trust someone else, especially a guy. I understand you want to keep each book at a 30 chapter minimum, but sometimes, it's nice to make it a tad longer, so your character can develop more.
About Tommy, I like him, but he would've had to understand that Allison had been abused, and that she needed time to trust others. After having read this, I do see that he's being patient, and I understand his feelings on the matter, but he does rush her in to things sometimes (not that it was a terrible thing, but if it had been the wrong thing, it would have been).
All I want to say, as someone who has read many of your works before, is that there should be more diversity when it comes to the overall plot. Sure, a rogue attack can happen at any point, but maybe you could have something else happen? Maybe like sickness, a war between packs, etc. I'm just saying reading the same type of conflict can be kinda boring.
I do like your work, but some things can be fixed. Hope this helped!