David Bush is a practicing haematologist. He has authored scientific papers in international journals. He writes in a political blog. This is the second book of the Jack trilogy. 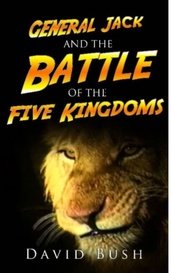 General Jack and the Battle of the Five Kingdoms

The times were hopelessly dark. In a green land before time, all animals of the world laboured under the repressive rule of King Roar the Lion and the fierce Felines. Miaow, the timid and inconseq...

This is a sweet, simple story. Throughout the author conveys that noisiness through the profuse use of action verbs and nouns that by themselves engender that perception of oppressive noise. It is all ironic since the theme of the book is a tranquil bedtime story.It's these ironic contrasts that editors cherish and the story ends with the protagonist yearning for release from that background noise. There is that wit and sense of irony throughout, in that the noisy child who can't be tolerated by her parents, herself cannot tolerate other people's noise. The author has an eye for fine detail , like the clatter of the false teeth and the crunching of the toast but I'm surprised she did not make use of more sound effects, like the barking of dogs, the swishing sound of the dishwasher, the sound of traffic outside and the loud background music or clanging of church bells. All this would heighten the reader's experience and stimulate his senses of both sight and hearing. Also , any reader could relate to this proliferation of mundane sounds.The use of illustrations with caricatures would also augment the humour of the noise effects. On the down side, there are plenty of grammatcal errors and the text will need plenty of revisions. It is a good initial draft with plenty of potential and I'm sure it can be improved upon, by say the inclusion of one or two simple satirical subplots and maybe better characterisation of the main character. Why is she called noisy Nula. Is she too talkative? Doesn't she listen? Is her voice too squeaky? etc.. But kudos to the author, she's on to a good idea for this type of genre and age group..

Only the Edge knows

This story has considerable potential.The author has an eye for detail. She is able to convey the contrasting emotions well. The story flows easily . There are twists in the plot particularly the cliffhanger end. Unfortunately, the grammer and construction of sentences needs much to be desired. The author should consider hiring a free lance editor to brush the text up. The storyline would stand up more elegantly. then.

The concept is original by virtue of its simplicity and spontanity. It makes you experience the emotions of a three year old child through her own words and eyes. It's got potential but it obviously needs to be developed further. However, the grammer is awful throughout.
One fine morning, she woke up. Unexpectedly , at that moment a phrase crystallized in her mind. It was then that her lips moved and she heard the phrase, " Hello world," that she herself had gleefully spoken. How she giggled. She was overjoyed.