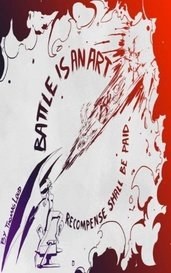 Battle is an Art

Herah had five simple wants in life. One, and this is most important, to honor La Flamme. Two, the ability to create her art in peace, for it was a source of great pride. Three, meet a space Cendre...

A Diamond in the Rough. A lot of Rough.

I have high hopes for your story. Magnus seems like a snarky asshole and I love those guys and the setting is rather interesting as well. You get straight to your point in regards to what the story is about and that's really good. Another thing is that these shadow abilites and hunter pets seem like they're going to be a great and integral part of your story. So, in all honesty, I enjoyed your first chapter.

However, as you can tell by the rating, there are a few issues I feel I should bring up.

First off, the three giant paragraphs that compose your chapter should be broken up into several more bite-size versions. This would really help the reader understand who's talking and what's going on in your story. Because to be honest, I didn't immediately catch on to how Magnus escaped or that he was talking to someone to the professor until after reading those parts over a few times.

Another thing that could've been done better was the introduction to information. The reader doesn't need to immediately know what the imperial knights are doing or what they are meant to do, it might've been even better to give little contex at all in the chase of Magnus. This would've built up a curiosity about the characters invovled in the story and what they were planning on doing, hooking more people to come back and read the next chapter. And when introducing information its always great to have the characters in the story wither notice and think it to themselves or just straight up state it. You've left yourself the perfect avenue for charcters to do their exposition of info thanks to the fact that the main character themselves has no idea what's what either. So use it.

My final issue of notice was capitlization, several times Magnus' name was captilized and this made me overlook it several times as just some word that continued the sentence. Captilization of words help them stick and catch the reader's eyes so you should try to utilize it properly.

I hope you find my criticism welcome and can't wait to see another chapter.

This is definitely something that should be read.
Even with only two chapters out, your story has captured my attention. The MC is established wonderfully, with her personality being clear and easy to read.
This same courtesy can be extended to the establishment of the world, With the dialogue from the illegal ring owner and the situation in the ring handing out important details organically.
No real problem with the story except for its length, which is expected due to it being incomplete and how large your blurb is.
I can't wait for your next chapter, and wich you well on your story.

This is actually quite good. The writing is great, with a few mistakes in spelling here in there but nothing too big. Toboron is amusing in his actions and thoughts and that's enjoyable.

An issue I found, however, was that I'm not too sure on the look of the main character and the two females he encountered. Are they giant animals or human look-a-likes with animal traits. Where did Gwendal get wings?

Another problem was I'm not too sure what all the characters are doing, and that can bug people.

My final real problem, and this might just be due to taste, is the heavy-handed approach with Toboron's and Gemina's relationship. Comes off somewhat forced.

But these problems, though significant, don't ruin the story. And it's overall quality is good.
Can't wait to read another chapter.

This is pretty neat. I rather enjoyed the first five chapters, they gave a nice heavy atmosphere, and the jokes didn't disrupt the flow at all. I only had two real issues, one just a nitpick. The nitpick is that with a lot of the dialogue in Chapters 1-4, if an exclamation or question mark wasn't needed punctuation marks were just missing, again nothing too big, but it was noticeable. My other issue was that the story is somewhat formulaic and standardized, and though this is neither a problem for me personally or me saying that the entire story will be this way. I felt it only fair to say that the so far predictable nature of this makes the story good but not great. I'm pretty sure it'll get better, and as of now I do recommend a read. Just as of now, I don't see anything too surprising or distinctly unique.