Past Producer of USO Entertainment, President entertainment corporation.Veteran of the year by the President. 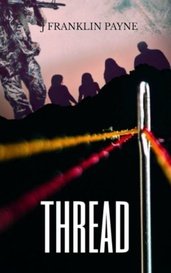 The story of this businessman is so gripping that a reader will surely want to read it in one go. Also, the author’s style of writing is remarkable as he surely knows when and how much to reveal an...

A gripping novel that satisfies the cravings of crime novel fans with suspense, strong villains, and unforeseen twists
Thread by author J. Franklin Payne is an action-packed story about a successful entrepreneur named Kyle Stone and his descent from his idyllic life—his wife, family, and profitable business—toward something more clandestine, more dangerous.
In the beginning of the novel, readers may think that this book is going to follow a simple formula. We learn about Kyle superficially, his successes and everyday life, but away from that domestic existence, it turns out he also has his enemies.
His colleague Howard has filed for a court case against him for breaking franchise laws.
When the court case doesn't go to plan, Kyle and his other colleague David must come up with a plan to enact their revenge. It doesn’t help that his wife Suzette seems to be against him too.
The author incorporates an esoteric angle as Kyle and David seek the help of a witch to help their vendetta against Howard. This is where the book takes an interesting and distinctive turn. Away from all the human drama, the reader sees how this curse begins to unfold and what consequences come with it.
Another factor that I particularly enjoyed about this book was the number of horrible characters; for me, this adds to the tension of a well-written suspense novel. David is often a challenging character to read with his addiction to his uninhibited, decadent life.
Thread is full of surprises lurking around different corners. After the demise of Kyle and David's professional relationship, our protagonist begins working for what can only be described as a clandestine network of people known as “The Family.” Mirroring something you would expect from a gangster film, Kyle seems to be innately good at his new role for this organization, part espionage, part negotiator. He is afforded a new life punctuated with private jets, his drink of choice, tequila and tonic, a new love affair, and luxurious hotel suites. On the other hand, the reader becomes better acquainted with Kyle as we learn about his past. Kyle is a well-crafted, three-dimensional character, and as I am reading the book, I have a clear image of him in my head.
The author flourishes at creating a meaningful arc to Kyle's character. We learn about his father's death, his military career when he was treated as a mere subordinate before he had his business empire. He is a character who, at the start of the book, appears to be an abundance of morals; however, in order to survive, he has to become someone else.
As a novel, it is an entertaining read that is difficult to put down. However, at times, it can read like a never-ending Russian doll. From supernatural elements to sexual assault, flashbacks, a surreal gang, and infidelity, there is so much content for such a short novel that it’s a bit disorienting to keep up. Having said that, there are moments when certain things are repeated, too, that make me wonder why so many people wet themselves when they are scared.

Nevertheless, the author proves successful at keeping us on our toes. I had questions at the very beginning about David: Can he be trusted? What is his intention? These questions make for a good suspense novel in which the reader is complicit from the first page. With a solid protagonist and a fast-paced narrative and the supernatural nuances of the curse of the candles, it is definitely one that can be enjoyed in just a few sittings.