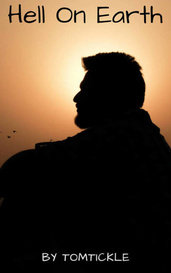 The Apocalypse is nigh--well it was, and then the Devil's son had a change of heart. After striking a deal with his father, the Antichrist has one week to find a person on Earth who is truly good....

Right off the bat, I'd like to discuss what I enjoyed about this story. The first chapter, in my opinion, is the best of all of them. It sets up a very intriguing, eerie scenario--an elderly, wheelchair-bound man whose only goal is to enter into the dreamworld and make it through a mysterious door that promises to renew his youth. It's a fantastic setup. I also liked how it was not all that clear in the beginning whether the dream world was real or whether it was a product of Jon's imagination. The first five chapters in particular are, for the most part, good in building up this narrative.

It is the second half of the book in which I think things go a little off the rails, and this portion of the book could use the most work (spoilers ahead for those of you who haven't read it yet). We learn that Jon is schizophrenic in a way, making up imaginary friends that want to kill people. However, these imaginary friends don't have much in the way of their own personality--Parker and Mona are the most interesting ones, and yet they have the least characterization (they simply want to murder things and act as agents of chaos). Sandy, the one we are supposed to care about the most, merely seems to be there as an object of affection for Jon, with little character traits other than being attractive. Some of the dialogue (particularly in the romantic sections) comes off as cliched. Because this story is so original and unique, you are doing yourself a disservice by not having dialogue that matches the story quality. I also wouldn't call the hamburger stand "Bob's Burgers" for the same reason--this story deserves a hamburger stand with a more original name.

But again, I don't think the final half of the book really does justice to your great setup. What starts out as an interesting story about meditating on youth and a yearning for the old days quickly turns into a medley of too many things going on at once. This story starts from being about a crazy person to being about raising mummies, to being about aliens, to being about finding the lost city of Atlantis, to being about Shadow people, and finally to being about accepting death. Accepting death was the real story all along, and I'm glad the book finally found its way back to that theme. However, there are far too many different, isolated stories told along the way that have nothing to do with accepting death (unless I'm missing some symbolism--in which case, make the symbolism more apparent). These isolated stories depend upon the narrator's psychotic state, and yet the narrator himself knows that he is psychotic--this shouldn't be the case. A person with schizophrenia should not be aware of the fact that they have schizophrenia. Leave it up to the reader to interpret whether or not what the narrator is seeing is real, rather than feel the need to explain it all the time. Another reviewer said there's a lot of telling in this story rather than showing, and I agree--build up the scene for us, don't explain why everything is happening. Just let it happen.

There are also some significant technical issues (spelling, grammar, unnecessary capitalization, punctuation) that hold this story back--this feels like a first draft that, upon some revision and editing, could turn into something great.

Again, you have a lot of good stuff in here--the beginning felt like the setup to a Stephen King story, the meditation on life, death, youth, and old age is intriguing, and the acceptance of death so the narrator is no longer stealing life from others is a solid final revelation. If you just expand those parts of the story and maybe take some of the crazier stuff out (I didn't find the Atlantis bit or the mummy bit necessary), I think you could revise this into something truly special. I might also suggest a title change--I don't think "Dead or Alive" is a good enough title for a story this unique.

PROS: Enthralling setup, intriguing themes on life, death, and aging, imaginative twists.
CONS: Too many isolated stories that don't have much to do with final themes, not a lot of character development outside of the main character, some cliched dialogue, grammar issues.

I hope this review helps, and I hope to see a revised version of this story in the future! You've got a great imagination, and I think if you just rein it in and focus it into the more important parts of the story, you've got something awesome on your hands.

Overall, I enjoyed quite a bit of "8th Round." Though I have only read 3/4 of the work so far, I wanted to go ahead and give a review while my thoughts on the story are still fresh. First off, I think the plot is highly original--another reviewer stated that it was reminiscent of such films as "Groundhog Day" and "Edge of Tomorrow," and in many ways, yes, it is similar. However, I like the notion of getting a longer "round" each time, progressing further into the future before the reset occurs so that more information can be learned. This is different from those two films in that the main character has a constantly expanding set of time to work with.

I also liked the backwards storytelling--I liked how we started out on the last round of the protagonist's run, and we sort of have to keep up as he fills us in on other characters and what they mean to the plot. It reminded me a bit of Christopher Nolan's "Memento," in which not everything is clear at first and we slowly put the pieces together. However--I would recommend letting those pieces stay on the sidelines for a bit longer than you do. Exposition is just sort of thrown at the reader, and by the time we get a few chapters in, there's almost no mystery. Rather than having the main character outline everything for us about time travel, have it be a bit more of a mystery. It also doesn't make sense for him to know certain things--how does he know he only has eight rounds to save the world? Focus more on character building initially, then gradually throw in the explanations for the time travel stuff.

I love how the plot takes place in a ton of different settings all around the globe--let us live in these places, let us read about them, let us read about how the characters react to them, and propel the plot forward without explaining yourself constantly. There will be time to explain later, no need to worry about it right from the word "go." You have some great rapport between characters--let's see more of that! You have some genuinely funny lines in here. I also think the romantic tension between Jakes and Danielle is heartbreaking, especially given the note in the beginning. Can he live this new round without her, even though he loves her? It's a really good setup for some serious drama.

There's also an awesome sense of buildup here--much like Steven Spielberg did with "Jaws," you're sort of holding off from showing the main event (in this case, the apocalypse), instead focusing on building up the suspense. This makes it different from a lot of other apocalyptic stories (for instance, "The Walking Dead"), in that you don't start out with the event in question. The story is more about the mechanisms of the event than the event itself, and that's refreshing.

Two quick fixes--I'd change the name of Jakes' investment company, as "Equinox" I believe is also the name of a fitness organization. Also, is "Jakes" a common name in South Africa? I keep wanting to say "Jake," and I don't know if the "s" is intentional or not (I know another reviewer pointed this out already). I might consider just changing it to "Jake."

The biggest issue with the story is not really in the story itself, but some of the more technical aspects of the writing--grammar, spelling, punctuation, etc. There are some misspellings and some awkward phrasings scattered throughout, making it feel like a rough draft rather than a final product. You are writing (mostly) in present tense, but every now and then you fall back into past tense. I would pick one and stick with it--if I were you, I'd change it to past tense just because that's how most stories are told, and I think it would flow better. Then again, it is a time travel story, so if you can make present tense work for that in the moment stuff, go for it--just be consistent.

Another reviewer stated that they disliked the quotes at the beginning of each chapter--I would actually disagree. I think they're a good way to set up the next part of the story, and it's something that a lot of professional writers do. I loved how you started out with a quote from "Doctor Who." Very fitting.

Again, I think this is an exciting start to something that could be really good--if you just go through this draft and do some heavy-lifting with revision, it could be awesome. Hope this helps.