I'm "Complex". Story teller since I was 4, writer since I learned how. 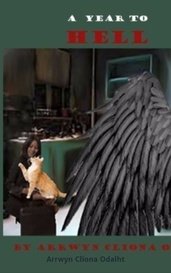 A Year to Hell

Iantha thought there was no reason to keep living until an angel changed her life, but was it for the better, really? Standing just inside her windows was a figure. It was very tall, almost seven ...

The fact that this was written by someone who knows how to write was my first joy. Getting the characters into my head as people from the very beginning is the mark of an accomplished author, I am definitely going to look this lady up on Amazon! I have to know how this ends!!
There were less than 5 spelling or grammatical errors here proving that the author knows how to write, and she announced that this was not a professionally edited draft before the story begins, which I appreciated. The story moves quickly but not so quickly that it's choppy.

THE best I've read on Inkitt!

Mike, you have a fabulous command of the English language! It was such a joy to see the way you handled descriptions. Personally I found the story a tad slow in some places, too much emphasis on getting high, but overall it is a great story. Your handling of the sex scenes impressed me greatly.

Before you attempt to get this professionally published, do go over it again. You have a few places where quotation marks are misused. Editing is never something to rush. If you find yourself getting lost in the story and not looking at the grammar objectively, then it's time to stop editing and put it away for a few hours. What I usually do is go back to the last sentence I remember actually editing and highlight it with color than close the file until I can focus again on the mechanics.

Without a doubt this was the most PROFESSIONAL story I've read on Inkitt. I'll look with joy for the announcement of the published final draft!

Mr. Deve is an accomplished author. The technical qualities of this story were perfect. The concept and plot of the story is, truthfully, the first original story I've ever read! Each step of the story is essential in the context of the whole, but I did find it to be a bit of a slow read. But then, I'm an American accustomed to extreme drama on every page. The very end of the book is a genuine surprise and I expect it was so to the young scientist as well! All in all an enjoyable read with history and mystery. I hope you get it commercially published!

Gripping from the first six words! This author's style is compelling and writing from the perspective of a "modern" teen who has her paradigm shifted is genius. The telling is thoroughly compelling and this edition is obviously not a first draft. Very few spelling or grammar errors! Congratulations on that!

If you want to read a little different take on vampires and werewolves this is it! This is a wonderful read I found nearly impossible to put down (proven by the fact that the sun was coming up before I went to bed)

Review of “Keep Your Promises by Sabitha Kirithaban

You have the great makings of a good story here. Wonderful concepts of description but a bit too wordy.

I realize you are trying to convey how nervous and scared she is, but repeating yourself three times is “ad copy” not literature. A narrative story can not be written like the diary entries of a frightened, overwhelmed 17 year old. If you WANT that kind of writing then date the pages with day and month and write a diary. If you are looking for narrative structure, you need to keep the story in ONE TIME SENSE; either everything is past or present tense (take my word for it, present tense is VERY hard to write well.) Organize the thoughts better. Each paragraph is supposed to present a new idea in the scene, don't break away paragraphs that contain further evidence of the paragraph above it. You don't have to separate dialogue from the enlightening material in the following paragraph.

In one paragraph you say the doctor's eyes are blue, later you say brown. Keep track of your character traits. I always have notes on my characters.

Other than the death of parents, Emma's illness and her attempted suicide, and Scarlett's cheating boyfriend, what problems do Scarlett have? Emma says she was a social butterfly growing up, why does she say everyone hates her now? You don't explain that. If it is just that as a senior in school, she's not part of the “in crowd” big deal! She could still have her own crowd, why does she say she has haters? From what Emma says, she should still have at least a best bud, if not her own crowd. This needs to be brought into the story. Scarlett is going to need friends to find Darcy.

Did Emma give her report to the police when Darcy was kidnapped? And I don't live in any part of the British Commonwealth, but from the way you write, I perceive you are … did Emma put Darcy up for adoption or in a sort of orphanage that allowed her to spend time with her daughter, but the child slept in the facility at night? There is no place like that in America. Either you give up the child or you don't, period.

Depending on which software you used to write this story, there is a function called "spell checker/grammar checker". USE IT. I managed to get through the first chapter but the spelling and grammar mistakes through the fourth paragraph of the second chapter were just to much to bear. So, my PROFESSIONAL advice to you is this: EDIT YOUR WORK before you present it to ANYONE to read. You know very well if you turned in any school paper that looked like this, you would fail! Because of the subject matter, I'm going to assume you are no older than your characters. Which is why your story did not grab me. I finished high school in the 1970s.

HOWEVER your "mystery" about Leah's "love of her life" was well placed. End of first chapter before the reader finds out he's dead, and why Leah and Zoe are no longer friends. I got as far as introduction to obnoxious boy in her school, but you really need to give a little more thought to describing immediate feelings of characters, rather than relying on description of facial expressions, as the facial reaction to emotions is NOT "universal".

Good start! But don't EVER post anything online until the spelling and grammar are perfect. Even if you actually speak without saying every word in a sentence, don't write that way unless you are writing dialogue. That is the ONLY acceptable place for poor English! Never. never, ever in narration!

A few good English errors. I didn't notice any spelling errors but the story is so gripping ..., and horrifying ... I don't think I was looking for technical errors. This author writes very clear pictures of what is necessary for the reader to "see" the story. Just enough environment to set a scene. The interplay of personalities is clear and Angelique's fear is palpable.

You have the makings of a good mystery, I can't say it's horror after reading 13 Chapters. First, do not make a new chapter every time the principles change places, ONLY when the scene changes. That doesn't mean from the basement to the kitchen, that means a change of principle actors in the scene. Also your paragraphs need tightening, which I'm sure you already know. I would suggest less time on specifics of home renovation and more time with the principle mystery which seems to me to be the "tailless rat". If the "horror" is the beast, then saying the "House" doesn't want the renovation is misleading. If it is the HOUSE, then later on, refurbishments should revert ... overnight. THAT would be scary! Or the water spotted walls refuse to be painted over, that kind of thing. wiring snaking out and cutting or tripping people as it gets torn out ... or ... is the "beasty" actually a resident ghost?

I'd be interested in reading the final copy of this story! Keep going!