"When is the right time for anything? Who knows? Living is an art, not a science." -Benjamin Alire Sáenz 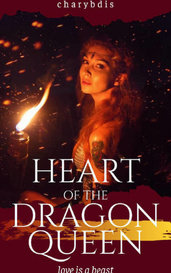 Heart of the Dragon Queen

Seventh in line for a throne she doesn't want, Cressida thinks nothing will keep her from a lifetime of adventure. After months of searching, she discovers a castle only whispered of in dark fairy...

A Mythological Twist on Mermaids

Gotta say, all the Greek mythology references in this story are giving me LIFE. It's a very enjoyable story so far. As someone who grew up in a small town, the little sea village vibes of the main character's hometown feels so real and nostalgic to me. I can't wait to read more about how Aileen and Havelock develop their relationship because they've established great chemistry so quickly! This story will be even better once a few of the grammatical errors are sorted out (a few words are wrong too - like vial instead of vile, small stuff like that). Overall it's a great story and I can't wait for more!

I'm entranced by the world of this novel so far! I can't wait to read more and get a better sense of the world building and learn more about the main character. My main suggestion is for the author to take some extra time to edit the chapters, there are a lot of grammar mistakes that jar the reader out of the story. The dialogue especially needs some TLC - new lines of dialogue should be capitalized, and there's no need for a space between the quotation marks and the words inside them. I like the love story between the assassin's best friend and the princess, but I can't wait to get back to the main character - I miss her!

Honestly, I think this is my favorite story on Inkitt so far. It reads so easily and naturally, and the way people are described are so beautiful and human that it makes me feel like I've really met them. The story and premise itself is so interesting. I've only read four chapters so far, but I couldn't contain my praise. Wow. I can't wait to read the rest!

Can i first say that it's refreshing to find a novel on Inkitt that's not about two straight kids staring at each other? Second, i need to say that this story is SERIOUSLY good. I don't like to leave reviews on stories with only 1 chapter because there's usually so little work with, but this first chapter immersed the reader PERFECTLY into world and plot of the protagonist. There wasn't a wasted word it any slow points at all. My only suggestion is to maybe italicize the flashback portions? There were a few points where I had to reread a sentence or two to figure out when it was taking place. Even that considered, this has a lot of potential! I can't wait to read more!

It's very hard to leave a review on a story with only one chapter written, so my feelings of the work may change as you write more. I have to say that it's good so far! I really feel for the main character - she has a hell of a disease to battle with, by the sounds of it. It's also so refreshing to read a story on here with such polished grammar and lurid descriptions. I can't wait to see this story develop!

When I started this book, i wanted so badly to like it. The beginning really sucked me in, despite being cliche. However, one thing has become infinitely clear to me after reading this far:

The character NEED to be stronger in order for this story to work. ALL OF THEM.

I'm not talking strong as in tough or bada**, I'm talking strong as in they need to be fleshed out and developed. Everything so far has been plot driven (Rebekah hasn't made ONE decision for herself yet - everything happens to her and she just reacts. She needs to be active, not reactive.). The characters just feel 2 dimensional, mostly because they're built on stereotypes, ESPECIALLY the women characters (hint: if the other females in the novel need to be vapid and stuck up (Scarlet, Lizzie, Mom, every girl that Rebekah goes to school with) in order to make the main character likeable, your main character isn't likeable enough).

this is what leads Rebekah and Marcus have so little chemistry, because we as the audience have NO IDEA what makes them tick, let alone what they would see in each other.

What I would suggest you do is sit down with some character sheets and figure out who everyone in this book is, and how that would lead them to interact with each other. What do they do? How do they do things differently than other people? How do they talk? What will they say? What WON'T they say (this is especially important. The characters sometimes overinform each other for the sake of plot. Don't have the characters say things they wouldn't say as people.) The plot can work, but the plot will continue to feel stilted until the characters are driving it.

I don't mean any of this in a harsh or mean way, I just want to see you improve your craft and story. If you want any help or any more advice, feel free to ask me!