Hey, I’m Caitlyn! 24 years young. I’ve been writing and making up stories since I was a kid. I’m also a filmmaker and an aspiring actress. Please enjoy my messed up brain! 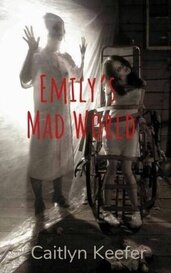 A paraplegic since the age of three, Emily's life has never been easy. Little does she know, her life will change in an instant; kidnapped, her beloved mother murdered in cold blood, and a science ...

A good start - But who’s story is this?

The beginning of the story was the best part, but as someone else commented, Annie’s rescue was far too soon. The summary of the story made it sound like this was going to be about Annie and Travis, but Travis, the supposed main antagonist dies within a few chapters?

And why did Annie not tell her husband what had happened to her? Furthermore, why did her husband decide to just not contact his family for eight years?!

As for Karie and John, I could kind of see the budding romance between them as kids, but not enough. In fact, they don’t even sound like children, especially Karie, who was only nine. In my opinion, John and Karie should’ve already been teens and in a relationship; that way when John left the reader would feel Karie’s heartbreak and their reunion would’ve paid off more.

Also, the “mafia” was too soft. One moment they threaten to kill John if he quits, then the next they don’t seem to care just because he’s in love? That doesn’t make sense.

Also, the wording is strange at times. This could be just because I’m from the United States, but people don’t usually refer to their friends’ parents as “Mum Victoria”, you could just say Victoria instead. And this other thing may be a cultural one too, but what year is this supposed to be in? One minute I feel like it’s the 1800’s or something but then someone mentions about a cell phone so I realize this must be the 21st century.

That being said, why is Karie treated like a trophy, literally? A boxing fight to the death? That doesn’t happen, that’s not even legal. Sam Lee was already apart of a gang, right? So, why not let it be a street fight? And there was no indication that Sam Lee wanted her, only one mention of stalking and that’s it. You need to ‘show’ not ‘tell’.

And the transitions between scenes were confusing; it would’ve been easier to just start a new chapter or use the “~” symbol or something similar instead. You also switched from past tense to present tense a lot, and occasionally you even switched between third and first person.

All in all, the story should’ve been more about Annie and Travis, then the sequel could be about Karie and John.

Your changes were done very well! I’m curious to know who this woman or witch is, and who was murdered? See, you were able to draw your readers in. Only issues is some grammatical errors and writing style, but I’m sure it’ll improve over time. It happens to all of us. Good job! :)