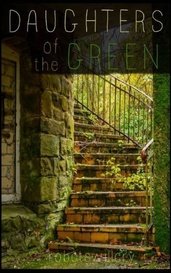 Daughters of the Green

We were going to die. It was that simple. Slowly, surely, the Earth was going to die. They called upon Mother Earth to save us. She brought the Green. Stephanie remembers a time before the Green. A...

She's feisty, he's rich, you know where this is going

First up: I'm reviewing from the perspective of someone who doesn't know anything about this kind of romance-mashup-genre, and who hasn't read much of it. I also haven't read much of this story, probably for that very reason. It's not my thing, and I just couldn't get into it.

But a review was promised, and a review will be given!

Right from the start, you get a sense of Ella. She's the kind of girl who uses 'yeah' in her internal narrative, with all the borderline-arrogance of a drop-dead gorgeous 17 year old who knows men will be fawning/perving over her her whole life and is really looking forward to enjoying the attention/kicking seven shades of hell out of them. Unfortunately for Ella, she's in a whole heap of trouble. Baaaaad trouble. The sort of trouble you can't just kick your way out of. Thankfully for feisty, independent, not-your-average-princess-type Ella, there's a rich man just around the corner to give her a hand while snarking attractively at her.

You get the gist, right? I'm not going to get into that plot, because it isn't my sort of thing and I don't want that to reflect badly on what is probably, if this is your jam, a brilliant story.

The writing is okay. Ella's thoughts are fairly colloquial, as if she's literally sitting in front of you narrating her story, which can be as off-putting as it is a decent way of showing her character. She also doesn't seem entirely convincing as a 17 year old; maybe it's because she's already on her second job when you'd expect her to still be in school. She does seem like a wish-fulfilment protagonist, the sort of girl every woman might wish she was, but again; if that's what the author was going for, it's successful, and it's not necessarily a bad thing.

As other reviews have said, it's a touch rushed. Aiden isn't given much of a chance to be fleshed out beyond a Christian Grey expy (okay, I haven't read that, but I get the vibe) before they get to share a kiss. The line between rushed and fact-paced is a tough one to walk; this just happens to come down on the side of the former. Giving the characters time to breathe, time to have a life outside what's directly relevant to the plot, would help slow this down and really show some character-work.

Like I said, I didn't get far, but that's not really the author's fault. Other people are clearly enjoying this story, and if this is the kind of thing you like, all the evidence says you'll like this one too.

Flashes of brilliance, lots of promise, a couple of faults

(Reviewing from the end of chapter 3, for the benefit of those reading this who aren't the author!)

I can see that the author enjoys writing this! There's obviously a whole world here to explore and they've got it very clear in their mind - just try reading any of the descriptions of places, they're gorgeous! These descriptions shine because they don't just tell you what you see, they tell you of the effect of it on the person looking, which put the reader right in the narrator's shoes. It's a cool trick and one that's difficult to get right. It's not used with the people, however, who you're mostly left to imagine from the dialogue. Massive pages describing each and every fibre of their being isn't necessary, but the occasional bit of physical description wouldn't go amiss so that the reader can see it in their heads a little clearer.

Starting off with the mythology and background is always a nice touch, helping the reader to get immersed quickly in the story, and the whimsical style used here works very well. If I had a suggestion, it would be to break up the sentence structure a bit more. Like with the introduction, there's not much variety in the length of the sentences, which can make it a bit of a struggle to get through. A few short sentences at suitably dramatic moments (of which there are plenty) might help to chop that up nicely.

The plot itself seems like a lot of fun at this early stage: four very different brothers try to persuade the reluctant Yuri that his little worries about odd things in the forest aren't big enough for him to not be king. And the brothers *are* different, you don't even need the occasional 'X was the most Y' to get a feel for who's talking and what they're like. The casual dialogue between them feels realistic and helps to establish their characters. Yuri himself is a bit of a mystery at this point; he comes across as a daydreamer, the sort who spends a lot of time staring out of windows and thinking that the world is so much bigger than anybody imagines, but that's mostly coming from what he says. As a protagonist, he has plenty of the hallmarks of someone interesting, someone the reader wants to follow and discover more about, someone who is going to make good and bad decisions for us to agree with/complain about.

The main problem is quite a common one that I can see; beautiful descriptions of the world aside, it's mostly tell, not show. Managing that split in fantasy, when you have to introduce someone to a whole other world and many other cultures without them feeling like they're being given a lecture, is a pain at the best of times. Here it tips towards the 'lecture' side. Outside the dialogue, you're often told what to think of someone, or what someone is like. Once or twice, especially if it's from someone else's point of view, this is okay and works well to show the relationship between the two people, but it becomes a bit overused here. For example, if you want to tell us someone is rich, describe the jewels that they're wearing; if you want us to see someone as arrogant, tell us how they stand stall and confident, with a slight sneer or something like that. Imagine the physical cues you use to make a judgement about somebody else when you meet them for the first time, and get those written down. They'll help, trust me!

There are quite a few grammatical issues; the tenses switch around in the middle of sentences sometimes, punctuation is occasionally either overused or missing entirely, very occasionally there's a word spelt wrong or in the wrong place in a sentence. It's a draft, though, and it can easily be excused. They don't muddle what's being said and they don't make it hard to understand what's going on, but they are quite jarring and took me out of the story a little bit.

This has gone on a bit longer than I intended...there's a lot of good stuff in here, you can see that from the good reviews! The plot is a great premise and builds up plenty of conflict - between the brothers themselves (who have THE CUTEST brotherly bond ever, trust me), between personal obligation and obligation to the kingdom, between real and present dangers and mysterious and distant ones - and Yuri has a flowy-shirted romantic vibe that is sure to go down well with any estrogen brigade. This is an author who knows her world, knows her characters, knows their story and can't wait to share them with a willing readership. And that's as good a place to start as any!

- Kit x
(sorry about the long paragraphs. I couldn't work out where to break them)